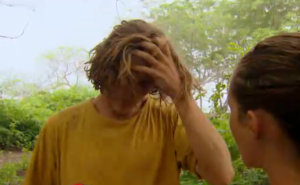 Whoops, sorry.  There he is:

Which brings us to our A-B-C phrase of the week.  Lots of contenders – Always Be Criminal (NaOnka), Always Be Catching Fish (Jane), Always Be Concerned (Marty), Always Be Carolina (Chase) – but with our girl Alina going home it had to be this:

Cause, Alina, you could stand to tone down your intensity a little bit, but don’t change too much.  Stay adorable.  We need more adorable in this world.