Parting Shot: The Hunting of a Snark

From here, courtesy of ellita.

Tagged as Hunting of a Snark, Lewis Carroll, Mahendra Singh

Great Month for Spike Lee and ‘Do the Right Thing’ Tributes

First, Children’s Hospital, which enjoyed an absolutely genius smart-silly-stupid-absurd first season on Adult Swim, ended the episode “Hot Enough For You” with these completely random, wholly enjoyable Do the Right Thing-inspired closing credits.

That was awesome.  But then our friends, the gals over at Broad City, went ahead and blew that out of the water with this unbelievably brilliant Spike Lee homage that served as their season finale:

Well, since all good things (and celebrity deaths) come in threes, we have to imagine there’s a third Spike Lee-esque joint coming down the pike.  Who will it be?  Sesame Street, we’re looking in your direction (oh, looks like these guys already sorta did it).

We’ve had our beefs with Amazon for incorrectly, and sometimes insultingly, suggesting products that we may be interested in, or for misleading us about shipping times.  But that’s nothing like the offense Anderson Cooper has (rightfully) taken to Amazon for selling  a guide to pedophilia.  Last week Cooper tore apart a rookie congresswoman, this week he takes on an Internet giant.

When the Anderson Cooper train is coming through GET OFF THE TRACKS!

ScarJo Goes for the ‘SNL’ Trifecta This Weekend

Don’t forget, Scarlett Johansson returns to Studio 8H for her third hosting turn this weekend.  Inevitably, there will be some variation on this sketch (but if Ryan Reynolds pops up again, we won’t complain):

Did you know that, according to IMDB, ScarJo’s first credited role was as Laura in the 1994 Elijah Wood “family film” North?  In his review of that movie, Roger Ebert said “I hated this movie. Hated, hated, hated, hated, hated this movie. Hated it. Hated every simpering stupid vacant audience-insulting moment of it. Hated the sensibility that thought anyone would like it. Hated the implied insult to the audience by its belief that anyone would be entertained by it,” and then later on Siskel & Ebert remarked, “I hate this movie as much as any movie we’ve ever reviewed on the 19 years we’ve been doing this show.”  So, you know, check your local listings!

Dreams Do Come True: Paul Rudd is in for the Muppet Movie!

It’s official!  As we, and everyone else on the Internet, predicted, Paul Rudd is joining his Knocked Up, Forgetting Sarah Marshall and I Love You Man co-star Jason Segel in The Greatest Muppet Movie Ever Made (but we maintain we called it first).  As soon as word leaked the Segel was writing the movie with his Sarah Marshall director Nicholas Stoller, we began speculating which members of the Apatow-verse would be joining in, and Rudd was at the top of the wish list.  When we learned that Apatow-charter Rashida Jones and comedian of the moment Zach Galifiniakis were also slated to appear, Rudd seemed like an inevitability.  And, now, according to Production Weekly, it’s a reality, with Rudd on board to voice the new “anything Muppet” Walter, who, as we previously noted, will portray Segel’s roommate in the movie.  And this, even without any direct Judd Apatow involvement, cements The Greatest Muppet Movie Ever Made‘s status on the Judd Apatow Chart.

But that’s not all!  Production Weekly also reports that fellow Apatow-charters Jack Black and Jane Lynch are in, as is Rashida Jones’ former TV flame John Krasinksi (who we suggested over a year ago might make for a great Muppet), Krasinki’s Office co-star (as well as Galifiniakis’ Hangover castmate) Ed Helms, Krasinski and Helm’s NBC Thursday night comedy brother Donald Glover, and Danny Trejo, who cameo’d in the Apatow-produced Anchorman (and Modern Family’s Eric Stonestreet, whom we’re having trouble connecting to the rest of the cast).  So in a word: WOW.

Filed under Dunder Mifflin, this is Pam, Freak Out Control, Intersection of the venn diagram of things that I love, Judd Apatow, Mancrush, Muppets

What Was It We Were Mentioning About ‘Late Night With Jimmy’ Fallon Killing It?

Via our friend Blair’s Facebook status.  And she’ll never read this so there’s really no reason to give her credit.  Oh, well, too late.

Filed under Best Show You're Not Watching, Good Humor, Talkies 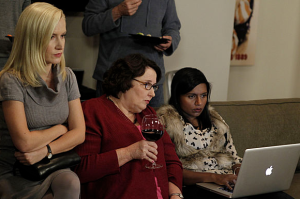 In last night’s The Office episode, “Viewing Party” Michael comes to view Gabe’s presence as a direct threat to his power, and subsequently sabotages said viewing party of Glee.  But wasn’t Michael Scott all in a dramatic tizzy a couple weeks back because he felt that Darryl was challenging his authority?  That just happened, right?  And he had the same reaction to Charles Miner (the indomitable Idris Elba) a couple of seasons ago, didn’t he?  And last year he grew petulant because co-manager Jim gave Phyllis permission to dress as Santa for the Christmas party, in turn sending Michael on a holiday cheer sullying temper tantrum.  Which is to say, we’ve seen it before, and, we think, we’ve seen enough.

END_OF_DOCUMENT_TOKEN_TO_BE_REPLACED

Filed under Analysis, Dillon Panthers, Dunder Mifflin, this is Pam, Must See TV

Tremendous Boomer Esiason Spit-Take: Was That in the Cincinnati Bengals Circa 1988 Playbook?

Sometimes life just hands you a gift, whether it’s turning on the TV in the morning to find Regis inadvertently giving Meryl Streep a heart attack, or turning on the TV at night to witness Anderson Cooper absolutely destroy an opportunistic, insipid politician.  So this morning, while brushing out teeth, we flipped on the tube to see what was happening with WFAN’s Boomer & Carton, simulcast on the MSG Network, and, well, our birthday present came early:

Enlighten us, Boomer: which play was that?