Must Flee TV: ‘SNL’ Says Goodbye to Kristen Wiig – We Know What We Got When It’s Gone

For the last week we’ve been taking a look at NBC’s Thursday night comedies, but with Kristen Wiig’s sendoff on ‘SNL’ this past weekend we decided to add her departure to the conversation.

It’s not worth going into detail about how the season finale of SNL – and the season as a whole – was middling.  The Mick Jagger-hosted episode was a hit-or-miss mixed bag which typifies nearly every episode and every season.  As we’ve learned from several seasons of recaps and now over a decade-and-a-half of religious viewing, that’s the show.  It will never be too far up or too far down, so just try to enjoy it.  What is worth discussing, as all of the internet has been doing for the past two days, is the exit of Kristen Wiig after seven stellar seasons, leaving behind a body of work that positions her as arguably the strongest female cast member of all-time.

END_OF_DOCUMENT_TOKEN_TO_BE_REPLACED

Filed under Analysis, Be careful what you wish for, Good Humor, Mancrush, Must Flee TV, Saturday Night Live, Yvonne Hudson

Did the Oscars Set Rip-Off ‘Saturday Night Live’ Circa 1985?

Well, perhaps it’s reparations for SNL stealing Billy Crystal’s mildly racist black people at the movies joke, but it appears that Crystal and the last night’s Academy Award’s telecast stole their set from the one used in Studio 8H during Season 11 (the notorious Robert Downey Jr-Anthony Michael Hall-Randy Quaid interlude).  The similarity is too hard to ignore. 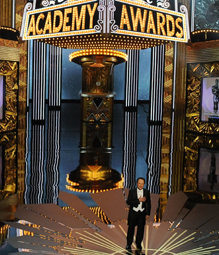 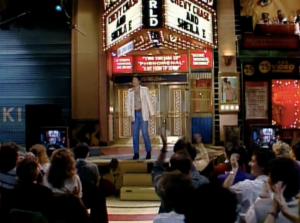 Over on the wonderful Splitsider it’s “Women in Comedy Week,” so perhaps that’s why today we had the search term “best female cast members in snl history.”  If that’s the case, we welcome those readers.  And if that’s not why you’re here, we’re still thrilled to have you.

What would bring you to this site would most likely be a pair of in-depth SNL posts we’ve presented in previous years.  The first, Lorne Michaels Dismisses Michaela Watkins and Casey Wilson & It Makes Sense: SNL Past, Present and Future, we put together in the fall of 2009 to address concerns of SNL restricting its female constituency.  The second, The Real Women of SNL: They are Fambily; Plus: a Totally Unnecessary Look Back at the History of Female Not Yet Ready for Primetime Players, we posted last November following the SNL compilation special celebrating its female cast members, capitalizing on the momentum begun when Betty White hosted earlier in the year.  We think that both posts are two of our best, most informative pieces, so we’re happy to have the chance to link to them again.  And, for further reading, we recommend The Groundbreaking Women of Sketch Comedy, one of contributions to the aforementioned Women of Comedy Week on Slipsider.

And, of course, we’re going to leave you with an SNL sketch focused on the female contingent.  But instead of looking back on the past greats, let’s look forward to the future of women on SNL:

The Real Women of SNL: They are Fambily; Plus: a Totally Unnecesary Look Back at the History of Female Not Yet Ready for Primetime Players

Well, despite our reminder to you last week, we eagerly arrived home on Monday night only to be severely disappointed when we realized that we had neglected to set our DVR to record the Women of SNL special.  We had been looking forward to it ever since Jon Hamm delivered his goodbyes the day before, but the thought never occurred to us that our SNL season pass would not apply to the female-centric primetime special.  OUR BAD.

To add to our dismay, neither NBC.com nor Hulu is hosting the full special.  However, it appears that the only original material included a few one-on-one interviews and this excellent take on the Real Housewives (we’re going to go ahead and say they’re primarily targeting RH of NJ over the other installments, with Amy Poehler, Julia Louis-Dreyfus and Laraine Newman channeling the nascent RH of Beverly Hills via satellite).

END_OF_DOCUMENT_TOKEN_TO_BE_REPLACED

EW reports that the lady ghosts of Saturday Night Live past will reunite on November 1 for “The Women of SNL,” a two-hour prime time tribute to such greats as Siobhan Fallon and Melanie Hutsell.  But wait, didn’t they already do this in May?  And then again two weeks ago?  Well, I guess SNL has shown time and time again that it’s never heard the term “too much of a good thing,” nor the phrase “You brought back Amy Poehler, Tina Fey, Rachel Dratch and Maya Rudolph for the Betty White episode last season and then again in this season’s premiere.  Don’t you think that’s enough?”  But we also know the show has no reservations about repeating itself.

Let’s hope the show, which will be comprised of old sketches as well as new material, will include some of these classics, and nothing with Gilly or Penelope or anything else terrible.

But all kidding aside, where’s Jan Hooks on that Murderer’s Row-esqe lineup?  She was the best lady on there in the late 80s/early 90s and we’d love to see her go up against the youngins,  sort of like when Rocky fought Mason “The Line” Dixon.  And her appearances on 30 Rock weren’t enough to quench our Hooks-thirst, nor they did truly demonstrate her versatility.

END_OF_DOCUMENT_TOKEN_TO_BE_REPLACED

It’s hard to believe that a year has passed by since we waved goodbye to Michaela Watkins (we hardly knew ye) and Casey Wilson (probably for the best) and welcomed with skeptical arms the rookies Jenny Slate and Nasim Pedrad.  And it’s sad to report that a year later we’re already saying goodbye to the former of that dynamic young duo.  And once again, the changes are sure to raise eyebrows.  However, this time around, we don’t have a good theory as to what precipitated the moves.

With Will Forte’s departure two weeks ago the whispers began to circulate and the dominoes began to fall.  Except, they really didn’t fall so much as erect themselves next to already firmly planted playing pieces, with Taran Killam (best known from Scrubs), Paul Brittain and Vanessa Bayer from the iO Chicago, and Jay Pharoah, a comedian and talented impressionist, joining the cast, while veterans Andy Samberg, Jason Sudeikis, Kenan Thompson – rumored to possibly be following Forte out the door – remain (as of press time) at their posts.  So it came as a bit of a shock when word got out yesterday that the show had released a cast member, but not one of its established male veterans with s burgeoning film careers (or even Kristen Wiig, who may have already over-stayed her welcome a season or two), but, instead, Slate, who had only put in a season’s worth of work.

Now, if you recall last year’s history lesson on women & SNL, you’ll recall that going into the season with four women (Slate, Pedrad, Wiig & Abby Elliott most recently) was on the high side.  In fact, going a whole season with four veteran female cast members is just about as good as it’s ever been on the show.  So, with the addition of Bayer, it’s not surprising that SNL & head honcho Lorne Michaels decided to cut loose a lady.  It was a numbers game.  That we understand.  But then why add one in the first place?