It all started many years ago when I was an assistant arts editor of the Tufts Daily, Tufts University’s daily periodical.  I remarked one day to a fellow arts editor that I wanted to write an article about the recent (at that time) slate of films starring Ben Stiller, Vince Vaughn, Jack Black, Owen and Luke Wilson, exploring the connections between the actors and filmmakers.  Entertainment Weekly dubbed them the “Slacker Pack” and they were also later known as the “Frat Pack,” (I had actually had this article fun-tacked to my wall; I can’t recall if it served as inspiration or just evidence of my theory).  Later thinking about The Cable Guy and doing some more recon, I started to think this all went back to “The Ben Stiller Show,” which featured Stiller as well as young comedians Bob Odenkirk, Janeane Garafalo and Andy Dick.  After checking some IMDb trivia, I discovered that years before a college student named Jenelle Riley wrote her graduate thesis on “The Ben Stiller Show’s effect on comedy.”  Thus, I felt like I had been scooped (and I’m sure with superior arguments).

During this research I learned that “The Ben Stiller Show” was also co-created and exec-produced by Judd Apatow.  I knew the name, and knew that he was behind “Freaks and Geeks,” a critically lauded program that I regrettably missed (airing on Saturday nights didn’t help.  Nor did the pre-college high school crunch), as well as “Undeclared,” (which I actually briefly watched, if only because I was a Freshman at the time just like the characters on the show), but that was about as much as I knew about Apatow.  Even a quick check of his IMDb profile didn’t provide much more info. However, things quickly started to change.

The summer after I graduated The 40 Year-Old Virgin was released, and while it didn’t quite make Apatow a household name it achieve a level of success I knew that he had failed to reach though television.  In addition, it featured many actors who I admired from other projects, like Paul Rudd and Elizabeth Banks from Wet Hot American Summer and Jane Lynch, a regular of the Christopher Guest acting troupe (see: Best in Show).  This started the ball rolling.  Then the following spring, at the behest of a friend who I owe a great debt of gratitude I finally caught up on “Freaks and Geeks.”  Well, devoured it.  And, immediately after finishing, I revisited “Undeclared,” and while it might not be as emotionally on-point as its   predecessor, it certainly was nearly as enjoyable.  But as I watched these two shows, I began to see familiar faces, from both shows and from other projects.  There was Jason Segel, who I just discovered on “How I Met Your Mother,” on both shows as two very different characters, but both wonderfully portrayed.  There was Rashida Jones popping up in one episode of F&G; Jenna Fischer appearing in two episodes of “Undeclared;” Lizzy Caplan from Mean Girls on F&G; Amy Poehler as an RA on “Undeclared;”  Jason Schwartzman dealing fake IDs on F&G. And of course you had Ben Stiller guesting on both series, and Will Ferrell appearing on the latter.  As I completed both shows, looking up  cast lists after almost every episode, it soon became clear to me that I was onto something.  And it wasn’t just actors.  A pre-“Amazing Race” Mike White served as a writer on Freaks and Geeks (as well as a bit part as Kim Kelly’s older brother) and later wrote Orange County, which was then produced by frequent F&G director Jake Kasdan;  Paul Feig, co-creator of “Freaks and Geeks” and author of Superstud: Or How I Became a 24-Year Old Virgin had been directing “Arrested Development” (RIP) and “The Office.”  From the thoughts about the Slacker Pack to the “Ben Stiller Show,” it was now coming into focus that there was a greater web here, one that went back to Judd Apatow.

On a Greyhound bus ride to Boston one Saturday I began sketching out the connections, first on the back of a Metro newspaper, and then, when that became too cluttered, in my notebook.  I didn’t know what I would do with it, but I thought I should keep at it and make a final clean version.  Now this was even before Knocked Up arrived in theaters the following summer, before Judd Apatow and his ensemble really broke though, and I hadn’t really seen this argument made.  I went to Target one day and bought a large piece of oak tag on which I would create a presentation piece with pretty colors and a key.

Alas, I never got around to it.  And in the intervening years Apatow and his disciples have basically remade the comedy scene, to the point that even a movie that Apatow is completely uninvolved with is still compared to the films he has directed and produced; it’s hard to read a review of a modern comedy without finding his name referenced.  And in that time his main players, Seth Rogen, Rudd, Segel, Jonah Hill, have basically become stars (see the recent Vanity Fair Spread).  And the frequent connections to Judd Apatow were obviously noticed and written about.  I’m not ashamed (just frustrated) to say that Gawker posted a similar chart last year, and it seemed like Entertainment Weekly, again, had put the pieces together as well, printing this chart, which I’ve saved as both motivation and as a symbol of what I could have done.

However, despite the thousands of words that have been already written about Judd Apatow and his effect, and the numerous visual representations, I still hadn’t seen anything approaching the comprehensiveness of my chart.  And when I was laid off earlier this year I decided, even if the moment had passed, I would finally finish the project.  Now this proved exceedingly more difficult with the number of additions to the Apatow cannon (Knocked Up, Superbad, Forgetting Sarah Marshall, etc.), but it’s only made the challenge more necessary and rewarding.  Now, finally, after nearly 3 years of planning, with seeds planted years before that, I’m happy to finally present the Judd Apatow Effect (see down below for further notes on who made the cut and why):

After considering many formats, I decided on the one you see above, utilizing color-coded bubbles to denote the # of Apatow connections and color-coded lines to indicate from which branch of the Apatow tree we would find said connections.  I decided that it would be too confusing/messy/complex to create a line/color for each project (like the Gawker chart did), so I broke the projects down into 7 different groups that comprised the bulk of Apatow’s work: “The Ben Stiller Show and the Cable Guy,” (grouped together because of the number of similar faces between the two projects); “The Larry Sanders Show,” (this was a late addition.  Since Judd Apatow was not a creator or initially an executive producer I was going to exclude it, but later reversed that decision); “Freeks and Geeks” and “Undeclared;” Apatow directed films; Apatow produced films (excluding those also produced by Adam McKay); Apatow & McKay produced films; and Fun with Dick and Jane and You Don’t Mess with the Zohan, two films you might be surprised to learn were co-written by Apatow.  I’ve also included two other lines to link names to non-Apatow projects or filmmakers.  The gray lines link Apatow-connected talent to unrelated projects; the magenta will be used to link individuals not directly related to Apatow (this phase of the chart is still under construction).  I’ve tried not to include connections to pilots that were not picked up, like “Sick in the Head” (although you should look up these projects and wonder what might have been), and also disregarded early Apatow productions Celtic Pride and Heavyweights for what I’m going to just claim are obvious reasons.  For the bubbles, I’ve tried to also use both their size and proximity to the center indicate number of connections as well as how influential and important they are in the Apatow cannon.  Also, size preference is given to actors who have bigger roles, but possibly fewer connections.  For example, David Krumholtz has four produced Apatow connections, but none of them in lead roles, whereas James Franco has three, but two were as star (and one cameo in Knocked Up).  I’ve also used white text to represent the non-actors (writers, directors, producers, etc).  If someone has served as both an actor and in another capacity (for example, Harold Ramis as Seth Rogen’s father in Knocked Up and also the writer/director of Year One), you’ll find their first name in black font and last name in white.

When I first sketched out the chart years ago (see below), I tried to organize the bubbles by related projects and by the works that the individuals were most known for and/or influential to.  Thus, I broke out the names into several sections (quadrants?), which I kept for the most part when I began the updated chart above.  On the lower left are actors related to the “Ben Stiller Show,” as well as those involved with “Mr. Show with Bob and David,” and the The Cable Guy. To the immediate left of Apatow is Paul Feig, who earned his proximity to Apatow by being the inspiration for “Freaks and Geeks.”  From Feig we move out to the “Arrested and Development” and “The Office” areas, with both shows featuring actors appearing in Apatow projects.  A small group of SNL talent, and then we move into the thickest section, that which is comprised of the Apatow regulars.  This area is really a mix between “Freaks and Geeks” and “Undeclared” stalwarts and then actors who appeared in Apatow directed and/or produced films (excluding those also produced by Adam McKay).  Bottom right are the staples in Adam McKay/Will Ferrell films and also the key players from the vaunted “Slacker Pack,” who started this whole thing in the first place. 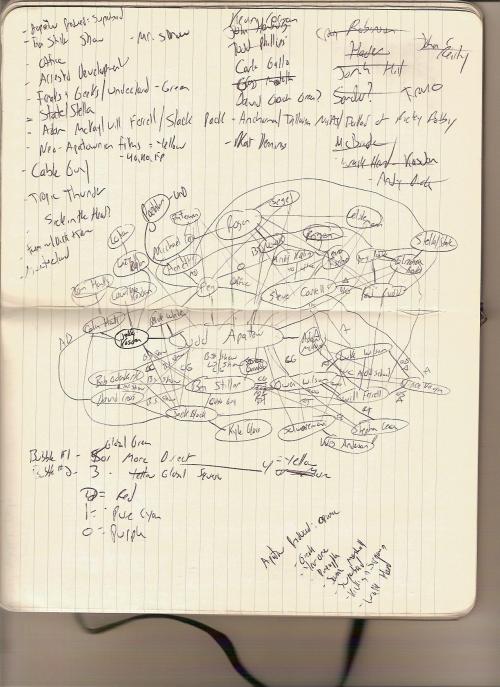