Celebrate Canada Day the right way, with our neighbor to the north’s greatest teen soap opera. No, no, not Degrassi, but Fifteen. It was the show that didn’t make you think “Hmm, one day that Billy kid is going to be a star and also super good-looking,” but twenty years later Ryan Reynolds is just that (well, maybe just the latter, depending on how RIPD performs), and Fifteen remains the gold standard of Canadian melodramas in which teenagers have conversations as if they were bitter, sad, empty thirty-year-olds.

Sure, we could have posted this April Fools Family Matters Kickstarter spoof on April 1, but that would have been so predictable and obvious, so totally against the spirit of that day of punking. Yes, ten days later on April 11 feels much more appropriate to bring you our first Reginald VelJohnson in Uniform in quite some time.

Inspired by the recent record-breaking success of the Veronica Mars movie Kickstarter, those pranksters over at Funny or Die unleashed a series of spoof campaigns for big screen versions of several classic television shows, including Darkwing Duck, Wings and Dinosaurs. Also amongst this impressive roster of past series looking for a second life is the legendary sitcom, the  TGIF anchor, Family Matters. And who better to be the face of this venture than Carl Winslow himself, Reginald VelJ.

In the proposed film the Winslow family is kidnapped by a mysterious villain who may or may not be someone they know, perhaps someone very close to them, perhaps even someone who lives right next door. With his family in captivity, Carl goes into Liam Neeson Taken mode, his deep baritone striking fear into any would be evildoers. 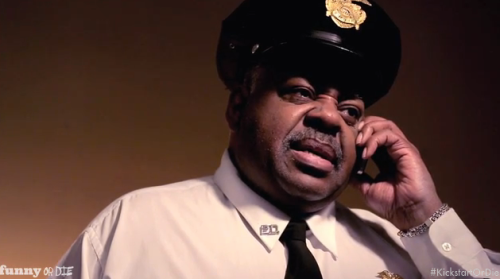 So do your part to bring Carl Winslow (and Reginald VelJohnson in uniform) to the big screen! Donate today! (or ten days ago)

Pi Day is here again, and we’re going it commemorate the way we always do, not by acknowledging that π is perhaps the most important mathematical constant, but by celebrating the only Pi more important than 3.1415, that being, of course, the pizza pie. And who are the only people who love a good pizza pie more than we do? No one. No one does. But who loves a good pizza pie as much as we do? The Teenage Mutant Ninja Turtles. Duh! Whether in animated form or pixellated or live-action or live in concert, there’s no questioning the young amphibian fighters zeal for pizza (there is, however, some question about their topping choices). If only eating that much pizza would give us super strength and agility, instead of just making us sleepy and languid.

Let’s just hope that Michael Bay gets the pizza right in the upcoming TMNT reboot. Completely abandoning their original origin and turning them  into aliens (and contradicting their very name) is one thing, failing to honor their insatiable love of pizza is a whole ‘nother. That’s heresy.

Time to Time Tunnel: A Jumped the Snark Family Tradition

Well, even without the unfortunate connection between the Adventures of Pete & Pete theme song and the once-in-several-lifetimes hurricane that caused so much damage and heartache, the redhead brothers from Wellsville would still be dominating this late October-early November stretch. First, there was “Halloweenie” and, now, we’re once again ready to jump back through the Time Tunnel. Truly, one of our nation’s greatest holidays, and one of our country’s all-time great television shows.

As always, be sure to stock up on your riboflavin. And be safe out there.

Filed under Back to the Past, Krebstar, Lady Holiday, Snick

Hey Sandy, you may be a storm to beat all storms, a monster of meteorological proportions, and you may be a theme song whose words are difficult to understand, but you will never, ever, stop Little Pete from celebrating Halloween. Nothing ever will.

Now a hurricane named Hurricane Little Pete, that would be interesting.

A Newsroom A Day: Rain and Thunder, Wind and Haze Edition

But we’re bound for better days.

Filed under A Newsroom A Day, Lady Holiday, TGIF

We’re big enough to admit when we’re wrong, and we were dead wrong when we suggested earlier this week that Tom Hanks’s breathtaking slam poetry performance on Late Night with Jimmy Fallon was the grand finale to what had been a stellar week of appearances on talk shows and telethons. We don’t want to go out on a limb and say that he saved the best for last  – because a) we don’t want to be wrong again, and b) we hope there’s still more to come (a visit to Good Day New York, perhaps? – but the self-proclaimed (and rightly so) living legend may have topped himself again last night, as he stopped by The Colbert Report to suggest a few affordable costumes for some good, old-fashioned Spooky Time Halloween Fun (but no Josh Baskin?).

[In an interesting twist, Colbert appeared earlier that night on the latest Office, as case of someone we adore popping up on one of our favorite shows, only to have the person we adore the most pop up on Colbert’s own show later in the evening. Sort of a Russian nesting doll kinda thing]

When will the government go ahead and declare Tom Hanks a national landmark already? That’s Day One stuff.