As I mentioned yesterday, I fell hard for this year’s World Cup, watching more soccer than I ever imagined I could, transfixed by matches like Ivory Coast vs. Greece, arranging my schedule around France vs. Switzerland. But even though I watched the majority of knockout games and an entirely unnecessary amount of group games, regardless of the matchup, it was the U.S. Men’s National Team that really stole my heart and refused to let go (despite only winning one of four games, and losing their last two. But we won’t focus on that). I didn’t know much about the team before the tournament, other than that Landon Donovan was not on the team and Tim Howard is really, really good and Clint Dempsey is not Clint Mathis. But by the time the USMNT rolled into Salvador’s Arena Fonte Nova to take on Belgium we could roll off the names Michael Bradley and Jermaine Jones and Kyle Beckerman and DeAndre Yedlin like we had been following the club for years. In a truly abbreviated amount of time the USMNT became our team the way that the New York Rangers are our team, and as we lived and died with the Broadway Blueshirts into the Stanley Cup Final, we felt similarly about the USA squad. And even though the dream only lasted a couple of weeks, our bond was deep, if only so brief.

But a few days ago we stumbled upon Inside: U.S. Soccer’s March to Brazil, an ESPN Films series covering the journey of the USA team from the World Cup qualifiers to their departure for Brasil, and all the roster changes and training sessions and Jürgen Klinsmannisms in between. And since beginning the series I’ve been obsessed. It’s just like in 6th Grade when everyone fell in love with Green Day’s Dookie (or so they professed) and wrote the band’s name on their backpacks with Wite-Out and then discovered their early stuff like 39/Smooth and Kerplunk (except in my case it would have been Billy Joel and collecting all of his albums that predate his Greatest Hits Volume 1 & Volume 2). March to Brazil is the USMNT’s early stuff, and I’m really digging it. Sure, they’re raw and unrefined, and there will be some personnel changes before they settle on the definitive lineup, but the soul is there.

But as much as I’ve enjoyed this series, learning the background of these players that I cheered so hard for just two weeks ago, there was something else that I found absolutely stunning: Bruce Vilanch was a member of the USMNT.

Well, maybe not exactly, but he definitely makes an appearance in Part 2, evidently having traveled on the same flight as Defender Omar Gonzalez. Take a look:

Did you catch him? Look again:

Let’s go in for a closer look: 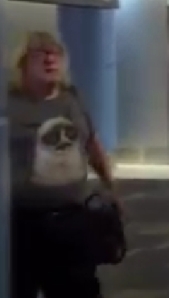 Well, if the one size too small graphic t-shirt and red glasses don’t give it away, then the blond Fry Guy hair sure does. I mean, it can’t be, but it’s gotta be:

Now, as I said, I’ve watched a Bruce Vilanch-worth of USA soccer and haven’t seen the writer-comedian anywhere else, but is it possible that the Off-Center Square was Jürgen Klinsmann’s secret weapon? Did Klinsmann do what Whoopi and Billy have done before him and Get Bruce? Did Vilanch keep Michael Bradley at ease with his playful, suggestive puns? Did he help immerse Jermaine Jones and Julian Green in American culture? Did he trade hair secrets with Graham Zusi and Mix Diskerud? Or maybe, just maybe, he was making a surprise cameo in Kyle Beckerman’s engagement photos? Whatever the reason, Vilanch needs to be on the roster for 2018.

We’ll never be able to beat the Germans by playing their game. We need to create our own American style, embrace what makes our country unique. Maybe, just maybe, Bruce Vilanch is the key.

Filed under Freak Out Control, Huh?, Intersection of the venn diagram of things that I love, Match Games, Matt Christopher Books, Monster Mash, What? Too fabulous?

Do you smell what the Colby is cooking?

A little over thirteen years after his first memorable appearance, 3rd Rock from the Sun star French Stewart made an unexpected return to Jeopardy this week, under the obvious pseudonym Barry Peterson. Unfortunately, even though he’s learned to open his eyes, he once again failed in his promise to bloom in Double Jeopardy.

(or is it Jimmy Fallon, pulling of a brilliant piece of performance art?) 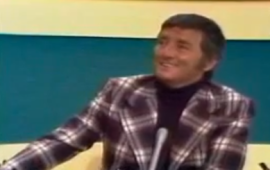 We vaguely remember seeing Match Game as a young child, far too young to really understand the game and the dated references, let alone the suggestive material, and we certainly had no concept of who the panelists were.  But our personal connection to Match Game came later in the mid-2000s when it was in constant reruns on GSN (né The Game Show Network).  At this time our father had undergone a silly surgery that involved part of his leg being refashioned into his jaw.  While he spent an extended period of time in the hospital recuperating and learning how to be a bionic man, we spent an extended period of time watching reruns of The Match Game, which seemed to run on two-hour blocks, one after another after another.  It’s weird to say – perhaps even somewhat morbid – but Match Game reminds of us good times spent with our family in a cold, sterile hospital room, munching on the spongy bread rolls my dad stowed away in the drawers that became his for two weeks.  So to see Richard Dawson go is to see a friend go, someone who helped get our family through a  particularly difficult time.

But even without Match Game‘s role as family therapy, we still would have a special affection for the show, because it revealed to us, for the first time, that people in the 70s (“old people”) could be funny.  That TV could be loose, freewheeling, dangerous.  There’s a lot that Dawson, Reilly, Somers, Betty White, Fannie Flagg, et al, got away with then that they probably couldn’t today (except for Betty White, since she’s been certified as a national treasure and the rule has been firmly established that the dirtier an older person is the funnier he or she is.  Direct correlation).  Yes, we all remember the gaffes on shows like The Newlywed Game, but those were more the exception than the rule.  Match Game was a party, a kegger, and we were invited.

And if Gene Rayburn was throwing that party, and Charles Nelson Reilly and Brett Somers were the comedy tag-team trouble makers bringing the beer, then Richard Dawson was the preternaturally cool guy that everyone wanted to talk to.  He oozed charisma, smooth and confident, pulling off a turtle neck and loud blazer combo like no one before and no one after. Reilly and Somers gave the party laughs, Dawson gave it cred; the boys came for the alcohol and the fun, the young, pretty girls came for Dawson.  And, indeed, everyone literally wanted to talk to him, as he became such a popular choice in the final “Super Match” round that for a time contestants were forbidden from  selecting him.  And it was this unique acumen in the final rounds that was partly the inspiration for Family Feud, asking 100 people an inane question and listing the top answers.  Of course, the other, more important, part of the inspiration was Dawson’s immense popularity, so big, in fact, that he had to start his own party.  He may perhaps be the only game show panelist whose performance demanded a spin-off, a celebrity panelist who became a greater celebrity because of it.

So, yes, most people will remember Richard Dawson as the older, maybe even kinda creepy, guy who kissed every woman on Family Feud.  But we’ll remember him as the laid-back, vaguely British guy on Match Game whom every woman wanted to kiss.  And who, along with Reilly, Somers and Rayburn, gave our family a little cheer when we needed it, even if the party ended thirty years prior, the hangovers long since worn off, all four now gone off to that bright game show set in the sky.

One more time, a round of applause for Richard Dawson:

This was another lay-up: “charles nelson reilly”

Still waiting for The Life of Reilly to arrive on Netflix.

But weren’t late 80s game show prizes the worst?  They just don’t hold up.  A video word processor?  They were so close to a computer!  And between Remote Control and Double Dare I think Casio gave away more keyboards in the 1980s than they actually sold.

(And yet all those insipid wastecases on the Real World-Road Rules Challenge continue to live happy, healthy lives.  And Jesse Camp, I assume)