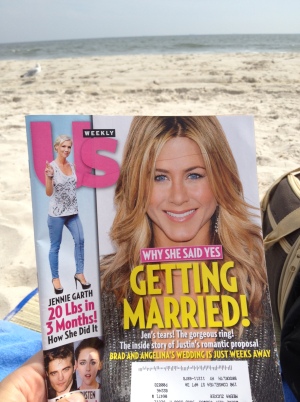 Last week the New York Yankees headed down to D.C. for an interleague matchup with the Nationals, just a week after the Mets also visited the nation’s capital to take on their division rivals.  Now we’re generally enormous Mets fans, but this year our enthusiasm is even more fervent than usual, with a roster that’s featured thus far an especially young, gritty and fun team, a Mets team we’re proud to watch.  And not only do we watch religiously, we also spend far too much time following Mets beat reporters on Twitter, obsessively checking the Mets blog, and reading articles by local sports columnists.  So with the amount of attention we grant to NY baseball, we couldn’t help but notice some similarities on the city’s back pages when the Mets and Yankees each took a turn against the Nationals. 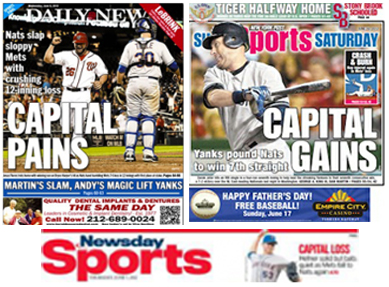 It’s not out of the ordinary to see two very similar headlines among the city’s big three commuter papers (and sometimes three similar headlines), but those instances usually occur on the same day, when they can point to the rapid speed of overnight journalism as a reason for the doppelgänger.  When you have three hours to turn around a newspaper, and, often, much less time to write and set the back page, it’s not surprising that the Post may print the same or a very similar headline as Newsday (like yesterday, for example) – great journalistic minds think alike – but in the triad above the Newsday super-headline was printed the day after the Daily News‘s “Capital Pains” headline (and after a different but still excruciating Mets loss).  The Post headline, “Capital Gains,” came nearly a week later (after the Yankees handed the Mets three more excruciating losses), so certainly there was plenty of time to see the two prior “Capital” back pages and brainstorm some other DC-related copy.  But, we reckon, in the newspaper world you just can’t turn down a good pun.  And we respect that.