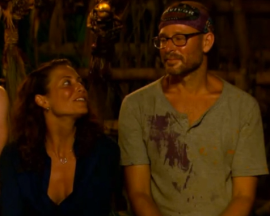 Before we dig deep into this week’s episode of Survivor: Caramoan – Fans vs. Favorites 2 Legit 2 Quit, we owe you, the loyal reader, an apology. You see, we had gotten so wrapped up in the sad, soul-sucking sagas of Shamar and Brandon that we had forgotten about Former Federal Agent Fillip(?). Specifically, we had forgotten how capable he was of equal soul-sucking, his stewardship of an imaginary corporation (painfully imaginary to everyone else but him) serving to dominate camp life and suffocating other players. We had hoped – erroneously – that the exit of Shamar and Brandon, two divisive but attention grabbing personalities, would open the game up. Instead, it just passed the speaking baton to the equal of three evils. Not that FFAF is complaining, being the singular intolerable, maddening, petulant male personality left only enhances his chances of making it to the end.

However, Fillip has some flaws in his game. Namely, he thinks he’s running some kind of top secret covert operation and explains this to every player he encounters, creating something more akin to a completely obvious overt debacle. But in addition to his delusions of grandeur, FFAF is also incredibly sensitive. He is easily rattled when someone challenges his leadership and integrity, and he demonstrates this trait when the Favorites returned to camp after they evicted Brandon from the house. Wearing the classic tucked in poncho characteristic of all great CEOs, Fillip was so hurt that Brandon said such mean, unprovoked things about him, and no one stood up for poor FFAF. Corinne jumped in too, saying how uncool it was for Brandon to only pick on her and Fill, that she sympathized with Fill’s frustration and anger with the rest of BeKool for not stepping up to the plate. And this made up The Specialist’s mind once and for all: he needs to get rid of Corinne, because her commiseration clearly makes her the biggest threat, for some reason entirely unclear to us. But that’s why he’s The Specialist and we’re just a dude writing a blog and not running a made-up paramilitary organization.

END_OF_DOCUMENT_TOKEN_TO_BE_REPLACED

Do you smell what the Colby is cooking?

A little over thirteen years after his first memorable appearance, 3rd Rock from the Sun star French Stewart made an unexpected return to Jeopardy this week, under the obvious pseudonym Barry Peterson. Unfortunately, even though he’s learned to open his eyes, he once again failed in his promise to bloom in Double Jeopardy.

(or is it Jimmy Fallon, pulling of a brilliant piece of performance art?)