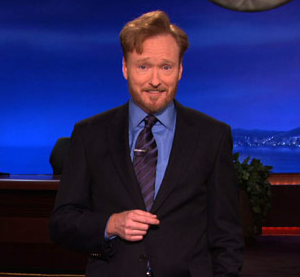 So it happened!  Conan O’Brien finally returned to TV, this time taking his talents to the basic cable shores of TBS.  The anticipation was palpable, and at 11pm EST Monday night we turned our TVs to see the redhead comedian’s triumphant, cathartic, possibly historic, debut.

And then at midnight, after Conan finished jamming with buddy Jack White, he signed off and George Lopez came on, an hour later than usual, but, with Daylight Saving time having just gone into effect, perhaps completely in line with our circadian rhythms.

And, well, the world had not changed.

END_OF_DOCUMENT_TOKEN_TO_BE_REPLACED

Filed under Analysis, Good Humor, Interweb, Is That Still On?, Talkies

Danza Moments of the Week: Back in the Habit

A couple weeks back Tony Danza was nice enough to get into his time machine in order to perform a horribly outdated, rhythmless, patently offensive rap.  Apparently that went over so well that he decided to turn his standard birthday song into a hip hop ditty (for the principal!).

No, no one is smiling.  And while she’s not wishing that you would disappear, she probably would have preferred it if you spared us all the minstrel show.

And it was a two-fer Friday night with two back-to-back episodes of Teach, so here’s a bonus moment of the week.  Somebody has a crush!

BURNED, DANZA!!!!!  OUCH!  And Chloe adding insult to injury with that glasses crack, no less.  Nice work, kid (although, that doesn’t appear to be a regulation school uniform.  Guess it was casual Friday).

And in case you’re still skeptical out there:

But, as much as we’ve had our fun with Tony Danza, we have to admit that he really poured his heart into teaching these kids, and took the responsibility severely more personally than most teachers do (although, he’d probably get jaded too if he taught more than one class a day for more than one year).  He even volunteers to mentor a troubled teen delinquent who’s not even in Mr. Danza’s class.  Sometimes Danza takes the “he reminds me of me” thing a little too far (especially when he compares losing his father when he was thirty years-old to a kid being in jail while his mom died) , but he’s certainly willing to sacrifice his time and energy to help these kids.  He’s the boss.  So good for you Tony, just PLEASE stop rapping.

And apparently this was the season finale, which means the first season ended on a dark, pessimistic, almost The Wire-like note, as Tony struggles to get through to his students and questions his ability to do so, while his reclamation project may be heading to prison.  It certainly wasn’t the uplifting conclusion we expected.  Let’s hope that means it’s merely a cliffhanger to be revisited in season two (although the fact that they burned off two episodes in one night is not an encouraging).  But until we get that resolution, if we even do at all,  we’ll be worrying about the fate of Tony Danza, boxer, taxi driver, boss, tapper, teacher.  At least we know he’ll be breathing okay.

Filed under Century 21 Reality, Count Bleh, Literarally, Who's the Boss?