Boy, it’s really getting rough out there in Nicaragua, ain’t it?  Gone are the halcyon days of last week when everyone basically agreed to vote out Alina.  No, there are fractures in this group, and as Jeff astutely notes after Tribal Council, they are clearly a “Libertad” divided.

After Marty called out Jane at Tribal Council last week (well, not so much called her out as pointed out how much of a threat she is), it was clear that the battle lines were drawn, with Jane now obsessed with not just beating Marty, but humiliating him (for example, she calls him “Farty” now.  GOTCHA, MARTY!).  Jane, relax.

Yikes.  But, at the end of the day, Marty went home and Jane didn’t, so I guess she did outsmart him.  And the very least she outlasted him.

So let’s just get right down to it.  What we all knew was coming at some point.  We proudly, but also sadly, present the Final Faces of Marty.  They’re a doozy: 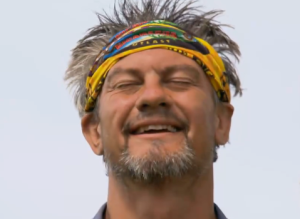 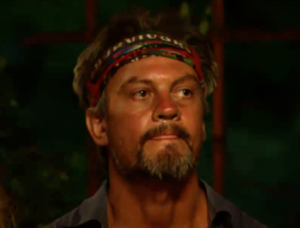 Goodbye, Marty.  You and your Frankenstein hair will be missed (but mostly just your hair).

Marty desperately needed to win the Immunity Challenge, but, alas, he was no match for Brenda, who was downright schoolgirl giddy with her victory. 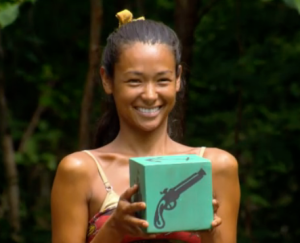 But careful, Brenda.  Got to be a team player.

Now for some real analysis: last week we blasted Benry for turning on Alina and referring to her as a “dirt squirrel,” thereby effectively ending our support of the Girls Gone Wild cameraman.  However, while we don’t care for Benry personally, we’ll begrudgingly have to root for him since he seems to be in league with our boy Fabio.  Even more, after this week, we’re going to make a prediction and say that Benry and Fabio, whose stock has only been rising in our eyes, are going to make it to the final three.  We’ve already mentioned the Benry is one of the strongest players out there, certainly physically, and possibly mentally, and Fabio is starting to show us that he might not be as dumb as he seems (and he seems really dumb).  But beyond their physical and mental acumen, Benry and Fabio are flying under the radar, positioning themselves perfectly to go far without making too many enemies.

The last few weeks have been dominated by the Jane-Marty battle, with Brenda and Sash thinking they have full control while those two elders battled it out.  But since Brenda and Sash ended up as the swing votes in the last Tribal Council, we’re wondering if they might not be the ones in charge, but instead the two odd men out.  Being a swing vote can be a boon, because it means you get to dictate the game.  But that deciding vote might only last one Tribal Council, and could be an indicator that you’re not a core member of a powerful alliance.  Now, Brenda and Sash do have a solid third in NaOnka, whom they are definitely planning to take to the final three.  But how long until Chase, Purple Kelly, Holly and Jane realize there’s only room for three on that ship?  Meanwhile, Benry and Fabio can align with invalid Dan, who will be just as undeserving as NaOnka to make the final three, but will have far fewer enemies.  No one will give him the million, but he’ll be far less of a pain to keep at camp, and the jury won’t criticize whomever brings him to the final for carrying along a terrible, mean, selfish, childish person.  So, Benry, Fabio and maybe Dan in the final three.  That’s our prediction and we’re sticking to it (until next week).

And now, finally, our A-B-C of the week.  Could have been “Always Be Concentrating” for the Immunity Challenge, or “Always Be Crying” for Purple Kelly, among others (and, really, Kelly, did you expect that turning on waterworks was going to inspire one of the men to give up their reward?  Not bloody likely)), but we’ve decided to award this week’s A-B-C phrase to:

Because, as we said, it was mean out there.  NaOnka was her usual terrible self, culminating in a Tribal Council breakdown littered with obscenities, so tawdry it made Prost blush.  The girl does not have a nice thing to say, and she doesn’t know how to keep her mouth shut, which is a dangerous cocktail.

Yikes.  But malice didn’t stop with NaOnka, as Jane spat out one of the meanest, coldest, most vitriolic and unnecessarily personal parting words we’ve ever heard from someone as they cast their vote, telling Marty “You are a disgrace to every man who calls himself a father.  If I had a child or a grandchild there is no way in heck I would allow my child or my grandchild to come play with your children…and you’re a disgraceful father.”  DAMN, GINA.

Meanwhile, we’re pretty sure Jane has morphed into Smeagol.

Guys!  If you don’t have something nice to say then don’t say anything at all!