Maybe we were spoiled by the last season of All-Stars. Not just that it offered unmatched drama, familiar characters, surprise twists, but also that those guys knew how to play the game. Granted, that’s a benefit of playing the game for the second, and in some cases, third time, and there were still plenty of dummies out there (Tyson and JT committing two of the all-time unforgivable blunders in Survivor history), but the people running the game, at the top of the food chain – Russell, Parvati, Boston Rob, even Rupert – did so with intelligence and cunning. It truly was a game managed by all-stars. Heck, even Sandra knew how to play game.  And she also knew to save the vindictive vandalism for the last day, and when Russell steals other player’s shoes he doesn’t tearfully confess an hour later (lessons to be learned, NaOnka, Holly). But over here on Nicaragua, even though there are clearly leaders on each tribe, they’re not nearly as crafty and clever as they think they are. And, now, you can’t even blame it on youth, because Marty, self-proclaimed master of the game, is racking up the mistakes along with the kids. Who among the tribes is truly grasping this game, making smart, logical moves, not just tricky, creative ones? Right now, it’s hard to say.

Espada, safe this week (thanks to Benry), didn’t have much of a chance to shoot itself in the foot with another questionable elimination.  And La Flor, to their credit, in voting out Jill, made a reasonable decision.  She was in the minority older group, and could be both a physical and strategic threat.  But it was how they got to that decision that was so interesting, so infuriating.  Faced with having to flush our Marty’s immunity idol, after he bravely (we say foolhardily, even if the gamble worked), neglected to play it last week, Sash and Brenda came up with what I’m sure they believe is a genius plan: ask Marty for his idol in exchange for his safety.  Not a bad idea, very little risk, right?  The worst outcome is that he says no and he goes home next week.  The best is that they get an immunity idol and Marty could STILL go home that night.  But, on the other hand, is it so wise to make matters more complicated?  Once again, especially when you have the numbers, it might be better to keep it simple (stupids).  You get the idol, but that could be opening Pandora’s box.  And then Sash sweetens the deal by agreeing to give Marty the idol back if they return to tribal council.  WHAT?  Sash, no, you’re not.  And if you do, you’re going to have problems with your own alliance.  And if you don’t, guess what, there’s a merge about to happen, and if Marty manages to last a few more weeks you might now have someone on the jury with a vendetta.  You can be a dick and lie to people outright early in the game, but as it gets closer to voir dire you can’t be so cavalier.  So, while the idol ended up in Sash’s pocket, it’s a powerful, dangerous totem.

But the real blockhead this week was Marty.  Oh, Marty.  How the mighty have fallen.  Why, buddy, why?  Even if you’re not really a chess grand master you sure acted like you were the grand master of Survivor.  So, how did you survey the chess board, look at all the moves, simulate every permutation and decide to give up your idol, putting your faith in the alliance that made no secret of wanting you eliminated.  Let’s look at the options: a) keep the idol, play it and live to fight another day, b) keep the idol, gamble again and don’t use it, possibly survive another week, c) hand over the idol and maybe make it through this tribal council.  Of course, Marty chooses option C, because every time anyone on Survivor has ever handed over an immunity idol it’s worked out perfectly.  Oh wait, WRONG.  Even Jane knew that.

And Marty had other options.  He could have tried to convince his Padawan, Fabio to flop and vote for Jane, which could have given them the win, since the rainbow alliance was planning to split the vote between Marty and Jill.  Or, as a chess master he could have done something more daring, like the Spasky Bishop Block, by quietly passing the idol to Jill.  He would go home, but Jill would continue on with the idol.  Or she plays the idol and they both stay.  High risk yes, but also high reward, versus handing over the idol to Sash which is huge risk, little reward.  Or Marty could have thrown a hail mary and offered Sash a fake idol just before tribal council.  Something, ANYTHING else.

That all being said, Marty is still in the game and it looks like the merge is on next week, so maybe he’ll make us look stupid.  Unlikely, but possible.

So Marty saved himself and Jill went home.  Jill played hard, but as Marty’s obedient right hand woman, her days were numbered.  Had she played more like an ER doctor than ER nurse, maybe things would have been different (no offense to nurses, who are really the backbone of any good hospital.  God bless).  And while, like Yve and Kelly B, Jill was not known for her arsenal of facial contortions, we are proud to bring you the Final Faces of Jill: 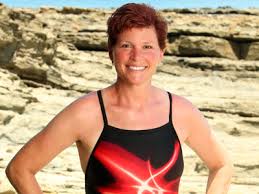 – Purple Kelly is apparently a person on this show.  She might have spoken for the first time all season.  Enlighten us, Kelly:

Actually, she lamented losing the reward challenge, and missing out on the chance to “milk their own milk,” or something like that.  Keep talking!  Remove all doubt!

– And speaking of that reward and milking your own milk, NaOnka got to touch “cow nipples” and procure freshly drawn milk for the first time:

– But, to NaOnka’s credit, she also made her first sensible, rational, human comment of the whole show, observing that Alina is playing the game hard.  We are falling for Alina, and you can see it in her eye that she clearly gets this game.  But apparently that’s clear to NaOnka too.

– It’s beyond us why La Flor chose Fabio to be the pseudo-goalie in the jump ball reward challenge, which was the most critical role, and the one that required the most intelligence.  Instead, Fabio was easily outsmarted by Alina and NaOnka, and pretty much embarrassed, not once but twice, by Benry.

– And about Benry, he’s been a stud in challenges.  Must be because he’s a Jedi.  We still have a hard time rooting for him because he’s a cameraman for Girls Gone Wild and thus we assume he’s kind of a douche, but if he and Alina continue to make such a swell pair in challenges we just might come around.

Which brings us to our A-B-C of the week.  Nothing too fancy this time, just simply:

That goes for everyone, but especially for Marty and Sash.  Marty, you gave up your immunity, and more importantly you put yourself at the mercy of the younger members of La Flor.  We’ll see how that works out.  And Sash, you got what you wanted, but as Probst so expertly pointed out, that idol burning a hole in your pocket could easily cause some dissension within the Rainbow Squadron.  Also, Alina, watch yourself, girl.  You’re adorable and you’re strong, don’t give NaOnka (or anyone else) more reason to plot against you.

Filed under Analysis, Krebstar, Saved by the Bell, Tribal Council