For a while there it looked as if, for the fourth week straight, we’d lose one of the older males from Survivor: Nicaragua.  All signs pointed to Marty joining the parade out into the graveyard, following in succession former Espada tribemates Jimmy Johnson, Jimmy T and Tyrone.  Traded two episodes ago to the La Flor tribe, Marty had only his Immunity Idol (and Fabio, for some reason) to protect him.  And when, at Tribal Council, he elected not to use it, he had nothing to left.  He was a goner.

Instead, curiously, Brenda, Sash and the rest of the La Flor rainbow squadron decided to save Marty, voting out (One Leg) Kelly B instead.  The plan, they stated was to vote 3 for Kelly B and 3 for Marty; if Marty plays his idol Kelly goes home, if he foolishly holds onto the idol then he goes home, a victim of his own hubris.  When the votes were cast following an especially contentious Q&A and Marty STILL didn’t use the idol, his departure seemed like a sure thing.  And, yet, after the revote Kelly was eliminated in a landslide.  Why?  That wasn’t the plan (although, since everyone knew to vote for Kelly B the second time around, I guess that was the plan).

The most likely answer is that tribe masterminds Brenda and Sash think Marty has more value than Kelly B, that they can use him and his immunity idol.  Keep your friends close and your enemies closer.  But we think that’s stupid.  Once again, the players this season are making the game harder and more complicated than it needs to be.  KEEP IT SIMPLE STUPIDS.  Sure, maybe Marty now owes them a favor.  But he has Fabio in his back pocket, and he’s playing the game harder than anyone else out there (and being pretty conspicuous about it).   To us, the risk far outweighs the reward.  But, hey, Brenda and Sash have played the game two weeks longer than us and have really won nothing yet besides lamb and chicken kabobs, so those guys know best.  But here’s the thing with One Leg Kelly.  Why were they so afraid of her?  They kept saying she’s too much of a risk to take to the end, because everyone would vote for her.  But EVERYONE HATED HER for that.  So then how was she a threat?  Stupid.

And then over Jimmy Johnson Memorial Camp, the former La Flor tribe members continued to pick off the remaining older Espada players.  But instead of voting out Dan (or Holly, who is still crazy, btw), who can’t walk, talked about quitting, and owns a Ferrari, they said goodbye to Yve, because, we guess, she can walk and thus was an overwhelming threat.  Yve tried hard to plead her case, but she was really the victim of numbers and had no shot, especially after Holly flopped over to the young alliance, apparently because everyone there reminds her of her kids or her swim team or a waitress that once served her apple pie a la mode.  Dan poses no threat to the tribe at the moment, but they’re going to be screwed if in an upcoming challenge he has do anything other than stand in one place, and if he makes it to the merge he’s likely to hop back on board with Marty (assuming Marty makes it too, which he probably will as it seems like Brenda and Sash’s genius master plan is to keep their biggest strategic threat around as long as possible).  So, kids, have fun carrying Dan (literally), and good luck with Holly as your den mother (tip: make sure you hide your shoes!). 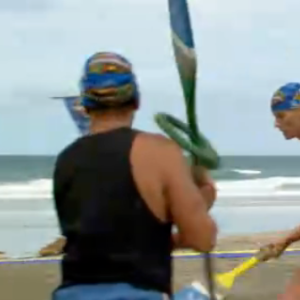 Unfortunately, neither Yve or Kelly B were really known for their catalog of facial expressions, so no Final Faces this week (although, had Marty gone home it would have been an embarrassment of finger-in-electrical-socket-hair riches).  So, instead, ring toss!

We thought we requested no more carnival games, but apparently our blog posts don’t have the power to go back in time and persuade the Survivor challenge producers to alter their designs.  But imagine if they did have that power???  That would be awesome.

As for this week’s A-B-C phrase, we were tempted to select “Always Be a Chess Master,” as Marty easily convinced Fabio of his (fictional) status as chess Grand Wizard (although, Marty could have said he was a KKK Grand Master and Fabio would probably believe him).  But since Marty was spinning a yarn and is probably only really good at chess, and Fabio is an easy mark, and Marty’s lie isn’t what kept him in the game, that phrase didn’t make the final cut.  Instead, this week’s idiom is our first A-B-C-D:

Because for Daniel, being essentially crippled is keeping him in this game.  On the other hand, Kelly B, who has one leg, was, apparently, not handicapped enough.  In the end, it probably would have been better if she played the game without her prosthetic appendage.  Next time, Kelly, have less legs!  WORKING LEGS SINK SHIPS!

Our guess for tonight’s challenge: Guess The Number of Jelly Beans.