‘Survivor Nicaragua’ Unless You’re Bill Parcells, How Could You Think You’re a Better Coach Than Jimmy Johnson? AKA The Final Faces of Jimmy Johnson; Plus: Player by Player Odds!

Well, Survivor: Nicaragua just became a little tougher to watch every week.  While we were initially skeptical of the inclusion of former NFL head coach Jimmy Johnson’s in the cast, we were quickly won over by his charm and gung-ho attitude.  We still think it was a questionable decision by the producers, big picture-wise, but it enabled us to enjoy his positivity, humor and variety of faces every week.  That is, until the Espada tribe made the curious (aka egregious, outrageous) decision to cut Coach Johnson, engineered by Jimmy T and Marty’s testosterone-driven need to prove that they can be a better leader (than a Super Bowl winning NFL head coach).  Why Jimmy T felt threatened by Jimmy Johnson, or why he desired to usurp the  leadership role when it makes more sense to let Jimmy J maintain the mantle and thus the pressure, is beyond us.  And why Marty feels compelled to “accelerate” the game is even more baffling.  Now they’ve put themselves both in the cross-hairs, while they could have let the bullseye rest on Coach Johnson.  It was way to early for a power grab, and completely unnecessary, and they’ll likely realize this sooner rather than later.  At least vote out the dude who can’t even walk (Danny).

But, for now, the damage is done and Jimmy J is gone.  In his honor, our (perhaps) final Faces of Jimmy Johnson: 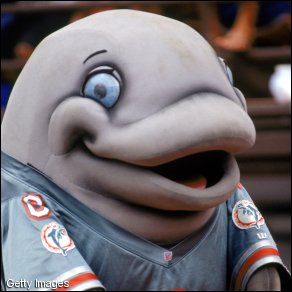 With Jimmy J joining homophobe Shannon and chatterbox Wendy, there are now 17 Survivors left.  Let’s take a look at ’em, one by one style*:

Alina: We like you.  You seem to get the game.  But, unfortunately, you also seem to be in the minority in your tribe (that’s what you get when you align with a raging d-bag like Shannon.  Although, it wasn’t a bad strategy to try to ride a strong male a la Parvati and every dude she ever played with).   Unless they mix of the tribes soon, she could be on the outs.  Odds of winning: 30-1

Benry: We’re not sure we believe his “hot air balloon” story, but he came out of nowhere to dominate the bag-toss challenge last week, so he looks like he could be a threat.  Not overly intimidating, but perhaps a good mix of strength and smarts.  May have a crush on Jud.  Odds: 8-1

Brenda: Has lug nut Chase under her spell.  Found the Medal of Honor…er, Medallion of Power.  As you can see, was a Miami Dolphins Cheerleader.  Could use her physical prowess and her feminine wares to go all the way to the end.  Odds: 5-1

Chase: Physical ability could take him far, but doesn’t seem like he has the savvy or the decisiveness to win it all.   25-1.

Dan: Literally may be missing his knees.  Or might have knees on top of knees.  Either way, they don’t work, and the only way he’ll make it far in this game is by paying off the other competitors (although, if he has enough money to bribe his way though, he might not need the million).  Odds: 1-10

Holly: Totally nuts.  Breathlessly forged an alliance with Wendy (good choice!) within seconds of arriving at camp.  Immediately regretted that decision.  Filled Dan’s leather shoes with sand and then submerged them in the ocean, for reasons that remain unclear.  Admitted she knew she was on the chopping block last week when she wasn’t even in the conversation.  Clueless.  Bonkers.  Will not last long.  Unless her vital experience as a high school swim coach finally pays off. 300-1.

Jane: Learned how to start a fire before coming to Nicaragua (finally, someone actually prepares for the game) and made herself immediately valuable to the tribe.  One of the stronger woman on Espada, and seems smarter than she lets on, she could make a run.  However, if she makes it to the merge she’ll likely intimidate the youngsters and will have a hard time winning over the mean girls.  Odds: 15-1

Jill: Probably the most capable female on the Espada tribe, and has a claim to 1/2 of the Immunity Idol she found with Marty.  But while she might have the skills, physically and mentally, it remains to be seen if she has the guile and the cunning.  So far, as Jeff Probst pointed out, she’s letting Marty dictate her game. Odds: 20-1

Jimmy T: He admitted that he thinks very highly of himself (he might be the only one), and he thinks managing a fishing boat is tantamount to coaching a Super Bowl winning football team.  He’s like one of our favorite past contestants, Coach the Dragon Slayer, but with self-awareness.  Which makes him less enjoyable.  And probably even more so to his teammates.  He got his wish and Jimmy Johnson is gone, but if and when Jimmy T tries to step and assume leadership he’ll put his head right in the guillotine.  Odds: 40-1

Jud: Nicknamed “Fabio” by the La Flor tribe because, apparently, they’re too young to actually know who Fabio is, because besides the long blond hair, Jud has nothing in common with the I Can’t Believe It’s Not Butter spokeshimbo.  Clearly, Jud is an airhead, but he’s grown on us.  He’s physically fit, probably won’t ruffle any feathers (save for NaOnka), won’t make a power grab, and could be fun to have around, so he’s got a chance to go far.  If he doesn’t injure himself first.  Although, the jury might be hard pressed to hand the million to Jud when they know he’ll just blow it all on Funions.  Odds: 15 -1

Kelly B: AKA One-Leg Kelly.  She’s a fierce competitor who won’t let her physical handicap hold her back.  Unfortunately, she’ll get voted out soon because no one wants to go up against her in front of a jury, since everyone assumes she’ll get the pity vote.  Except that everyone feels this way and thus hates her, so these being terrible, narcissistic, petty people, they’d probably give the money to the other person just to spite Kelly. But she won’t make it that far.  Odds: 50-1

Kelly S: AKA “Purple Kelly.”  Might be an even dumber nickname than “Fabio.”  The other Kelly has one leg and they deem this one “Purple Kelly?”  Silly.  Oh well.  She’s good-looking, fit and seems like she could be a bitch, so she might be one to watch out for.  Odds 12-1

Marty: By directing the ouster of Jimmy J, he’s asserted his leadership of  the Espada tribe, he’s the alpha old dog.  He thinks he’s the only one playing the game, or at least he’s playing it better than everyone else.  But it’s more than likely that his rush to get the game moving will result in his own exit.  If he steps back and lets the pieces fall into place then he has a shot.  But if he keeps forcing his will and trying to make the game happen then his torch will be snuffed out (by Prost!).  Odds: 20-1 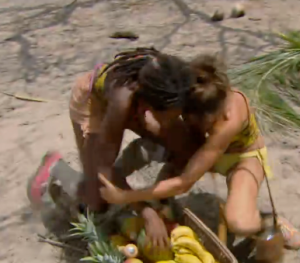 NaOnka: Just the worst human being.  A terrible, terrible person in a game known for terrible terrible people.  But despite being despicable she’ll probably be kept around because she’s 1) a physical force (just ask One-Leg Kelly), and 2) no one will give her the million because she’s a nasty witch, so she’s not a bad choice to take to the final two.  If anyone can tolerate her that long.  Odds: 45-1

Sash (not gay): Well, if Sash’s multi-cultural alliance plan works out, then he might be able to ride that rainbow to the end.  Of course, it might be a better idea to forge an alliance based on other criteria like strength, intelligence, trust, vulnerability instead of ethnicity and skin color.  Still, as the (not gay) least imposing young male he may not be seen as an immediate threat, and thus could use his famous charm with the ladies to go deep into the game.  15-1.

Shannon: You’d think a dude with the name Shannon would be more accepting of homosexuality.  Oh well.  He won’t get the million dollars, but at least he’s definitely having sex with scores of beautiful women (probably as I type this).  Odds: Nevermind

Tyrone: Would have been our pick to win it all before last week’s episode.  Heck, he was our pick to win it all up until halfway through the challenge, as he was sinking shots left and right, tongue hanging out MJ style, Coach Jimmy Johnson looking like a strategic genius behind him.  But then he started missing.  And missing more.  And refused to come out of the game until it was too late (although, we kind of understand the logic. Why bring in somebody completely fresh who would require a few tosses to adjust to the weight of the bags and the distance to the barrels.  Still, he was kind of a ball hog).  Tyrone is clearly the strongest physical competitor on the Espada tribe, so it would be a shock to see him voted off before a merge.  And he could probably handle himself against the younger meatheads.  But will his me-first attitude prevent him from building a strong alliance?  If he makes it to the end, it won’t be through strategic gameplay, but through straight up game. Odds: 17-2

Wendy: Sorry, we just wanted to see that jacket and hat combo again.  But she actually might think she’s still in the game.  Odds: ∞-1

Yve: Is it pronounced “Eve” or “Evie.”  Cause we’re not sure it’s ever been said.  Anyway, you’re 41?!  Coulda fooled us.  Yve is a bit of wildcard right now.  She could maybe go far.  Or maybe go home soon.  She had a little bit of a school girl crush on Jimmy Johnson, but he’s been sent packing, yet she seems to still be in good standing with Marty and the old gang.  The big challenge will come  merge time.  If she’s able to ingratiate herself with the younger competitors than she could make a run for it. Odds: 17-1.

And with that out of the way we’ve now come to our A-B-C phrase of the week, inspired by NaOnka’s brutal assault on One-Leg Kelly:

Because she’s maybe the worst person in a genre that breeds, encourages, and requires terrible people.  And it doesn’t look like she’ll ever change.

So NaOnka lives to fight another day.  And Coach Jimmy Johnson goes home to his wife.  Where’s the justice in that?

*We’re really not sure how odds work, so these predictions are outrageously unscientific. DO NOT bet money based on these numbers.

5 responses to “‘Survivor Nicaragua’ Unless You’re Bill Parcells, How Could You Think You’re a Better Coach Than Jimmy Johnson? AKA The Final Faces of Jimmy Johnson; Plus: Player by Player Odds!”