And that being the truly uncomfortable level of creepiness.  Take a look at Dan greeting Marty at Ponderosa:

Quadruple yikes!  Dan, that’s not even your son!  Matthew is going to be crushed when he sees this.  Loose Dan’s lips sink ships!

But while we’re on the subject of Dan, we have to admit that the guy toughed it out, managing to last 37 days.  And even though he survived because he posed absolutely no physical threat, we have to give him lots of credit for not quitting like some other, more capable competitors.  He may have showed very little aptitude for the game (i.e. being unsure about how many votes are needed for a majority when there are five people left), and evidently did nothing around camp besides rest his creaky knees, he did legitimately attempt every challenge (the ones he didn’t sit out, that is), and boy did he ever show up when it came time for his moment at the final Tribal Council.  Frothing at the mouth, he bitterly eviscerated Sash, spewing venom and castigating Sash’s fake smile and his icky wink.  Dan was almost as terrifying as Jane.  Future jury members take note, this is how you do it.

But lest you think Dan made it up on the spot, here’s him plotting his tirade in his journal (adorable!):

But enough about Dan!  Let’s talk about Fabio, who defied the odds by winning three straight Immunity Challenges when his head was firmly on the chopping block, thus sealing a victory over Chase and Sash to become the Sole Survivor.  It was truly an impressive display of physical and mental ability, as he came from behind to win a puzzle challenge to make it to the final four, and then proved his resiliency and focus by pulling out a critical and unlikely win in a heart-pounding, nerve-wracking balance challenge to secure his spot in the final three.  And while Fabio didn’t need to employ much strategy during the majority of the game, preferring to hang back, not make any enemies, go with the flow and then win out challenges when crunch time arrived, he made a million dollar decision to bring Chase and Sash with him to the final three.  With a female majority on the jury, Holly was Fabio’s biggest threat, so when the moment arrived to prove his strategic mettle he came through brilliantly, knowing that Sash had no shot and that his chances were better than even against Chase.

We think now is a good time to take a look back at our early season predictions, seeing how close we came with our analysis of those that became the final three:

Jud: Nicknamed “Fabio” by the La Flor tribe because, apparently, they’re too young to actually know who Fabio is, because besides the long blond hair, Jud has nothing in common with the I Can’t Believe It’s Not Butter spokeshimbo.  Clearly, Jud is an airhead, but he’s grown on us.  He’s physically fit, probably won’t ruffle any feathers (save for NaOnka), won’t make a power grab, and could be fun to have around, so he’s got a chance to go far.  If he doesn’t injure himself first.  Although, the jury might be hard pressed to hand the million to Jud when they know he’ll just blow it all on Funions.  Odds: 15 -1

Chase: Physical ability could take him far, but doesn’t seem like he has the savvy or the decisiveness to win it all.   25-1.

Sash (not gay): Well, if Sash’s multi-cultural alliance plan works out, then he might be able to ride that rainbow to the end.  Of course, it might be a better idea to forge an alliance based on other criteria like strength, intelligence, trust, vulnerability instead of ethnicity and skin color.  Still, as the (not gay) least imposing young male he may not be seen as an immediate threat, and thus could use his famous charm with the ladies to go deep into the game.  15-1.

All and all, we have to say we were prescient with those predictions.  The odds might have been off, but we were spot on with our analysis, and the strengths and weaknesses we mentioned were exactly what was discussed during the final Tribal Council (like Alina noting she preferred to give the million to a “man,” and not a “boy.”)

Once again, we have to state our admiration for Fabio.  Somewhere around the middle of this season we began to sense that he was smarter than he let on.  Not that he was acting dumb – we think he played the game completely honest – but that his goofiness obscures his intelligence.  We never thought he’d make it to the end, but we’re thrilled he did.  And he proved to be discerning, charming and quick-witted, easily laughing off Sash’s assertion that Fabio and Chase were his wingmen.  Fabio said, “NO!  You can be mine.”  And you can take notes, DUDE! 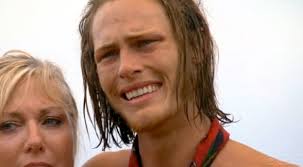 And for our final A-B-C of Survivor: Nicaragua we’re going to deviate from the normal format.  For this week, and for the win, it’s:

At 5-4, the vote was closer than it should have been, but Fabio rightfully takes home the million (and most shocking of all, he might have NaOnka to thank.  She gave him an alley-oop during the jury questioning, and it was her vote that put Fabio over the top.  We never thought we’d say this, but thanks, NaOnka!).  So Fabio, now and forever, always beat Chase.

Our only complaint?  We have no idea how Jeff got the votes all the way from Nicaragua to Hollywood.  Plane?  Boat?  Waterskis?  Locomotive?  Zipline?  C’mon!  Where’s the montage?!

Oh, and in case you were wondering, Purple Kelly still does not know how to use the marker.

That’s it, folks!  It’s been an absolute joy.  We’ll see you in February for Survivor: Redemption Island: Curse of the Purple Stone: The Probst Strikes Back: New Moon!  Until then: