“I know I lied to you and voted you out, but I have no boobs left so have a little mercy.” – Kim

It is somewhat fitting and poetic that in a game defined by boobs – both anatomical and intellectual – it was the least endowed woman who triumphed over her more busty peers (and, no, we’re not talking about Nina).  In the end, it’s not what you have here (pointing to our chest), but what you have here (pointing to our head).  And whatever Kim may not have or may have lost in her bosom, she certainly more than made for up with her brains (we could also note how she played the game with a lot of heart, but that would require also pointing to our chest, which would confuse the whole point.  She also played with a lot of guts, but if we’re going to point to anyone’s stomach, it’ll be Colton’s to giggle at his doughy appendix scar).

But before the end, there is the beginning of the end, with the Final Five Females returning to Big Mike’s All-Female Dormitory after euthanizing Tarzan.  The lack of food and water at this point seems to be exacting a toll, as Alicia is pretty much delusional, operating under the completely fictional belief that she somehow is and has been a power player in this game, that along with Kim she’s been running the show.  Even Xtina has been playing a better game than Alicia, and Xtina doesn’t even know she’s in a game.  Meanwhile, Sabrina is shocked – SHOCKED – to hear that Kim is considering voting off Chelsea.  Um, have you not noticed the last seven Tribal Councils where someone was blindsided at Kim’s direction?  Have you not realized that Kim has played this game with a ruthlessness that belies her sweet baby blues but fits perfectly with her jagged shoulders (not a criticism, we have the same bone structure)?  Obviously Sabrina has not noticed this, but it’s likely her obliviousness that has helped her stay in the game.  It certainly wasn’t her physical prowess (and her later proclamation that she was purposely tanking it in challenges?  We’re not buying it).

But Chelsea is in a precarious situation heading into the first of the night’s Immunity Challenges, needing a win to remove any doubt about her path to the Final Four.  The challenge is perhaps the most brutal of the season, a Rube Goldberg-Votron-Mouse Trap-Obstacle Course that combines elements from earlier challenges into one Super Challenge.  And, in the end, it’s Kim, flashing shades of Boston Rob, scaling the platform, releasing the flag and seizing the day.   Congrats, Kim, you’re going to win a million dollars (not that she would have been in danger even if she lost.  It seems that everyone gave up notions of voting Kim out weeks ago, a bold idea that went out with the final flicker of Troyzan’s flame).

We ended our last recap wondering if Kim would sacrifice her friendship with Chelsea for a better chance at winning the million.  And now that she’s secured Immunity, yet again, the choice is hers.  And this, we believed (and still do) would be her defining move in the game.  Not the most critical move, not the big power play that paved her way to the end, but the decision that will most influence her legacy.  Kim has been dominant ever since the first tribal shake-up, and not only has she been dominant, she’s been visibly dominant.  She hasn’t been a snake in the grass, she’s been a gazelle in vibrant tri-color, 64 bit, 1080i HD projected on a 70-inch screen.  From the moment she engineered Jay’s elimination, she’s put her long neck on the chopping block, and, yet, it never came close to the cold steel.  Here she still is, in the Final Four with Immunity, a clear path to the end.  And it probably doesn’t matter who she brings to the final.  She could easily bring Xtina and Alicia, two lesser, unlikable players, and win in a clean sweep.  But if she takes Chelsea and Sabrina, the two people with whom she has had the longest, most intimate alliance, it would be the cherry on top her singularly dominant performance.  So, while choosing Chelsea over Alicia probably wouldn’t change whether or not Kim wins the million, we believe it does impact the meaning of a Kim victory.  To make a decision to sit there with two strong players, and two strong allies, well that says something about Kim, and we think that would say something about her place in the Survivor pantheon.

So what does she decide?  Well, at this point, with all those words we’ve just written, it’s pretty clear that she sticks to her (now ripped) guns and votes out Alicia (Xtina, of course, is bum puzzled and bewildered for the 42nd consecutive Tribal Council).  For the final time, Kim has chosen her side.  Congrats Kim, you’re going to win a million dollars, and you’ve done it admirably.

But before we can get to the final Tribal Council (wait, what?  They need still need to vote out Xtina?), there’s the matter of a little Survivor tradition: the March through the Fallen Mikes.  The Final Four trek through the island hills reminiscing about their past teammates and competitors, Big Mike, Lil’ Mike, Little Mike, Irish Mike, Fat Mike, Mike Mike, Red Mike, ‘Ttle Mike, Jew Mike, and Mike I.  It was a somber walk, but the saddest moment arrived at the very end.

And before they can get to the matter of voting out Xtina, there’s the matter of Kim having to win another Immunity.  This time, the Survivors need to carefully maneuver wood pots (no doubt made by the eliminated players at Ponderosa arts & crafts) through a winding wire frame resting on a spring.  Basically this:

And [SPOILER!] Kim wins!  And now it’s time for Xtina to make her big power play.  She’s been laying in the weeds this whole time, just waiting for the moment to strike.  A black mamba, biding her time:

You’re about to get voted out, one Tribal Council shy of the final and your big defense is “Alrighty?”   Xtina, are you even there?  My doormat called, it asked that you stop making it look bad.

To be fair through, we think Xtina is under the impression that she’s on The Real World: Samoa, and since she’s merely still on the show she’s tied with everyone else for the lead.  If they gave out awards for barely existing, she’d get a participation ribbon.

But, unfortunately for Xtina, it’s not The Real World, and you actually need some aptitude and personality for this game, and thus, with something resembling a fraction of a whimper, her end finally comes.  Although, in all fairity (a phrase Big Mike would coin in the later reunion), she made it about 95% farther in the game than anyone thought she would (or should).  The ironic twist: it was Colton, who was more cruel to Xtina than anyone else, who cemented Xtina’s place in the game by succumbing to appendicitis and giving her a stay of execution (and proving that there is a God).

To celebrate Xtina’s exit: liquor!  Watch out, ladies, as soon as Kat gets a whiff of that she’ll be barreling in on all fours.

It’s finally off to the last Tribal Council where Sabrina makes the case that she deserves to win the million for her performance in the game by asking the jury to step outside the game and give her the million because she’s a recently laid-off inner-city school teacher.  Sabs, listen, we like you, and we appreciate and sympathize with your plight (we were laid off once, and our neighborhood in Brooklyn was pretty dangerous in the 80s), but don’t.  Just don’t.  You demonstrated neither strategic acumen nor physical superiority, and while your social game was commendable, it was based on letting Kim make all the decisions and enduring the totality of the consequences.  You were nice, and while we salute you for that, if millions of dollars were given out for being nice, my mom wouldn’t have so many mortgages.

Chelsea, on the other hand, offers an apology for being a “hard-ass,” and not being as personable as Kim.  This should have been presented from the perspective that Kim got close to all these people on the jury and then stabbed them in the back, thus her transgressions were greater; instead, Chelsea just suggests she played the same game as Kim, just with much less tact, skill and grace.  Not sure we’ll be asking Chelsea to represent us in any upcoming litigations (not that we’re expecting any, why do you ask?).

And this, actually, was the most surprising revelation for us in the finale, that Chelsea was not that well-liked.  Certainly, she was a fan favorite in our household (for obvious reasons), but we assumed she was nearly as adored by her fellow Survivors, what with her Southern charm, pretty face, and other assets.  But as the juror parade continued, it became clear that this was not the case.  Which made Kim’s decision to bring Chelsea even smarter (if less admirable).

On, the other hand, this guy is a fucking stud.

Kat somehow sobers up and offers a stirring, if mathematically inaccurate, reveal about her heart condition and a heartfelt plea to the jury to put aside pettiness and jealousy.  On the other hand, we guess it’s totally possible that was just Kat super-drunk.  Three drinks and she’s chicken winging and leap-frogging with her cousin, ten drinks and she’s shockingly eloquent.

Once the jury finishes their line of questioning and Jeff gets on a WaveRunner and completes his three-month trek back to NYC, the votes are read and the winner is crowned.  Congrats Always-a-Bridal-Shop-Owner-Never-a-Bride Kim, today you are the bride, and one million dollars is your groom. 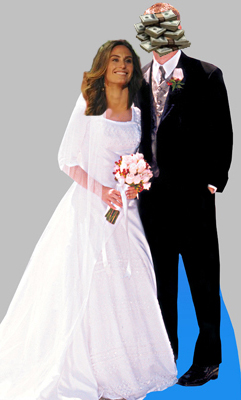 The question now is Kim’s place in the gallery of Survivor winners.  While she played the game against a bunch of boobs (again, literally and figuratively), there’s no denying that she played a nearly flawless game.  Yes, she probably showed her hand too early, and we are still baffled that no one other than Trozyan made a run to topple her, but you have to give her credit for running this game nearly from start to finish, especially when her dominance took center stage so early  This is why we put her performance up there with Boston Rob (circa Redemption Island) and Lt. Tom Westman as one of the all-time greats.  Indisputably, regardless of the quality of the competition, it was one of the cleanest, most complete victories in the show’s twenty-four cycles.  Were there any fireworks last night?  Certainly not.  But we’re certainly satisfied with the outcome.  When someone plays that well that long they deserve to win, anything else would be a disappointment.

Also making Kim’s win satisfying: we called it from day one.

Which brings us to our final A-B-C of Survivor: ONE WORLD!, which comes to us courtesy of Xtina:

Because in the reunion Xtina showed that she’s probably just as bad at her job as she was at Survivor, noting that in sales she gets paid to be rejected.  No, Xtina, you get paid to make money.  Something tells us she isn’t winning the steak knives this year.

And that about wraps it up for Survivor: ONE WORLD!  We’ll see you in the fall for Survivor: Revenge of the Fallen.  Until then, in the mortal words of Troyzan, uno, dos, adios!