Alright, guys, let’s try to do this before the entirety of the Matisyahu Tribe is completely decimated and all we have left is the memory of Angie’s boobs. We’ve been dark for the last few weeks, but all we missed discussing was the systematic destruction of Russell Swan and the Gang. But after tonight, when Denise and Malcolm will likely be forced into tribe cannibalism for survival and admission to the merge, things should get more interesting. So throw away your binders full of women and let’s get to it.

(Note: we want to thank Nate Silver from the Electoral Blog FiveThirtyEight for providing absolutely no scientific of statistical input for these predictions.)

Abi-Maria: Well, if the idea of the game was to out-crazy, out-make no sense, out-constantly touch your hair, then Abi-Maria would have this game completely locked up. Unfortunately for her, that is not how the game is played, and what she considers strategic, clever gameplay is actually loose cannon paranoia that verges on schizophrenia. Perhaps the reason that she keeps pulling at her tresses is that she’s trying to keep the voices out (or in). Certainly, considering the rapid disintegration of her alliance with RC Cola, her loyalty and judgment are suspect, and we think she’s ripe for a  blind-side down the road. Odds of Winning: 45-1

END_OF_DOCUMENT_TOKEN_TO_BE_REPLACED

Be Careful What You Wish For: Boston Rob and Russell to Return for ‘Survivor: Redemption Island’; AKA Our Brain Just Exploded 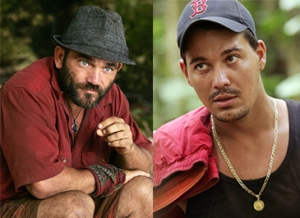 When Survivor: Nicaragua began we were unsure if it would be able to capture our attention, lacking the unbelievable drama of the previous season’s Heroes vs. Villains edition, and, more specifically, devoid of the Boston Rob-Russell Hantz showdown that defined that season and should have, at the very least, earned it an Emmy nomination.  To our surprise, we were hooked on Nicaragua even though it didn’t offer those familiar personalities (or even offer any truly engaging new personalities, save for Jimmy Johnson (who, to be fair, was not really a new personality)).  But when we talk about Nicaragua, then and now, it succeeded despite having anything that approximated the Rob-Russell Clash of the Titans.  And when we talk about anything approximating the Rob-Russell Clash of the Titans, what we really mean is specifically another Rob and Russell battle.

Well, hold onto your buffs, because it’s happening again.

END_OF_DOCUMENT_TOKEN_TO_BE_REPLACED

Filed under Analysis, Be careful what you wish for, Bob Loblaw, Century 21 Reality, Discos and Dragons, Freak Out Control, Jumped the Shark, Mancrush, Tribal Council