‘Survivor: One World’ – Karma Right Back At Him 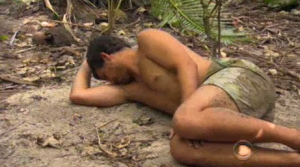 For the last few seasons we’ve become increasingly irritated by the presence of God, or, rather, some players’ insistence that he (or she!) has some influence on the game of Survivor, from Matt justifying his repeated exile to Redemption Island as part of Jesus’s plan to Brandon Hantz invoking the will of the Lord in his quest to purge Mikayla from the game (and maybe the Earth) because of her fictional harlot tendencies.  For one season we can deal with these bible thumpers, but as it became a consistent aspect of the game, it became grating, obnoxious even.  Sure, God may love Survivor, but as a true fan he would never get involved.   When it comes to Survivor, God is agnostic, and if he had a dog in the fight, it wouldn’t be someone from the God Squad, it would be a rough and tumble champion, like Sophie or Lt. Tom Westman.  But even if God had a rooting interest, we were sure that he (or she!) had no impact on the game, just like he has nothing to do with Tim Tebow (unless sending him to the Jets is God’s idea of a holy hilarious joke).  However, after this week’s Survivor: One World! we’ve changed our mind.  Because if that wasn’t divine intervention, if that wasn’t an instance of God reigning down vengeance from above, we don’t know what is.

As the Manano-shot Tribe returns to Tribal Council after “blindsiding” Monica, Colton and Alicia pick up where they left off.  That is to say, they are The Worst.  Immediately, they start picking on X-tina, because she’s next on the chopping block, with Colton being his usual entitled, despicable, repugnant self.  Man, I’m sick of all these gay bullies.  Something needs to be done.

Over at Big Mike’s Co-Ed Naked Dorm, Kat wakes up from a terrible dream.

And she stirs just in time for the team to receive their Tree Mail tease about the next Reward Challenge, which is purported to be some kind of backyard game (“Taking photos of models?” wonders Troyzan, “Being a model?” wonders Jay, “Burning ants with a magnifying glass?” wonders Kat, “Presidential Fitness Test?” wonders Sabrina, “Co-ed Naked Lacrosse?” wonders Big Mike, “Spin the Bottle?” wonders Troyzan (that one is for real)).  And when they arrive they learn it’s the classic backyard pastime, Bounce a Coconut Off a Trampoline into a Target (btw, RIP Joba Chamberlain’s ankle).   Next week we can only assume they’ll be playing a rousing game of “Sweep the Patio or Else No TV After Dinner.”

But this challenge does allow us to learn some secrets about the competitors.  For example, Kim was once QB for the 49ers (or at least her arm is better than Tebow’s.  BOOM.  That’s twice, Timmy) and Big Mike kinda throws like a girl.  Also, not only was Tarzan raised by gorillas, he is one.

What was not news to us is that Jeff Probst calls ’em like he sees ’em.  Oh, and that he’s awesome.

And, despite a momentary shadow of a doubt, Big Mike’s Co-ed Naked Coconut Toss Team wins!  And as their reward they get a trip the local ice cream parlor, which was pretty much the weirdest product placement we’ve ever seen on Survivor.  Was that just an ad for ice cream?  Where were the close-ups of logos and brand names?  It’s almost as if this reward wasn’t sponsored by some major company that contractually required Survivor to include completely extraneous, distracting product shots.  Also, where was the sneak preview of a shitty Jack Black movie?  All very confusing.   But at least the outing revealed another secret: Kat is a famous internet star!

And right now you’re saying to yourself “It’s been a while since Colton was The Worst.”  Don’t worry:

But, Alicia, refusing to let her wildly ill-fitting top speak for her, makes a run of her own at The Worst, trying in vain to make it a competition (and NOT giving X-tina an Oscar for her performance):

But it really wasn’t fair; Colton was under the weather, so he wasn’t up to his usual Worstness, complaining of a headache, dehydration, and intense stomach pain.  And we have to give credit to Tarzan, who tells Colton that it’s probably a tummy boo-boo, and then explains to us that Colton will probably die before nightfall.  Way to play it close to the vest, Tarzan!  Meanwhile, Leif is far too preoccupied getting ready for the big soap box derby.

But the pain persists and Probst calls in the medic (unfortunately, despite Colton’s request, there was no white doctor available), who immediately recognizes the severity of Colton’s condition:

Quickly, they diagnose Colton with likely appendicitis (which was one of Tarzan’s possible diagnoses, among others).  And here, even in the midst of a life-threatening malady, Colton continues to be The Worst.  And, really, that’s the work of a true The Worst.  Not even an engorged appendix can stop Colton from being a selfish, inconsiderate prick, as he refuses to give up his Immunity Idol, choosing instead to keep it as  a souvenir (although, we’d rather he keep it than give it to Alicia and provide her with a lifeline in this game.  Upon being spurned Alicia immediately threw a hissy fit, once again an example of someone in this game committed to being The Worst, even in the middle of a medical emergency).  And with the threat to his health too serious to leave untreated, Colton’s reign of green polo’d terror comes to an end.   Jonas assesses the situation and says it best:

And normally we don’t wish ill-will upon anyone in this game.  But Colton was an exception.  Even worse than Redemption Island‘s NaOnka, and she assaulted a girl with one leg.  Colton was rude, vindictive, self-absorbed, petty, cruel and just plain disgusting, and while we don’t necessarily take joy in his pain, we do relish that he’s now out of this game, and that we’re spared any more of his insipid, insulting, intolerant behavior.  Russell Hantz was a villain, but he didn’t get personal, and actually demonstrated discernible skill, whereas Colton is judgemental and narrow-minded, survived only because an idol fell into his lap (thanks, Sabrina!) and is a total jerk.  Our only regret is that Jeff didn’t get to extinguish his flame (and now, no doubt, Colton will carry on about how he was never voted out, how he would have won had he not suffered such misfortune, and now, inevitably, he’ll be given another chance in a future season.  We can only hope that when that happens he’s humiliated, embarrassed, and sent home swiftly).

REMEMBER COLTON, LOOSE THE WORSTS SINK SHIPS. SO DOES BEING AN INTOLERABLE ASSHOLE.

With Colton gone Tarzan takes on the task of getting things back to normal at camp.

Jonas, however, realizing that the alpha male is gone, decides to make a power play, pushing to vote off Alicia instead of X-tina.  Unfortunately, while his vast beta male influence is enough to convince a dude who’s four-feet tall, the plan is opposed by Tarzan, whose knees are literally falling apart (that Tarzan wasn’t the one who needed to be airlifted out is astounding).

But luckily for the Manano-skills Tribe, Colton actually, if inadvertently, turned out to be their savior, sacrificing himself to save the rest, as both tribes are sent to Tribal Council to learn that no one will be going home from either tribe and, instead, it’s merge time.  Of course, upon hearing about Colton’s illness, Kat is way more preoccupied trying to figure out if appendicitis is airborne.

The merge actually caught us by surprise too, and we have to tip our caps to the Survivor producers.  This is a bit early for a merge, certainly earlier than we predicted, but it really shakes up the game yet again.  It looked like Big Mike’s Co-Ed Naked Cool Club was going to trample over the weaker Manano Tribe, and the latter tribe would be lucky to escape to the merge with three players.  Now they go in with five, and, more importantly, it’s back to an even male-female split, six on each side, and it’s going to be really interesting, as Jeff of course noted, whether the new, non-gender based, alliances hold or the original ones return.  Either way, we still like Kim and Chelsea in this game, as we see them having the most power whether they go back to the girl’s alliance or stick to their Fearsome Foursome with Jay and Troyzan (we recommend staying with the men, as it could be very important to have male allies as you move into individual challenges).  But as all the players return to a now unified Big Mike’s Place, the possibilities are vast, just like our continued hatred of Colton.

As most people (not Jonas) say, karma’s a bitch.  Colton acted like a jerk, was cruel and mean, and he got was what he deserved.  It hardly ever happens, but, for one day, justice was served.  And much like Kat’s ice cream, it’s a dish best served with every single topping on a cone.