Before we talk out last night’s Top Chef: All-Stars, we need to talk about our feelings regarding Chinatown.

Chinatown is our least favorite part of Manhattan.  That is, of course, if you even choose to consider the neighborhood part of Manhattan, which we have trouble doing.  We recently had the misfortune of reporting to an office in the heart of Chinatown everyday, and it was a miserable experience (going to Chinatown, not the job).  The Grand St. B-D station is our least favorite stop along the New York City subway’s 656 miles of track.1 We’ve long detested the experience of exiting that station, being hit with the foul stench of imported fish, most pungent in the mornings when the seafood is “fresh.”  The neighborhood is a visual and olfactory nightmare of rotting fish, fruit with horns, garbage and garbage juice.

A friend recently relayed to us how upon taking the Fung Wah bus back from Boston on the Thursday morning following the blizzard he found the streets of Chinatown were barely plowed, if plowed at all.  Which is not in the least bit surprising, as Chinatown is basically a sovereign nation until itself.  You get the distinct feeling that when they set up shop near Canal Street that New York City just said, “okay, guys, you’re on your own.”  You step across Delancey or Allen Streets and you have the impression that you really do enter another country, one that is not serviced by the NYC Department of Sanitation.  Comedian Julian McCullough recently explained the concept of Chinatowns like this (and we’re paraphrasing here), “Chinatown is when a bunch of Chinese people arrive in a city, look around and say, ‘Yeah, we’re not doing that.’”  And that’s what it’s like!  We would literally walk down Forsyth Street, encounter a storefront full of old Chinese men yelling at some broadcast on a projection screen and have no idea what wa going on.  Chinatown is the Matrix.  WHAT IS CHINATOWN?

So, Top Chef contestants, what we’re saying is that we’re sorry you had to go there, and we don’t blame you for not putting out your best work from a grungy Chinatown basement kitchen (the building we worked in was chronically and irrevocably infested with mice and roaches.  The pest control company informed us that vermin come from the ground up.  Guess what was on the ground floor.  Yep.  Of course.  A Chinese restaurant.  There are NO RULES down there.  It’s like Chinato…oh, right).

So with that out-of-the-way, let’s get on with the recap.  First off, we thought of a hilarious joke about Jamie.  You know how she always makes scallops?  Hey, Jamie, it’s called Top Chef, not TOP SCALLOP (nailed it)!  Fabio, you can use that (But be warned, we’re keeping “It’s Top Chef, not TOP GNOCCHI!” at the ready).

While we really liked Jamie during her Brooklyn season, she has been nothing but a bitter disappointment in All-Stars (she accuses Antonia of PMS’ing, while we were wondering, in light of Jamie’s season long sour disposition, if it’s possible to PMS for two weeks straight.  Ladies, any help?).  While she was bright and fun the first time, now she’s dour and disinterested.  Even more, Jamie’s become Harry Houdini, either disappearing (and not having to present her dish) or escaping certain death (barely getting by for the third or fourth week straight).  She’s adept at magically switching places with her other cheftestants, as she said abracadabra and then Spike went home after the US Open challenge and not Jamie, even after she refused to present her dish and possibly cost her team a victory.  And then she said, “For my next trick, I’m going to make Casey disappear.”  And with a wave of Jamie’s overcooked green beans Casey went poof.

But we, and all you out there, no doubt, disagree.  We’ll say it even if Padma won’t.  YOU ARE THE WEAKEST LINK JAMIE PLEASE PACK UP YOUR KNIVES AND GO GOODBYE.  Go do the Amazing Race with Stefan, because you are no longer welcome here. 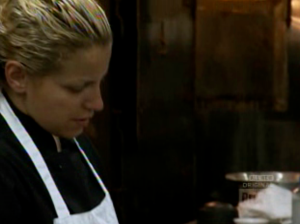 Not that Casey was entirely blameless.  Deciding to cook chicken feet was a terrible idea.  Not specifically because they’re difficult to cook properly and Casey should have known she wouldn’t have the time to executive the dish effectively, but because they’re disgusting.  We’d often walk through Hester St. Park in Chinatown, an area we affectionately refer to as “the Hellmouth,” and spy locals mainlining chicken feet, and chicken beaks, and chicken tongues, and other parts of the chicken that should not be found in wonton soup.  These park goers would eat these fowl parts as if they were candy, out in PUBLIC, where anyone could see.  And it made our stomach turn.  So, for Casey, the mistake was not execution, but conception.

But we should apologize to Casey, because we can’t help but feel that her exit was somehow our fault.  At the beginning of the episode, we thought to ourselves “You know whom we like?  Casey.  She just seems laid back, yet determined.  Confident, but humble, skilled but not showy.  She might be the dark horse in this.”  We should have known right then and there that she was going home.  Sorry, Casey!  Our bad.

Now, everyone, get in Mike Isabella’s brand new Toyota Prius Hybrid2 and head back to One Brooklyn Bridge Park3 and never look back!  GO!  NOW!