The Return of the King

Since sources indicate that the Cavaliers are delivering a strong pitch to LeBron James to return to the Cleve, I thought we’d have a little fun, step into the fantasy machine, and imagine what King James might look like in a Cavs uniform, should he choose the city so nice the Browns have called it home twice. This is a very crude mock-up, but I think it gets the idea across: LeBron would look GREAT in the ol’ blue and orange. The talk is very preliminary, but it just feels right, doesn’t it? 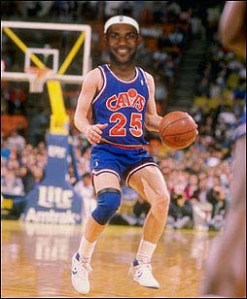 Well, this was a long time coming, but now that we’ve reached the all-important game-changing merge and oxygen-sucking loudmouths Shamar and Brandon are gone, it seems like a good time – perhaps the only time – to deliver our Survivor: Caramoan – Fans vs. Favorites 2 Legit 2 Quit celebrity look-alikes and player odds (for those Survivors still in the game). Let’s do this a little differently this time around and look at the Favorites then the Fans. We’d tell you to buckle up, but that seems really unnecessary considering you’re probably just sitting on a couch or at a desk or maybe on the subway, and even then it’s the movement of the train and not the content of this article that is most likely to create some turbulence.

Andrea: If we want to talk about people who really learned from Boston Rob (as opposed to Former Federal Agent(?) Fillip), then Andrea might be the one in that discussion. Her acuity for the game is what hurt her last time – and her infatuation with Matt – as Boston Rob respected her ability and intelligence but more importantly recognized her as a threat. There’s no one as cunning as Boston Rob on Caramoan, so Andrea has a shot to put it all together this time, especially now that she’s made the merge with the new powerhouse Goya tribe. However, there’s something in those smokey eyes that tells us that she’s going to play the game a little too hard and a little too paranoid, and that will be her downfall (much like Tara Reid experienced a similar fall. But that was due to the shots of Patrón and required several stitches). 11:1