Oh, no, not really.  More of the same blasé, dead inside, zombie-like enthusiasm.  Although, to be fair, it was the most energy she’s shown in some time, actually presenting a dish two weeks in a row!

But first, Marcel drops some knowledge on Dale:

And then they go fishing!  And everyone is so excited to catch even one fish.

And, we have to say, love is in the air.

Even though the challenge called for traveling out to Montauk to catch fish, then picking up fruits and vegetables at the local farmer’s market, and then cooking on the beach, they returned to NYC that night, ostensibly to allow their fresh catch and produce to sit overnight, and then be tainted by the sand at Long Island City’s Water Taxi Beach the next night.  Sure, it’s a gorgeous view of Manhattan (it occurred to us at that we’d be stupid not to visit the beach this summer), but it seemed silly not to just have an east-end cookout, especially after traveling all that way and getting their forearms so sore reeling in those striped bass (right, Dale?). 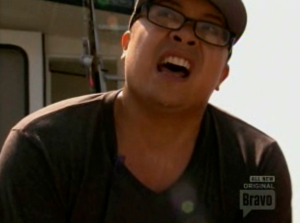 But that’s not what happened and instead the next night they prepared their fishy meals at East River beach and Jamie complained about EVERYTHING.  It was too hot.  It was too sandy.  She was too tired.  Cucumber was dripping all over her.  There was no sugar because she used it all.  Just one downer after another.  C’mon, Jamie, we’re trying to enjoy the view!  And everyone else’s food!

Well, [SPOILER ALERT!] Carla wins with her lettuce wrap that somehow is somehow a tribute to the NY bagel even though it’s a lettuce wrap and that’s totally not a tribute to the NY bagel (we guess;  we’re not [SPOILER ALERT!] Tom Colicchio, so we reckon we could be wrong).  Then again, it’s topped with pumpernickel bagel croutons (or something), so it’s basically a pepperoni pizza Reuben sandwich strip steak cheesecake.  You know, as NY as it gets!

On the bottom are Tiffani (redhead), who made the same thing as Carla, but with less pumpernickel bagel croutons and more bluefish blood line; Jamie, whose goal seemed to be to make the most boring, blandest, most forgettable dish possible; and the trio of Professor Ricky Blaise, Fabio the Strange Italian Immigrant and Eminem Marcel.  That threesome had the brilliant idea of only making one dish, and then agreed upon a concept that was wildly inappropriate for a beach setting and contained so many elements it could have been divided into six different plates (there might have been TWO kinds of foam).  But, it was a strategic move as they assumed that even if their one dish was on the bottom the judges would have a hard time singling out just one member of the team.  And, since it was only a double elimination challenge, they couldn’t vote out all three chefs.  Numbers game!  And, let’s face it, the judges weren’t going to excuse the Blaise (for fear of riots), and since his contribution in conceiving and executing the dish was roughly equal to Marcel’s, Marcel couldn’t go home either.  Fabio just agreed to their vision, and handled all the prep work.  And, as we’ve learned many times from Jamie this season, the safest bet to advance is to not cook at all, at least be able to defer responsibility for a dish, so Fabio was secure.  Of course, Jamie refers to their decision to cook a single dish as a “cop-out.”  Takes one to know one!

With the male trio safe, that meant that the bell finally rung for Jamie, whose tasteless striped bass in a watered down cucumber water broth was her Executioner’s Song.  Should have just not presented, Jamie!  That strategy was working to perfection.  To be fair, she was bummed upon her exit, remarking that she was disappointed that there were two challenges she didn’t cook on, and the one dish she was proud of the judges didn’t care for (we guess that means every other time she cooked she knew her food wasn’t very good).

JAMIE, YOU ARE THE WEAKEST LINK PLEASE PACK UP YOUR KNIVES AND GO GOODBYE

Which also meant that Tiffani was the unfortunate chef who was the victim of the double elimination challenge (although, Antonia was the real victim, as she would have won the challenge and a trip to Amsterdam had the other 2/3 of her team not been the worst.  Antonia, feel free to blame Jamie).

TIFFANI, YOU ARE THE SECOND WEAKEST LINK PLEASE PACK UP YOUR KNIVES AND GO AFTER JAMIE GOODBYE

A final note, do you think it’s odd that Top Chef simultaneously voted off its two lesbian competitors?  Really?  You do?  It’s not weird at all.  Stop trying to find controversy where it doesn’t exist.

Although, this felt like a strange final moment for Tiffani, and for the episode, as we don’t recall ever hearing about Kelly before:

Up next: Restaurant Wars.  Which means that Fabio better have some ChapStick handy after kissing all those middle age women.

And, since there’s no other place for us to say this where it will make some semblance of sense, we’re going to attempt to dine at Momofuku tonight.  Don’t check back tomorrow for a full review!