My New Favorite Show: Don’t Cry For Me, Tony Danza

My new favorite show finally premiered this weekend, as A&E’s Teach: Tony Danza graced the airwaves after a year of waiting.  And it did NOT disappoint. 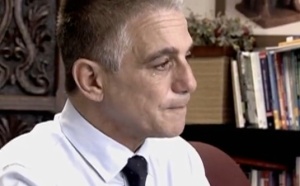 And, as we surmised, we were actually drawn in by Danza, because he’s taking this so darn seriously (now, that is a good thing.  The show would be no better than I Love Money if the celebrity teacher wasn’t taking his assignment in earnest).  We knew that he would approach his role with a total commitment, but we didn’t anticipate that he would be so emotional, so nervous, so insecure and fragile.  Here’s Tony Danza, star of screen, film and (tap) stage, former boxer, reduced to tears by a class of pimple-faced, metal-mouthed 10th graders.  It was hard not to feel for him, but it was as equally difficult not to empathize with the students, most of whom clearly feel that they’re smarter than their teacher (and we all remember enduring a teacher or professor who was obviously overwhelmed and over-matched, if we weren’t smarter than the instructor then we were at least more savvy and aware ).  But fortunately for Danza, and for the students, he’s not teaching math or science, or another subject where he could fumble the curriculum and critically damage their educational development.  Instead he’s teaching English, where it’s equally important to learn how to express yourself as it is to read The Chocolate War.  So, using his life experience, charisma, guile and tap-dancing skills, hopefully Danza can get his students to open up, to learn something about themselves.  Certainly, this is going to be a journey for Tony, and we’ll along for it.  The question is if his students will follow as well.  He should probably start by screening Who’s the Boss?, because apparently only Chloe, who is “a big fan of the 80s” is truly familiar with his oeuvre (also, chill with the hand sanitizer, Mr. D!).

Looks thin though, doesn’t he?  And where’s that coif we’ve come to adore?  Does nothing stay the same?

Tagged as A&E, Chocolate War, Teach, the 80s, Tony Danza, Who's The Boss