This season we’ll be taking our ‘Survivor’ recapping talents to Gawker TV.  However, we’re going to also offer expanded, “Director’s Cut” recaps on this blog.  So here we go.  Day One.

The challenge for Survivor: Redemption Island is going to be keeping us interested in anyone not named Boston Rob or Russell Hantz.  Our fear going into the premiere was that the presence of these veterans would overshadow the new Survivors.  However, for one episode at least, we got just enough Boston Rob and Russell while also introducing some intriguing new cast members.  We’re not entirely convinced that there are any personalities that can match up to the two masterminds, but judging from an explosive, unbelievable, train wreck of a first Tribal Council, we’re in for a season of crackpots and fireworks.

But, before we get there: helicopters!  And Probst just enjoying the feel of the cool Nicaragua air hitting his face.

The new castaways land and they’re ready to start the game.  But there’s just the matter of that one extra wrinkle to this game: the aforementioned return of Russell and Rob.  Unlike Russell’s last turn in the game, two seasons ago on All-Stars, he is no longer an unknown.  These players have seen (or should have seen, if they were smart and did their Survivor homework), Russell play two seasons, lying, manipulating, scrambling and bullying his way to the final both times.  Likewise, they’ve watched Boston Rob attack the game three different times, appearing more impressive and confident each time around.  So it was a very astute observation by rookie Francesca that Rob and Russell were “sizing us up like we’re pray.”  That was dead on.  By this point Rob and Russell are so attuned to this game that they can see the Matrix; to all the newbies the game is still just a bunch of random numbers, letter and symbols, but to Russell and Rob the picture is clear, and they can already see three or four moves ahead.

Outwardly, Russell and Rob are accepted in their tribes with open arms, Russell to Zapatera and Rob to Ometepe, but the Survivors are rightly wary of the two.  As we’ve previously argued, the best decision the new players could make would be to keep Russell and Rob around, at least for a short time, to exploit their knowledge and considerable skill.  But, instead, the game starts right away, and Phillip immediately tries to exert his alpha male control at Ometepe, basically telling everyone to shut up for a second so he can announce that he’s a former Federal Agent for three separate government agencies.  Because everyone knows the best way to win Survivor is to tell everyone on day one how great you are and that no one should lie to you because you’ve interrogated terrorists.  You know, Survivor 101.

But this was just another case of overplaying the game on day one, which was pretty much the theme of this episode, as Kristina immediately began looking through the provided tools and items for the Immunity Idol or clues to one.  Pretty savvy stuff, but Rob picked up on it right away.  Sorry, Kristina, you’re playing with the big boys now, and you just put a huge bulls-eye on your back.  A bulls-eye in the shape of the Red Sox “B.”  A bulls-eye that drops its “r”s.

Kristina then, without having found any clues, just decides to look everywhere for the Idol, which is like searching for a needle in a haystack in a jungle full of haystacks.  GOOD LUCK, Kristina.  Who do you think you are?  Russell?  Then, of course, Kristina finds the Idol.  Wow.  Okay, our bad.  But with that feather in her cap Kristina gets a bit too big for her britches, beginning to plot Boston Rob’s ouster.  Which is a) totally unnecessary on day one, b) would only weaken her tribe and c) alienate Rob, which would be a huge mistake.  The better play would be to go to Rob, tell him she has the Idol, and then work together.  But Kristina’s just totally jealous that all the young girls (and Matt) have a HUGE crush on Rob, so her mind’s pretty much made up. 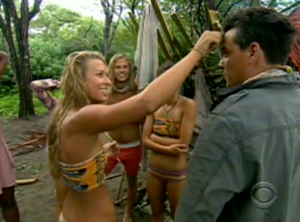 It was your typical first episode brute-strength-followed-by-a puzzle Immunity Challenge, but curiously we found ourselves rooting for Boston Rob and the Ometepe tribe.  Now, in the interest of full disclosure we should mention here that we’re firmly in Russell’s corner.  We were there during All-Stars, and we see no reason why that would change during this season.  But we like to watch Russell scramble, to witness him do what he does best, which is create havoc and chaos.  And we’ve become accustomed to Boston Rob leading his team to victory, especially when there’s a puzzle involved.  And he almost pulled off a miraculous comeback here.  But the Zapatera tribe had too much physical power, and had too much of an insurmountable lead, and received too little screen time in the first half of the episode, that even with some creative editing their victory was a foregone conclusion.  And thus it was Rob, not Russell, who would be first up on the chopping block.

And thus began probably the most entertaining, stunning, and foolish first Tribal Council in Survivor history, as the alliance between Phillip, Kristina, and Francesca unraveled in matter of minutes, with the finger-pointing beginning almost instantaneously.  We can’t recall players shooting themselves in the foot so quickly in a game, but that’s what happened here, and just like that the balance of power swung entirely to Rob.  Even more, Phillip spilled the beans about Kristina’s Immunity Idol, extinguishing the last bit of leverage she had. It’s pretty safe to say that Rob knew Kristina had found the Idol – he at least knew she had scoured the camp for it – so there was no way Kristina was going to blindside him.  He was already one step ahead.  But the novices made it easy for him, and Rob just sat back and watched them come apart at the seams.  Rob said it best, “you don’t even know enough to keep your mouth shut.”

Oh, and Phillip can’t pronounce the name Francesca, allegedly because of a dry mouth problem he’s getting treatment for.  Okay.  Sure.  But what’s his excuse for this? 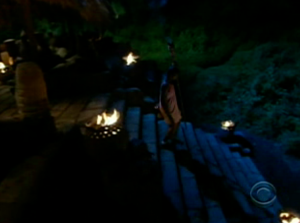 But while Francesca is down, she’s not completely out.  No, she’s off to Redemption Island.  As recently as yesterday we were skeptical of the Redemption Island twist, dismissing it as just another attempt to spice up the game, to fix something that didn’t need fixing.  But now we’re starting to warm to it.  Not because we like Francesca and think she’s going to outwit, outplay and outlast on Redemption Island and return to the game later on, but because we now understand the danger in voting off someone like Boston Rob.  Sure, if Kristina didn’t overplay her hand, then she might have been able to snuff out Rob’s torch, but is sending him to Redemption Island the smartest move?  Sometimes it’s best not to rattle the cage. 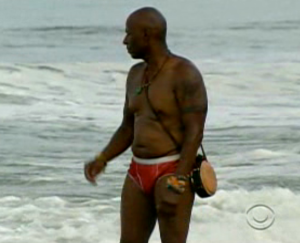 – We honestly have no idea what’s going on here.  What are they blurring out?  What’s happening back there??

– The other members of the Ometepe are REALLY crushing on Rob.  Ashley, who so far is leading the competition for biggest airhead, even says they “want to please their leader.”  But it’s Matt who seems the most smitten.

– Also, is Matt actually Nicaragua winner Fabio?  (with maybe some additional beer weight?  A million dollars can by a lot of beer.  Tecates).

– Meanwhile, over on the other side, Russell’s already “got his hooks” into Stephanie.  The other members of Zapatera have noticed, but that doesn’t worry us, or Russell.  Zapatera is 1-0 with Russell leading the charge, and he should be able to talk his way through any upcoming coup attempts.

– Is Ralph, aka “Steel Wool,” wearing fatigue overalls and a cut-off denim shirt?  Isn’t that a little redundant?  Also, stay out of the shot, buddy.

– Man, do we love Jeff Probst.  What a sight for sore eyes.  And let’s get him while we can

– We get it, Survivor, you’re sponsored by Sprint.  But we don’t need those “What If?” spots during every commercial break, asking what if previous players like Samoa’s Shambo and Nicaragua’s Jane had a second chance on Redemption Island.  What if you didn’t take away precious moments from the actual episode for useless ads?

We like to end every Survivor recap with an A-B-C phrase in the style of Glengarry Glen Ross.  For Redemption Island episode one our A-B-C of the week is:

Because right now, that’s how Boston Rob is playing it.  He sees that he just needs to relax and the pieces will fall into place for him.  Meanwhile, had Kristina just taken the game a little slower she might not have lost her closest ally in round one.  Remember The Fonz, guys.  Stay cool.

Next week: The first Redemption Island showdown.  Plus, player-by-player odds!

Filed under Analysis, Be careful what you wish for, Century 21 Reality, It's gross., Tribal Council