You Don’t Know What You Got ‘Til It’s Gone: Quick Thoughts On Last Week’s NBC Thursday Comedies 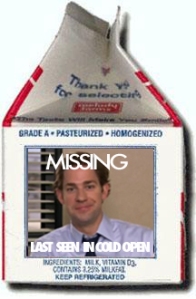 That’s how we felt about The Office.  As much as we’ve harangued the show this year for underusing or misusing Jim, rendering him no more than the Greek chorus, it turns out that we really need him.  Absent for the entire episode, save the cold open, we kept waiting for the camera to cut to him, to confirm the absurdity of the situation.  But he wasn’t there (Jon Krasinksi off shooting a movie, we assume), and without Jim to ground Michael’s insanity it was a runaway train.  Now, they could still cut back on some of the Jim reaction shots, but as long as Michael is around, we’ll need that balance.

Speaking of Michael, we’ll wonder if we’ll feel the same way when he’s gone.  Because, right now, we’re eager for him to get moving out of Dunder Mifflin.  The act has finally grown tiresome, and it often suffocates the other characters and the show.  We’re sure we’ll miss him, but that doesn’t mean we’ll want him back.  However, Kudos to Mindy Kaling and Craig Robinson for continuing your MVP seasons.

Parks and Recreation, welcome home!  Thank goodness you gave us that season two recap to get us back up to speed (we could have used that for The Office and 30 Rock as well, frankly), and it seems like you haven’t missed a beat.  We think it got a little too broad at times (Andy with April’s new boyfriend, for example), and the overuse of things like the “Ron Swanson Pyramid of Greatness” worry us, but it’s definitely picking up where it left off, as the second best show of the night.

Which brings us to Community.  Oh how we missed you!  And you were only gone for six weeks.  Don’t stay away that long ever again!  You guys came back from the Christmas break without any rust, setting up what we can only assume will be an even better second half of season two.  Looking forward to it.  KEEP UP THE GOOD WORK.

Filed under Analysis, Dunder Mifflin, this is Pam, Good Humor, Greendale Human, Must See TV, We'll Get It In Post