First, the monologue *:  What a couple weeks for the Muppets, eh?  First, they take the interweb by storm with their “Bohemian Rhapsody” video, then Jumped The Snark links to a classic Swedish Chef sketch and a Muppet-BSG mashup, and then Kermit gives Tiger Woods the what for on The Today Show (and, as I learned later on “Weekend Update,” apparently Cookie Monster recently groped Tyra Banks. Good work, CM!).  And then, to cap it all off, SNL trots out their version of the Electric Mayhem, with the cast doing their best Muppet impressions (Fred Armisen makes a particularly good Zoot).  Now, I’ll take any Muppet related comedy whenever I can get it (assuming, of course, that it respects the Muppet legacy), but I had a few concerns with the SNL Muppets taking the stage to sing Christmas Carols with Blake Lively: 1) This performance didn’t quite match the last time they pulled out the Muppets, the Muppet Bus sketch with Seth Rogen, both because then the novelty was still fresh and because Rogen made for an eerily convincing Rowlf; 2) I realized the bit would be more enjoyable if it included the real Muppets (as we knew that Kermit and Miss Piggy were in town plugging Letters to Santa I thought that this might actually happen).  Why settle for the substitute when the genuine article could be a phone call away?  Plus, with Kermit lately demonstrating an acerbic wit he could have taken a few cast members to task for unflattering portrayals; and 3) often when the monologue consists of a large cast performance it indicates that the host is either unprepared and/or not talented enough to pull off a sketch by him or herself.  Fortunately, while the monologue didn’t quite highlight Lively’s abilities, she proved later in the show capable of at least holding her own (and highlighting her own, as Vulture astutely points out).

Also, who makes a better Swedish Chef, me or Andy Samberg (just imagine that I was able to find a red bow tie)? 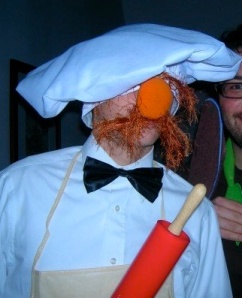 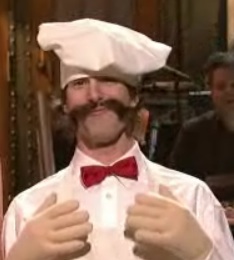 *(we’re considering the monologue to be the beginning of the show because the cold open, while amusing, has become such an obvious topic of the moment political sketch that’s it’s become rather innocuous.  You know that they’re just going to take whatever subject has been discussed the most on every cable new outlet and has likely already been thoroughly eviscerated by The Daily Show or The Colbert Report and put together something appealing but completely forgettable.  Without the zeitgeist capturing election year fodder this season’s political cold openings have had no oomph, and by Saturday night they are already mostly irrelevant.  With the election commentary and debate spoofs they might have been replaying events and quotes, but in doing so they put a new spin on it.  Now their satire reveals nothing new, it just seems more like routine than an attempt to be witty or biting or significant).

Now from the beginning we’ll move straight to the end.  After the last episode we suggested that they just rename the final bit of the night “The Jason Sudeikis Sketch,” because lately he has just been owning the 1:50am time slot.  However, for several seasons now the final sketch has also been a playground for Will Forte and his absurdist, crazytown humor (see: Fart Face, Jackie Snad & Clancy Bachlerat).  So it was only a matter of time before the irresistible force met the unfunny object (Sorry, Will, it’s just a matter of personal taste).  The result is what must be the weirdest, most surreal sketch of the season, “Potato Chip.”  And, combining the charm of Sudeikis with the everything but the kitchen sink mentality of Forte, it almost kind of worked, really just by the sheer force and conviction of the acting; as Ken Tucker notes, “Forte and Sudeikis were so ferociously committed to this material, I ended up admiring the hell of out them. I didn’t laugh, but I had to hand it to them.”  And I really didn’t want to like this sketch, but I have to admit, it sort of won me over.  But please, let’s not make this a recurring sketch (unless it’s a weekly feature.  That sounds kind of interesting).  Watch and, well, maybe not enjoy, but admire:

But you can see the difference between that sketch and one that is just silly for the sake of being silly, that doesn’t have a real perspective.  “Potato Chip” throws in a trunk full of desperate elements and forges them together into something almost coherent.  Whereas a sketch like “New Secretary” from earlier this season does not:

And, to kind of synthesize the two, this is what we at Jumped The Snark believe is the best all time example of an absolutely ridiculous sketch that somehow completely works.  How this sketch ever got past the table read I’ll never know.  Watch it now while you can:

Now whereas “Potato Chip” is a paradigm for a sketch with a tenuous premise that succeeds through its execution, much of the show suffered from the opposite, clever premises done in by poor, lazy follow through.  “Gossip Girl: Staten Island” was a pretty obvious but promising idea in theory, but turned out to just be a series of clichés and dated stereotypes (plus, as many blogs have noted already, the effectiveness of this sketch is basically incinerated by the existence of  MTV’s Jersey Shore).  Likewise, “The Chris Hansen Show” sounded fun (and we appreciate any “To Catch a Predator” references), but it felt like they worked to come up with a premise and didn’t put in much effort beyond that.  And finally, The UPS commercial parodies were a bit half-baked, especially the conclusion of the second, but they were so convincing and Bill Hader so creepily charming that they were another highlight:

Another high point was Seth Myers on “Update.”  The gloves seemed to be off today, and Meyers appeared especially caustic (see: the aforementioned Cookie Monster incident, and Meyers forgiving CM for going after some “brown sugar”).  A few weeks ago EW offered their “10 Ways to Fix SNL,” and #6 was “Set Seth Meyers Free.”  Have to say that they seem right on about that.  Also on “Update” Kenan Thompson pulled out his Bill Cosby impression, a mimic he has been doing since his days on All That, which only goes to further prove our theory that he’s just doing variations on his characters from the Nickelodeon show.  In addition, Abby Elliott brought out her Brittany Murphy impression, which was just fine, but Brittany Murphy?  Really?  Why?  It feels like they just find what out impressions Elliott can do and then force those characters into a bit, rather than focusing on who is relevant and then seeing if Eliott can pull off that impression.

Looking back now, this show was pretty chock full.  Four commercial parodies (another “Carter N Son’s BBQ” and the very funny and accurate “Underground Rock Festival“) another musical digital short (“Shy Ronnie“), another dreadful Virginiaca, and the requisite Tiger Woods sketch.  But in the end it was really quantity over quality (real good quantity, real average quality).  The writers had the Thanksgiving weekend to take a break and come back strong with Blake Lively, and the benefit of the rest showed, at least output-wise.  But let’s hope they can keep up that level of ambition this weekend when Taylor Lautner hosts, or else we could be looking at another precipitous drop.

There is one more sketch we’ve yet to mention, the first sketch after the monologue (the lead off position, if you will): “The Vagisil Superstars of Bowling Tournament,” a spin-off of the “Ladies Billiards” sketch we lauded a few weeks back.  It was nice to see that the original got the recognition it deserved, a bright spot in the otherwise forgettable January Jones episode, but not so sure this is the kind of sketch that requires the recurring treatment.  Again, this was more like a fill in the blank exercise than building and improving on the original.  Nevertheless, we’ll take it, and with Sudeikis and Forte at their best it makes a nice bookend with “Potato Chip.”

One final note:  Show seemed a little light on Kristin Wiig this week, no?  She appeared in 4 of the first 6 sketches (cold opening, monologue, ladies bowling and “Gossip Girl: Staten Island”), but didn’t have too much to do in any of them (save for maybe the cold opening, but that was a silent performance), and none featured any of her trademark eccentric characters.  Are they deliberately lightening her load?  Was Blake Lively so adept that she was able to steal a couple Wiig roles?  Or was  this just an anomaly?  Stay tuned…

4 responses to “SNL: Blake is Lively, Astronaut ‘Tater Chips, and the Muppets are Just Killing it Lately!”