You’re Not There to Make Friends. But Are You There to Cook Good Food? Questionable.

On this week’s Top Chef chefstant and house mother/pariah Robin joined the hallowed ranks of reality TV competitors like Omarosa and Kelly Wiglesworth who have uttered the now legendary phrase “I’m not here to make friends.”  This reminded me of a segment from the recent This American Life episode, “Frenemies.” In this act, titled “I am here to make frenemies,” Rich Juzwiak of the blog foufour details the evolution and now ubiquity of this quote in reality TV shows.  He also put together a thorough “I’m not here to make friends” highlight reel.  Enjoy!

The ‘Office’ Has Not Jumped The Shark 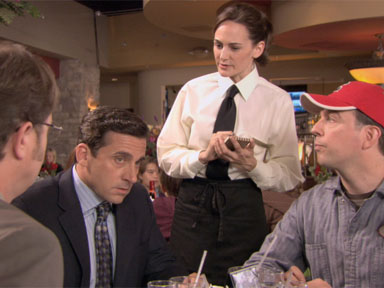 After feeling like I was in the minority with my mild disappointment with last week’s wedding episode, I was pleasantly surprised to discover that I was not alone in my distaste for last night’s The Office, “Mafia.”  I watched it in a new place, with a large dinner still digesting, the mood already soured by another messy, frustrating episode of Glee (a story for another day), so I gave this latest Office entry the benefit of the doubt, even though I found it much too silly and the premise (Michael, Dwight and Andy believe that a local insurance salesman is “connected”) too far fetched, even for this show.  Something seemed off, and I sensed there were far too many stretches without laughs, and even the ones that occurred often felt forced.  So I was actually rather comforted when I flipped on the ol’ Internet and found near unanimous negative reaction for this episode.  However, my appreciation was short lived, as it seems that after one episode, the blogosphere is hitting the panic button, fearing The Office is past its prime, and maybe should be put down like an injured thoroughbred.  Indeed, Cinemablend titled their recap, “NBC’s The Office Isn’t The Show It Used To Be.”

END_OF_DOCUMENT_TOKEN_TO_BE_REPLACED

Filed under Analysis, Dunder Mifflin, this is Pam, Growing Pains, Must See TV, Saved by the Bell