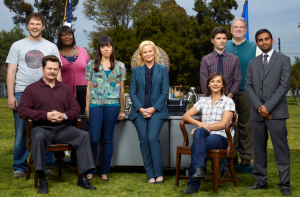 With Parks and Recreation making its long, long-awaited return tonight, we thought it would be appropriate to take a look back at a post we wrote in September of 2009, just before the show returned for its sophomore season.  Right now, in January of 2011, Parks and Recreation is widely recognized as one of the best, if not the best, comedies on television (which is why it was so excruciating when the series was pushed until mid-season to make room for the abominable Outsourced), but just about 17 months ago when it was coming off a lackluster, somewhat disappointing first season the story was much different.  It’s developed into one of the most reliable, warmest, funniest shows on network TV or any other channel, and boasts perhaps the deepest ensemble cast, but back before its second season the jury was still out, and it was a show very much still finding its footing.  But Jumped the Snark went ahead and asserted the potential of the show, watching the first season and finding much room for improvement but also much room for greatness.  And we think its fair to say that both this blog and Parks and Recreation were vindicated.

In that post we outlined three areas where Parks and Rec most needed to progress to reach the quality of a show like The Office, its spiritual forefather (and not only has Parks and Rec equaled its progenitor, it’s now surpassed it.  The student has become the teacher).  Let’s take a look at those recommendations and how Parks and Rec took them into consideration.

END_OF_DOCUMENT_TOKEN_TO_BE_REPLACED

*Editor’s note: Jumped The Snark has been and will be busy for the immediate future on another somewhat related but also not really project, and thus updates may be few and far between for the next two months.  We’re going to do our best to keep up regular posts, but they may be of the very brief variety.  That is all.

Fallon proves once again that his show is the place to turn for pitch-perfect parodies (see: “Real Housewives of Late Night,” “Late“), and this time the team turns its scalpels towards the unfortunate phenomenon that is Glee.  And not only does their version, “6-Bee,” capture the exact tone and rhythm (and hokeyness) of the show, it pits the Late Night glee club against the Parks & Rec squad, treating us to Amy Poehler, Chris Pratt, Jerry and Jumped the Snark long time favorite Rashida Jones (but wherefore art thou, Asiz Ansari?), as well as an appearance from another longtime favorite, Fred Armisen.  And it all culminates in a truly impressive take on Twister Sister’s classic anthem of rebellion “We’re Not Gonna Take It.”

(You may have figured out that the one thing I hate, as mentioned in the title, is Glee (the show, and by extension its cultural resonance).  A long time ago I intended to write a long blog post explaining why its characters are just caricatures, the tone muddled, the perspective confused, and that while I’m happy for Jane Lynch, her role in Party Down trumps her one-note performance as Sue Sylvester.  And this thoroughly enjoying Late Night interpretation shows that without the dramatic musical sequences Glee would just be a cut-rate Degrassi.  There, I finally said it).

And if that all wasn’t enough, later in the show we were treated to a charades battle of the former “Weekend Update” co-anchors, with Fallon and guest Tina Fey taking on Poehler (clearly pregnant by the way) and her old partner and current solo host Seth Meyers.

And to top it off, arch-nemesis and top search term Justin Bieber!

Keep up the good work, Jamie!