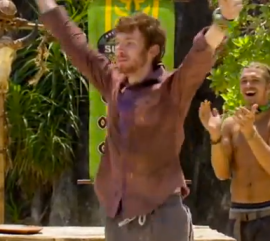 One of the great paradoxes in Survivor – an element of the game that makes this show truly fantastic and always enjoyable – is that to make it far  you must build a strong alliance with a numbers advantage, but a strong alliance that has the numbers almost always means that the alliance will need to turn on itself at some point, often times the weaker members taking out the strong. In many ways, you’re penalized for playing the game too well. If you form an alliance that is too strong, too large, you may wind up eating you own tail. And frequently, this happens just after the merge, which is why this junction in the Survivor: Caramoan – Fans vs. Favorites 2 Legit 2 Quit is so critical. It could be the last chance to dump some dead weight – or a significant threat – before getting too deep. With some players on the outs looking to get back in and other Survivors feeling vulnerable in their alliance, this is the time when loyalties shift, and when the permutations sometimes feel endless. This is why you can watch this show for twenty-three seasons and still see something new.

However, before we get to a merge the BeKool tribe, still not sure if actually voted out some person named Julia or just busted the myth of her existence, returns to camp from Tribal Council and Stealth ‘R’ Us CEO Former Federal Agent(?) Fillip immediately calls a board meeting. “Conference room, now!” Stepping into his executive chambers (a completely visible space four feet from the shelter), Fill clings to the tall tale he spun to Cochran last week, explaining to S’R’U Senior VPs Dawn and Corinne that he deliberately threw the Immunity Challenge in order to vote off that person who may or may not have existed (Gulia was it?). Of course, Dawn and Corinne know this is an absolute lie that Fillip absolutely believes, and, through some feat of herculean strength, play along with FFAF’s delusion. But they know that he’s living in a fantasy world, and Corinne is starting to find it really embarrassing.

END_OF_DOCUMENT_TOKEN_TO_BE_REPLACED

Filed under Analysis, It's gross., Saved by the Bell, Tribal Council

A little late this week so let’s get right to it:

We get it Gwyneth, you can sing!  You already proved it with Country Strong, your appearance on Glee and your CMA performance (and with Huey Lewis in Duets ten years ago).  But you had to show us again in your monologue, as Taylor Swift in this My Super Sweet Bar Mitzvah sketch, and by joining meandering songsmiths Kat and Garth on “Weekend Update.’  Listen, Gwyneth, WE GET IT.  It’s a wonder they didn’t hold off the “Worst of Soul Train“ sketch another week so Paltrow could play some kind of disco queen.  But they probably thought that would be overkill.

Also, Cee-Lo, we get it.  You’re a big deal right now.  Gwyneth Paltrow covered your hit song, and hugs you and treats you like her best friend.  But we don’t need to see the you also singing during the monologue and in the Bar Mitzvah sketch and also appearing in the “Record Label Meeting” sketch that was just a device to introduce your musical performance.  What’s that we said about overkill?  We mean, c’mon, it’s not like the guy is Paul McCartney.  And, sure, we admit, “F*** You” is one of those songs we heard about ad nauseam before we ever actually heard it (much like “Umbrella”), because the only radio we listen to is sports talk and NPR.  But it is good, at the very least, it’s dangerously infectious.  However, isn’t “F*** You” just like “Hey Ya,” but not as good.  Seven years later we still think the former is a great song, not sure if the latter will fare so well in 2018.  Will it be a classic or a novelty?  Only time will tell if it stands the test of time.  But, until then, we could have done with at least one less Cee-Lo appearance.