Must Flee TV: Community – The Twilight of the First Harmon Dynasty

Today we bring you the final entry in our “Must Flee TV” series, our thoughts on the end of ‘Community’ Season Three, and, well, the end of an era. 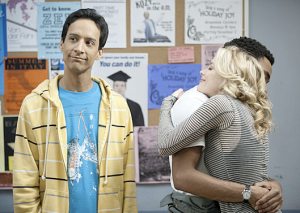 Full disclosure: when we wrote our Dan Harmon obituary earlier this week we had not yet had the chance to view the final three Season Three Community episodes.  We felt comfortable going ahead with the in memorial post because there would be nothing in those final episodes of the Harmon run to change our opinion of his work and influence on Community.  Unless one of the episodes was a shot-by-shot remake of an unremarkable episode of Friends, he could do nothing to tarnish his legacy, and, actually, they probably could pull that episode off (and by Season Six he probably would have gotten to that too).  But, as it turned out, the show had still yet another level to go, there were still recesses of our mind left to blow.

Perhaps only when Fox burned off the last four Arrested Developments against the Olympics has viewing a block of episodes felt so bittersweet, such a painful joy.  But unlike the Arrested finale night, the last three episodes of Community left us with little closure, and much uncertainty.  If anything, we’re sadder now than we were at the end of Arrested (obviously we could not know that it would eventually come back on Netflix, and we would have been foolish to pin our hopes on such a thing, especially since Netflix was in its nascent stages then).  We know our show is coming back, but we don’t know in what form, if it’ll continue on the same genius path, if it’ll forge something new and different, or if it’ll be a morbid a shadow of itself, a crushing reminder of what was.

But let’s take a step back, forget about the future and focus on the past.  The Season Three sprint to the finish – an episode that took place almost entirely in an 8-bit video game,  an Oceans 11- heist movie homage, and a cathartic, heartfelt, relatively gimmick-free finale that opened as many doors as it closed – was a testament to what this show has become.  It continued the tradition of experimenting with different genres and redefining sitcom rules, and it also maintained the growth of its characters.  But most impressively, and best illustrating the continued complexity of the show, it brought back elements introduced at varying points during the season, plot points that could have easily been rendered inessential or abandoned (and compare this to the throwaway nature of many of 30 Rock’s developments).  The finale truly felt like a culmination, finally bringing Evil Abed to the forefront, acknowledging the darkest timeline and revisiting the season-long Air Conditioning Repair Annex arc, and in casting Jeff in the lawyer role the show returned to its origins, bringing it full circle.  Except, in this circle, Jeff arrives back at the starting point a changed man, a better man, and, who knows, maybe even a better lawyer.  If this episode were to serve as the series finale then we would have been satisfied.  Jeff entered Greendale to get out as soon as possible and resume his attorney-shark career, but he found something better:  True friends.  A family.  And the same could be same for the rest of the study group.  They each had their reasons for going to Greendale, but in each other they’ve now found a better reason to attend, and in this last episode we saw this, we saw how they make each other better people.

But as good as “Introduction to Finality” worked as a series finale, it also works better as a season finale, wrapping up loose ends, showing definite character growth, and also planting seeds for the next season: Chang plots his return, City College Dean Spreck plans his revenge, Starburns assumes a new identity and Jeff searches for Papa Winger.  And if there’s anything we truly took from this season, especially after the last few episodes, it’s that the show was learning how to tell longer, more elaborate stories.  Our gut tells us that an even more intricate, complex arc was planned for next season, and it’s upsetting to think that with Harmon’s departure that direction may be abandoned, those plans lost.  We can only hope that he left behind – perhaps guarded by several zit-faced teenagers – a detailed outline noting every single beat for every single episode.  But we’ll even settle for some random scribbles on a few scattered index cards, if that means the true story of Community will continue to be told.

What we find really interesting is that the show that Community most reminds us of, rather, the show that elicited the most similar feelings, is Lost.  The minute when an episode of Lost ended was the worst moment of our week, the longest it would be until we saw the Island again.  And it’s the same way for us and Community.  Whether we watch it on Thursday night, the next night, or the following morning, we’re always left with a sense of immense pleasure and gratitude, but also incredible sadness that it’s over.  We’re always left wanting more.  And, now, with Dan Harmon gone, that feeling may never go away.

But let’s go out on a positive note, because we imagine that’s how Harmon would want it (because we can only imagine, and it would be foolhardy and arrogant to think we know what he really wants).  Here, now, are our five favorite episodes from the Dan Harmon era of Community, no doubt the three seasons that will be referred to for all-time as the Golden Age of Greendale.

Yes, we’re playing favorites because it’s fresh in our mind, and the wounds are still open, but this episode really felt like a comprehensive final exam, the doctorate thesis that combined three years of hard work, collaboration and peer review.

It was this episode that first made us realize what this show could do, that made good on the promise advertised by the first part of Season One while promising so much more to come.

We’re suckers for a good mystery with twists inside twists and for Kevin Corrigan.  Oh, and the B-story in this episode is Troy and Abed’s blanket fort turned campus-wide blanket village.  You name a better B-story.  Ever.

You could argue that the Season Two two-part paintball finale was better, and we wouldn’t protest.  But this was more important, more epic, and it was the first episode (of many to come) to leave our jaws on the floor, to render us absolutely stunned.  If “American Poultry” was Community’s arrival at the gates, “Modern Warfare” was the show ascending the throne.

And just to show that we don’t only appreciate parody and homage and genre-play, we’re happy to crown this episode as our number one.  But we’re not just trying to be contrarian.  As good as Community is when it’s sending up a zombie flick or emulating a space exploration, it’s just as good with quiet, meaningful moments.  It’s those flights of fancy that set up the instances of dark truth in episodes like “Mixology,” and, for us, it’s those times when Community is at it’s best.