This is the penultimate entry in our series of posts looking back at the NBC’s Thursday Night comedies.  Still to come is a brief review of the ‘Community’ finale (not to be confused with our already published thoughts on the show’s move to Friday nights and the exiling of Dan Harmon), but today we check-in on ’30 Rock.’ 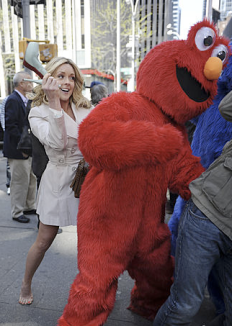 30 Rock is a curious case.  We’ve contended for years that it often is the funniest show on NBC Thursday nights.  That is to say that it contains the most laughs per minute ratio (lpms) of the four programs.  However, that has never necessarily been a compliment.  In fact – and you might be smelling a “but” coming – that proclamation has frequently preceded our criticism of the show, or, more often, been the central tenet of our negative remarks.  For much of the show’s six seasons it’s felt as if Tina Fey’s creation valued the laugh above all else, and sometimes praying at the altar of the almighty chuckle does not pay the dividends one expects.

It’s not that we’d prefer 30 Rock to be a drama (they tried that with Studio 60 on the Studio Strip and, outside of the opening theme, it was a total failure), we just think (and we concede that we could easily be in the minority here) that there’s such a thing as too much.  Too many jokes, too many gags, too many misdirections.  We recall someone in our college screenwriting class saying that he once heard the advice that when you finish a script you should locate your favorite line or passage and cut it, because often that’s the most indulgent, most distracting and least cohesive part of the work.  Likewise, we don’t think 30 Rock would suffer with a little more red sharpie on the scripts, passing on a joke here or there to let the scene breathe.  Yes, you could make the argument that Arrested Development was probably the fastest, smartest, most-layered comedy of our generation, with a similar lpm.  However, the difference is almost every joke on Arrested was crafted to be part of the whole, a building block in the episode, and, often a brick in the entire season or series, like Loose Seal vs. Lucille or the hand chair foreshadowing Buster losing his hand.  Yes, it was incredibly densely packed, but you didn’t get many of the jokes until a second or third viewing, or perhaps until a subsequent episode, so there was a deliberate construction of the gags and bits.  With 30 Rock, many times it just feels that they dared themselves to see how many jokes and non-sequiturs they can fit into twenty-two minutes, without regard to whether or not the joke has purpose.

The best comparison then is probably Family Guy, especially as 30 Rock has increasingly utilized the cutaway, a device which seemed to reach its saturation point this season.  In fact, they did something this year that we don’t recall them ever doing, which was a flashback that didn’t feature any of the cast members, just a generic cutaway to the past, and that came across as favoring a joke over abiding by the rules that they had previously established (in case you haven’t figured it out, we’re sticklers for rules).  This season they’ve also seemed to up the random quotient, particularly in regards to anything that comes out of Jane Krakowski’s mouth.  While we don’t deny being amused, the show has a tendency to float dangerously close that Family Guy territory as defined by South Park.

As a result of our perceived emphasis of the joke over the story, 30 Rock has for several seasons now been the least essential show of Thursday nights, the program that we can watch at any time, any day (although, as we noted, this season of The Office gave it a run for its money).  Do we ever not enjoy it?  No.  Do we ever consider it less than genius?  Rarely.  But we don’t approach it with rapturous anticipation like we do with Community, and it doesn’t stick with us like Parks and Recreation.  It’s just twenty-two minutes of fleeting, incredibly good comedy.  Which, to be fair, is nothing to be ashamed of.

And this past season has had some exceedingly bright spots, like the back-to-back brilliance of “The Tuxedo Begins” and “Leap Day,” a one-two punch that was as good and as ambitious as any in the show’s six season run.  Especially this pitch-perfect Groundhog Day/Liar Liar/Bruce Almighty parody:

So what then do we want from 30 Rock‘s seventh and final season?  Well, more of what we saw in the final two episodes of Season Six, which was the suggestion of growth and closure for these characters.  Across the last two episodes Liz Lemon’s live-in boyfriend Criss (James Mardsen, who’s never been more likable), begins renovations on the apartment that include the addition a would-be could-be nursery.  At the close of the season finale Liz, who’s struggled with commitment issues and baby hysteria for the entirety of the series, is finally mature enough to utter the word “baby.”  In addition, for a change the season ends with Liz still in a happy relationship, not the victim of the self-sabotage or otherwise that we’ve become accustomed to with previous romantic interests, played by the likes Jason Sudeikis, Matt Damon, Jon Hamm and Michael Sheen.  For perhaps the first time in the whole series, Liz Lemon shows true signs of growing up, of being a real person, not a collection of idiosyncrasies, neuroses, pet peeves and pratfalls.  Likewise, while Jack and Avery end up getting a divorce in lieu of renewing their nuptials, Jack seems to experience something of a personal revelation as well.  Not quite as dramatic as settling into a long-term relationship with the very real possibility of a baby, but certainly a moment of clarity and self-awareness.

We don’t want the show to go soft, and we don’t want it to dull its edge, and we certainly don’t want it to lose its voice, but as the final season of 30 Rock progresses it would be nice to see the characters progress with it.  Doesn’t need to be dramatic, just evidence of some kind of trajectory.  But in the end, of course, it’s about the journey, not the destination.  And it wouldn’t be right if the show didn’t try to break its own laughs per minute record.

But one request: no more live episodes.  Next time broadcast from the future.

One response to “Must Flee TV: ’30 Rock’ Season Six – The Penultimate Warrior”