A little over a year ago I posted a piece comparing the David Bowie avatar from Lego: Rock Band to his look as Jareth in Labyrinth, noting the obvious discrepancies between the groin-regions.  It went on to be one of our most read posts of all time, due in no small part to the frequent search term “Labyrinth David Bowie, ” a group of words that sees its most action during the Halloween season.  So, with that in mind, let’s revisit that post one more time:

The first images and video of the David Bowie avatar from the upcoming Lego: Rock Band game hit the web this week.  Vulture posits that “Bowie’s penchant for androgyny makes him a perfect candidate for being immortalized in Lego form.”  However, while Ziggy Stardust certainly is the standard for androgyny,  the image of David Bowie as Jareth the Goblin King in Labyrinth has been burned into my brain, and I can’t help but feel that Lego Bowie is missing something. 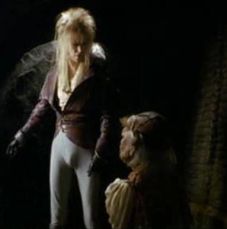 (Hint: It’s not the gloves)