No Clever Headlines, Just the Best ‘The Office’ in a While 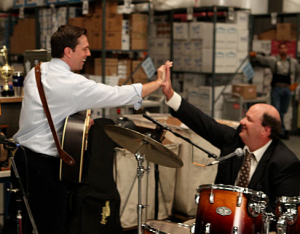 Finally.  FINALLY.  This was the kind of episode we’ve been waiting for all season, that we’ve been waiting for since last season, and maybe even before that.   We’ve begun to feel like a broken record on this blog, constantly finding more negative than positive with The Office.  But, for the first time in a while, we can honestly feel good about the show.  Giddy even.  And it’s a nice feeling.

For some reason, from the very beginning of this week’s episode, “The Sting,” the show was hitting all the right notes.  The cold opening was spot on: irrelevant, flippant, fun.  Like a good football toss around the office.  Then we start with Jim and Dwight on their way to a sales call, which harkens back to one of our all-time favorite episodes, “Traveling Salesmen.”  Our favorite Jim moment from this season prior to this week came from “Counseling,” in which Jim volunteers to make Dwight over in the mold of Pretty Woman.  As much as we love Pam and Jim, we’ve already talked ad nauseam about how they’re often better separate than as the sum of their parts, so to see Jim paired with Dwight at the outset of the episode instantly gave it a leg up.  And, as much as we love Dwight and Jim as enemies, it’s even better to see them as frenemies, especially when they’re forced to be a sales tag-team.

And that tag-team soon became a three-headed monster, as Jim and Dwight called in Michael, “the big gun,” when they realized they were confronted with superstar rival paper salesman Timothy Olyphant…er, Danny Cordray.  Michael stopping the conference room meeting to take Jim’s call, probably because he thought Jim might want to get some ‘za, was another classic moment, as was Michael putting on his salesman hat.  But we should stop here and clarify that it’s not that the show was repeating itself, or playing it safe, it’s that they acknowledged what has historically clicked and worked within that paradigm.  All these things – Jim and Dwight as reluctant allies, a conference room session gone awry, Michael as a surprisingly competent salesman – are foundations of the show.  It’s not repetition in this case as much as it is staying true to the nature of the show and its past, which is something we’ve consistently felt that show has not done recently.  And then it even threw us a curveball; while Michael has often, against all odds, come through and saved the day with his innate salesman chops, he fails this time, even though he gave a professional, persuasive pitch.  There was just no stopping Danny Cordray and his immense charm (and smooth sales strategy).

But let’s pause here for a second and take a look back at Olyphant’s career defining work in Scream 2:

Anyway, while Michael, Dwight and Jim planned a sting operation to lure in Cordray and discover his tactics (via Dwight’s surveillance room), Andy was having a midlife crisis elsewhere in the building.  After reading in the Cornell alumni magazine that his former “Here Comes Treble” bandmate “Broccoli Rob” had recorded a milk awareness jingle with Phish’s Trey Anastasio (natch), Andy cannot help but be frustrated over his life path.  And this fit perfectly into what we have been discussing for two seasons on this blog now, that Andy has a bit of schizophrenia, hopping around from the Cornell preppy douche that we met in Stamford in season three to the lovesick doofus we’ve seen in later seasons.  Also, if he’s so talented, as we saw in “Andy’s Play,” what’s he really doing at Dunder Mifflin.  Well, we absolutely adore that they began to explore this conundrum with the Sweeney Todd production, and brought it even more to the forefront in this episode.  And we’re crossing our fingers that they continue to develop Andy’s uneasiness with his current lot as the season progresses, as it’ll be something emotionally real for the audience to relate to.  And while the way that Andy led the Sex Ex seminar last week caused us to surmise that perhaps he is being groomed to be Michael’s eventual replacement as season’s end, after this week we have to wonder if there are greener pastures ahead for him as well.  For Andy, Michael, Pam and Jim, there has to be life for them beyond Dunder Mifflin.

Some more things we loved about this episode:

– Andy’s discovery of Broccoli Rob’s success spurred him to start his own band, providing us with some more great Andy-Daryl moments, which, starting last week with Daryl’s pep talk, are fast becoming a favorite.  Another terrific odd couple to complement Jim and Dwight.

– Michael and Stanley’s tete-a-tete while they brainstormed ways to counter Cordray, followed by Phyllis’ rather creepy suggestion:

– Dwight’s impassioned, if somewhat backhanded, defense of Pam, and the fact that Pam was in a muted cardigan reminiscent of her secretary days.  We’ve also discussed Pam’s physical change in blog’s past, so it was nice to see that, for this week, they found a balance between old, plain Pam and new, pretty Pam.

– Michael’s firm of handling of the sales team after they objected to him hiring Cordray.  Michael at his decisive, if misguided, best.  But, to his credit, he does make a rather convincing argument.

– Michael’s realization that he already has a traveling salesman in Todd Packer, which we can only hope means we’ll see a Dave Koechner appearance soon (Christmas, maybe?).

We have to give a lot of credit Mindy Kaling, who in writing this episode clearly understood what can and has made this show great, and in doing so we scripted an episode that is nearly pitch perfect, with important contributions from nearly everyone at Dunder Mifflin (Toby, wherefore are thou Toby?).  We can only assume that she has been reading our recaps religiously and has taken our criticisms to heart.  So kudos, Mindy, kudos.  We return the favor by loyal following your tweets.

Alright, The Office, good work.  Now do it again.

One response to “No Clever Headlines, Just the Best ‘The Office’ in a While”