In Defense Of: Jimmy Fallon 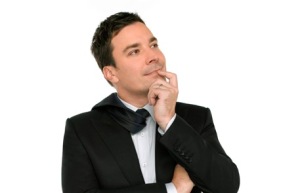 Jimmy Fallon has been doing a pretty okay job.

Now Fallon has gone on record as saying he doesn’t mind if he’s shifted back a half hour, since most of his viewers watch the show on DVR or online, and I believe him.  He seems to so genuinely enjoy hosting the show that he probably would do it at 1am or 3am or 3pm (of course, it’ll still be taped in the late afternoon so it’s not like it’ll make any real difference for his schedule).  But if Jimmy won’t say it, I will.  We’ve asserted many times here that Jimmy got off to a rough start.  That’s well documented and it’s no secret.  And while he’s still a work in progress behind the interview desk, he’s excelling in just about every other area.  And, well, that should be acknowledged.

Now, full disclosure:  I don’t watch Late Night on a regular basis.  I don’t watch it live, I don’t DVR it, and I don’t religiously view it online.  However, every time I do catch it on TV, or check it out on Hulu, or go over to the Late Night blog, I find something worth watching, something I’m surprised I haven’t seen quoted or forwarded or retweeted, from the attempted Saved by the Bell reunions to Kimbo Slice destroying fake furniture to “7th Floor West” to a visit from the Muppets.  And each time I’m impressed with what they’re doing over there in the old Dateline studio.  It’s like while America is sleeping Fallon, announcer Steve Higgins and head writer A.D. Miles run wild, carving out a unique niche in late night, often putting out sketches and bits that hold their own against the standard bearers for such material, SNL and Letterman.

And it’s not  just that Fallon is putting out quality sketches; as an SNL vet that was to be expected.  But with audience participation segments, playing games with guests, musical performances, utilizing The Roots (the best in the biz), Late Night also gets high marks.  To demonstrate the show’s progress (prowess?) I’ve chosen three clips, from three different areas in which Late Night has been killing it.

The first I stumbled upon flipping while through the channels when staying at a hotel a few weeks ago.  Deprived of my DVR, my choices were limited.  But I looked at the time and anxiously went over to NBC to check out Late Night and found a repeat of Fallon interviewing his former SNL castmate Fred Armisen.  Two SNL alums, clearly right up my alley.  But it was the next segment that was notable: Fallon brought out Armisen’s wife, Mad Men‘s Elisabeth Moss, and another former “not yet ready for primetime player” (who’s now ready for prime time), Amy Poehler, for a good old fashioned game of two on two charades.  It was the kind of fun, easy-going segment that might only be found on Fallon.  First, the expectations are low and limitations few, but even more than that, Fallon can draw on his friends for these kind of informal games and bits, and instead of it feeling like an exclusive celebrity club like Ocean’s Twelve, you feel like you’re in on the fun.  Jimmy Fallon doesn’t take himself too seriously, and neither do his guests, and then we’re all winners.

When I returned home I went to Hulu to find the charades clip and decided to just watch a couple minutes of another recent show.  And, again, it seems like whenever I give Fallon a chance he delivers.

Jimmy is probably the weakest interviewer among all the late night hosts, but in this interview with Joy Behar he shows how his weakness might also be a strength.  Fallon doesn’t always ask great questions, cracks up too often, and sometimes seems too much in awe of his guests.  But he also seems genuinely interested, and instead of always trying to make the joke, constantly inserting himself into the conversation, he can sit back and enjoy a story, like he does with Behar in this clip, as she recalls how she unbelievably almost ended up appearing on the first season of Saturday Night Live.

With “7th Floor West,” Late Night has shown that it can do digital shorts as well as the “Digital Shorts.”  But somehow I missed out on their follow-up, “The Real Housewives of Late Night,” a ridiculously good Real Housewives of New Jersey parody.  But unlike other Housewives parodies, Late Night ups the ante by having Fallon, Higgins, Miles, writer Bashir Salahuddin and Roots bassist Owen Biddle (the white one) don drag to play their own wives.  The commitment, the execution and the dancing are all top-notch.  It’s a wonder that they’re able to produce something so tight, complex and polished while also putting out a show every night.  If SNL is lucky they manage to put together something this good in a week.

And for good measure, let’s throw in a bonus audience bit.

Alright, I think this proves once and for all that Jimmy Fallon is the best late night host and he should be given the 11:35pm time slot.  Then Carson Daly at 12:35am, followed by Alan Thicke in the anchor leg at 1:35am.  Then maybe an infomercial for the magicjack.

Okay, maybe Jimmy’s not at that level yet.  But if he’s keeps this up I might have to start DVR’ing Late Night (I’d watch it live, but that time is usually reserved for watching Arrested Development on Hulu or reading about Van Halen on Wikipedia).

Filed under Good Humor, In defense of:, Muppets, Saturday Night Live, Saved by the Bell, Talkies

2 responses to “In Defense Of: Jimmy Fallon”