END_OF_DOCUMENT_TOKEN_TO_BE_REPLACED

Well kids, what started as a two to three day marathon has turned into a weeks long journey.  But we’ve finally reached the end of the Saved by the Bell line, “Graduation.”  With the benefit of time we know what eventually happens to the gang, but when we first saw this episode we didn’t know if Zack and Kelly would end up together or if this was it for them.  It was the end of their youth, and we like to think that for the actors, from Mark-Paul to Lark to Dustin, it felt like they were actually graduating.  It was truly a milestone moment for all of us.

Alright, let’s get to it.  Get your tissues ready.

What a face, eh?  The kind of visage you could set your clocks to.

Checking in With ‘SBTB’: S5

We’re 1/3 of the way through the fifth and final season of Saved by the Bell.  We’re having a real trouble stomaching the Tori episodes, more than we ever remembered, but we’re soldiering on.  Two more discs and our journey will be complete.

We’re also thinking about parting our hair the other way.  Thoughts?

We’re off and running on Season 4, which such classics as “Palm Springs Weekend,” “No Hope with Dope” and, of course, “Rockumentary.”  Should be, like, totally awesome!

Midway through Saved by the Bell Season 3, and midway through the “Wicked Stepbrother” two-parter, we pause for a quick progress report.

The main thing we’ve learned so far is that we look TERRIBLE on a FlipCam.  Or possibly all the time.

“The Last Dance:” Zack and Kelly Break-Up and We Were Never the Same

A special video update after “The Last Dance,” the episode in which Kelly cheats on Zack with that jerk Jeff and our world comes crashing down.  Not to get too Kevin Arnold on you, but when we first watched Zack and Kelly break-up a little bit of our childhood slipped away.

Two videos, after finishing up Season 2 and just before starting Season 3.  Sorry about  my face.  I’ve tried, but I can’t get it to stop looking that way.

And here’s the photoshopped image in question:

Filed under Saved by the Bell, We'll Get It In Post 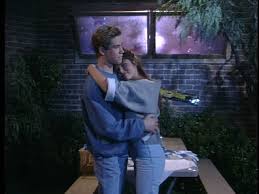 END_OF_DOCUMENT_TOKEN_TO_BE_REPLACED

After a short rest and some more snow shoveling we get back to work:

They Say It Never Snows In Southern California: A ‘SBTB’ Marathon Update

A 4am progress report.  Slowed, but not stopped, by some serious snow.

Tagged as Saved by the Bell Project, Snow