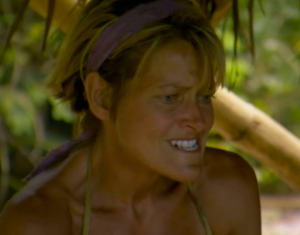 It’s our first week of the No Reynold Club on Survivor: Caramoan – 2 Legit 2 Quit, and the remaining members of the Edamame tribe are really starting to show the strain of the game. Eddie sees the writing on the wall, as the last remaining male fan and Uno Amigo he’s likely the next to go. Unless, of course, he can hook up with another girl, expose her to the Curse of Donkeylips, and watch her be sent off to Ponderosa. But would he hook up with an old chick like Sherri or a mom with a bottom retainer like Dawn? “Gross” he no doubt says to himself upon considering his options. Brenda? “Too into pig brains,” he likely reasons. So a reunion with Team Bro – Spring Break in Caramoan, y’all – is what Eddie expects to come shortly.

Cochran is also beginning to see the writing on the wall. Except this scribbling says that he now might be the biggest threat to win, that despite Erik’s abs and Eddie’s lips he’s the alpha male on the island, and as such the bullseye might now be on his back. Dawn, to her credit, hasn’t cried in a…oh, no, wait, here come the waterworks, never mind.

Erik, on the other hand, clearly hasn’t recovered from the diabetic shock he experienced after devouring those chocolate glaze donuts last week, and he’s beginning to hallucinate, stuck in some kind of vivid fever dream, a mysterious voyage. Or perhaps, to teach Erik a lesson about voluntarily bowing out of challenges, Jeff Probst laced the pastries with some peyote. Either way, he’s seeing things.

Under the influence of something, Erik contemplates ending it all. But his fellow Survivors talk him down, knowing they might need his vote down the line. Dawn, for one, is super thrilled when he makes it back to the ground safe and sound. But not cool of her to cop a feel in Erik’s weakened state.

At some point in every season of Survivor you need to ask yourself: what does Sprint have to say? Oddly enough, they say buy the new Sprint Evo LTE©. But, also, they have messages from loved ones. Brenda in particular is moved that her dad traveled four miles to see her. Eddie’s Dad, for the record, seems like a really cool dude. He’d fit right in with team bro.

But that’s not all! Not only have they flown these family members half-way around the world, but the Survivor producers have made the surprising decision to splurge and spend the extra zero dollars to bring the loved ones all the way one hundred yards to their left to participate in the Reward Challenge!

Even though the loved ones said explicitly in their messages that they are on the island, the Survivors are stunned to find out that Jeff has been hiding them in the bushes. Hard to believe, but Dawn hasn’t cried in like…oh, wait, there she goes.

And that was just for Eddie and his dad (Big Ed, or “Bed,” as his friends call him).  Check out how excited Dawn’s husband is to see her!

Dude looks like he was just ambushed by Chris Hansen.

Now this is a family that’s happy to see each other:

The loved ones Reward Challenge, a Survivor staple, is a really a no-win situation. Well, rather, sometimes it’s better to just not win. Judging by the way he leisurely saunters through the course with his lovely mother, it seems that Cochran understands this, and is not making any extra effort to earn the win. A victory, as Survivor history has shown, is not always a positive, as the winner is inevitably faced with a tough decision,  enjoy the reward with your loved one or give up your opportunity for a memorable, unforgettable bonding experience so another, perhaps more worthy player can partake in the reward. Or, more often, they must decide whose jury vote they want to buy, a choice which can often backfire. Sometimes it’s better to just sit back and let others make the tough calls. If only the Spring Evo LTE© could make the decision for them.

That responsibility falls to Brenda, who must choose between taking her adorable dad and Dawn and her terrified husband to the reward OR give up the reward and enable everyone else to enjoy the reward with TWO family members and a Spring Evo LTE©. Before Brenda left for Caramoan her father imparted the words of wisdom “Confucius say: be humble,” and she listens to this advice, sacrificing her experience for  the greater good. Somewhere Andrea is thinking to herself “looking back, I should have taken the pasta.”  Dawn, especially, is not happy with Brenda’s decision.

Let’s have Cochran lighten the mood with some classic Cochran charm, who is not only willing to poke fun at himself but at the whole Cochran clan.

No doubt Cochran snapped a few pics on the Sprint Evo LTE© of Big Coch working those weiners (yeah, we went there).

Back at camp, watching the others enjoy a nourishing, protein-rich meal with their closest family members only fifty yards away, Dawn has totally cooled down.

Yikes. Might we recommend another way of dealing with your rage?

Once Dawn breaks some more sticks with her bare hands and yells into a pillow and launches some uppercuts into some raw meat, she finally does manage to calm down and they all can head to the Immunity Challenge sponsored by the Sprint Evo LTE©, where Erik is surprised to learn that he had won the previous Immunity Challenge. But he returns the Immunity Necklace to Jeff and they begin a strength and endurance challenge that’s kind of like a reverse torture rack. Cochran, being so top-heavy with his jacked pecs and lats, is the first one out, leaving him vulnerable that night. Eddie, too, demonstrates yet again that the was the weakest of the Bros and drops out even with his survival in the game hanging in the balance. Dawn, on the other hand, appeared to conserve some of her rage and channel it all into this challenge, proving that she can tolerate even the most intense pain when she’s doing it for true love.

And Dawn gets her revenge on Brenda, holding on to win Immunity, her first ever! And, you have to give it to her, she doesn’t even cry or…oh, wait, nevermind. 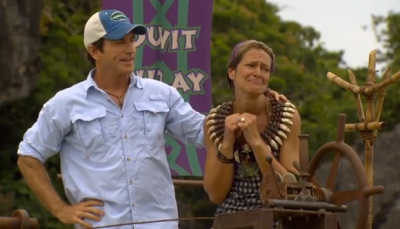 By giving up so early Eddie signed his own death warrant, right? Which is why Brenda is totally cool with Dawn winning. In fact, maybe too cool. And maybe oversharing.

Cochran, however, has other thoughts. That, perhaps, with Brenda currying so much favor with the jury with her magnanimous sacrifice, not to mention her athletic superiority, she’s the now the biggest threat and this might be the time to get rid of her. Again, it’s all about timing. Shockingly, Sherri is thinking the same thing (and, brilliantly, Cochran prompts her to say it first). After 35 days Sherri is finally channeling Sandra Bullock and promoting the Blind Side. But to our surprise Cochran shares this potential move with Dawn, a decision which we’ve seen time and time again can be the kiss of death. And Dawn would never betray Brenda, right? Not after Brenda saved Dawn by finding her retainer.

But would it be enough?

Yes. Yes it was. For Brenda no good deed goes unpunished, and she’s sent packing, betrayed by Dawn, her super good friend that she totally trusted and connected with and only a day earlier was consoling and preventing from committing Survivorcide. That’s cold, Dawn.

Perhaps that was payback. Brenda prevents Dawn from spending time with her husband (who, by the way, clearly supported Brenda’s decision), and Dawn stabs Brenda in the back. Survivor justice.

Brenda, of course, does not take the ouster well. The Glee has certainly left her face (recorded on the Spring Evo LTE©):

Which brings us to our penultimate A-B-C of the Week:

Brenda listened to her father’s advice to be humble and it might have cost her the game. Perhaps, if she had no been so generous, so selfless, then she’d still have a chance to win it all. Unfortunately, her kindness and humility just proved to everyone else that she’s too risky to bring to the end. Next time, enjoy your win. Might be the only chance you get.

There’s just one episode left and right now it feels like it’s Cochran’s game to lose. Which means his biggest test is yet to come. If Erik, Sherri and Eddie decide to band up, two fans and a miscast favorite, there might still be a couple twists and turns left in the game. 2 Legit 2 Quit.