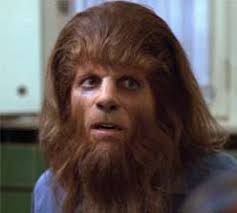 The Quickfire challenge pits the remaining cheftestants – Blais*, Mike, Tiffany, Antonia and Carla – against the Top Chef from their respective seasons.  Which gives us another chance to say, “Oh, yeah, Hosea won the Brooklyn season.  That reminds me, where’s Stefan?” and “Wait, that guy won last season?  What’s his name?  Really?  Angelo lost to that guy?”  It also afforded us another opportunity to think to ourselves “Boy, Mike Voltaggio was far and away the best Mike on his season, and maybe the best Top Chef ever, and even Mike Isabella knows it, and he’s just happy to clean Volt’s knives.”  Memories!  History!  And, as often happens, history repeats itself, as the outdoor burners don’t work.  Do the outdoors burners ever work?  Nope.  They should call this show Top Chefs with Outdoor Burners That Don’t Work.  Meanwhile, Carla knows she made terrible rice.  She like, “I know I made terrible rice.”  So what does she do?  She serves her terrible rice.  And Padma and Tom are like “this rice is terrible.  Carla, did you know this rice is terrible?”  And Carla’s like “Yes, I know, I made terrible rice.”  Good job, Carla!

But since this was a head-to-head challenge there’s really no winner here, especially since it reminded us that Hosea and Kevin won their seasons .  And somehow Mike Isabella beats Voltaggio.  WHAT?  Even Isabella knows that’s fucked up.  The only explanation is that Voltaggio refused to play it safe and put together some unique flavor profile that Tom and Padma aren’t ready for.  But future generations will no doubt petition the courts to overturn this ruling.

For the elimination challenge the cheftestants are told they’re going to be cooking for royalty.  So Antonia immediately starts thinking to herself “what kind of food would Colin Firth like?  Or Gwyneth Paltrow?”  But the cheftestants arrive at a Bahamian restaurant to finish their dishes and PSYCHE!  It’s not fancy, stuffy, upper-class, civilized royalty, but local island festival royalty.  You know, lesser royalty.  Antonia takes one look and is like “Fuuuuuuuck.”

Panicked, Antonia quickly decides to sabotage the challenge by breaking the fryer, warning that the whole thing was in danger of going up in flames.

And, right on time, the flames erupt.  But it gets a little out of hand.

And pretty soon a PA is like EVERYONE GET DOWN AND GET OUT!

After the whole fire department arrives on scene, totally ruining the festival, Collicchio surveys the scene and declares the food ineligible.  So Antonia gets her wish and is be able to prepare a different meal for the lower class, for much less refined pallets.  And Professor Ricky Blais (or should we say Professor Chaos) encourages her to do so, knowing that she’s more liable to make an error if she cooks against her gut.

So after a couple of hours or a few days they head back into to kitchen (either way, they haven’t slept, while Tom and Pamda no doubt spend the whole time napping and getting massages with lanolin lotion).  Antonia prepares her new dish, shrimp and grits (something for the average Joe fake royalty), while Tiffany is upset because she thought she had the best dish before.  Because it’s not about who has the best food, it’s about who chose the dish that will most pander to the diners.  STOP IT, Tiffany.  Just cook good food.  Carla, meanwhile, once again with the pressure at its most intense, chooses a cooking method she doesn’t’ know.  Must be finale time!  And how does her pork tenderloin turn out?  Raw, of course.  She might as well have made Risotto.*  Carla, you might as well have made risotto!

At judges table Mike is once again named the winner (WHAT?!  He’s just as shocked as the rest of us), but Blais is also safe (relax, Blais!).  Tiffany’s food was boring and confused, Carla’s pork was undercooked and her apple chips were limp, and Antonia’s shrimp was underwhelming and muddled.  And Antonia admits she wasn’t proud of her dish.  And admits that she changed her dish to one more appropriate for poor, primitive people.  Just terrible, Antonia!  Terrible.  We expected more from you.

CARLA YOU ARE THE WEAKEST LINK WE GET IT YOU ARE A CATERER AND YOU USED TO MODEL AND YOU’RE FROM THE SOUTH AND  YOU ALWAYS STRUGGLE TO GET YOUR FOOD DONE IN TIME BUT IT USUALLY TURNS OUT GREAT BUT NOT THIS TIME AND WE HOPE WE NEVER HAVE TO HEAR “HOOTIE HOO” AGAIN YOU LOOK LIKE A BIRD THAT’S MEAN BUT IT’S TRUE PLEASE PACK YOUR KNIVES AND GO GOODBYE.

So now we’re down to the Final Four with hour two of the 32-part finale debuting in just a couple of hours.  C’mon, Blais!  Just keep it together!

*We realized we’ve been adding a non-existent “e” to the end of “Blais” this whole season.  We apologize to you for the error, and, most importantly, we apologize to The Blais.

**We’d be remiss not to note that Antonia actually made a successful risotto two episodes ago for the family-inspired challenge.  Great job, Antonia.  Way to prove us wrong.  We wonder if that means the Zapatera tribe made the right decision in throwing a challenge two weeks ago on Survivor.  If so, we’ll be the first to say that they “Antonia’d it.”