Kieran’s Korner In Memorium: A Eulogy For the Compact Disc (And the Worst It Had to Offer)

Jumped the Snark presents, with pleasure, the latest thoughts from Mr. Kieran Walsh: 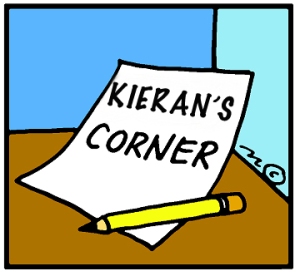 They were shiny.   They were round.  After breaking the dorm room mirror I used one to comb my hair for an entire semester of college (true!)

And, now, suffice to say, they’re pretty much dead.

I’m referring, of course, to the Compact Disc.

Oh, you can still find them.  Most of the big music stores are closed, of course.  No more Tower Records.  Alas, Sam Goody.  Whither Virgin…

Yes, strictly speaking, CDs are still out there and, as long as what little I understand of economics still holds true in our increasingly bizarre post-TARP universe, they should be for a while.

But in terms of the popular imagination—in terms of being the de facto medium for pre-recorded music—the Compact Disc is history.

The first time I ever encountered the Compact Disc was in a 1983 Sears Wish Book.

God, even typing that seems archaic!  For those of you who simply won’t understand otherwise, once upon a time, before the Internet had revolutionized shopping, there were these things called catalogs.

They were bloated, grubby (the newsprint would get all over your fingers) and astoundingly flimsy (a strong breeze was more than enough to tear a page down the middle) but, at the time, they were the only way to participate in the joys of capitalism without actually going through the trouble of leaving the house.

Sears was the unabashed colossus of the holiday catalog arena.  Kids everywhere looked forward to the autumnal delivery of the Sears Wish Book so that they could spend the next several weeks poring over the pages, making crucial decisions about what they wanted Santa to bring them that year.  It was during one such fact-finding mission that I discovered the first commercially available Compact Disc player selling for the low, low price of… $589. 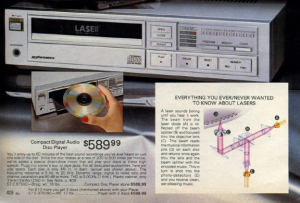 According to MeasuringWorth.com, this was equal to about $1,800 in today’s money.  In other words, it was dauntingly expensive.  Heck, even the first iPods didn’t cost that much.  Not the greatest business model, in retrospect.  But I guess that’s why the tech industry relies on the so-called early adopters.

Was I interested?  Somewhat.  The thing that really caught my attention was the fact that this new gizmo somehow involved a laser. Cool!  Just like the guns in Star Wars, right?  I was deeply disappointed when my mom told me that you wouldn’t be able to see the laser because it was inside the player.  GAH!  I mean, what’s the point?  And, I wouldn’t swear to it, but I’m reasonably certain she added something along the lines of “It’s just a gimmick.”

So, ultimately, it didn’t impress me much.  In other words, it wasn’t quite like the unbridled enthusiasm depicted in Adam Sandler’s nostalgic The Wedding Singer.  “It’s a CD player…  It plays CDs!” No.  In fact, there was more than a little trepidation. I can still recall one classmate of mine—a girl—incredulously stating:  “I don’t get it.  They’re just little records!”  That’s pretty much how everyone in my age bracket felt at the time.

Flash forward to 1984 for another key memory, the birthday party of a close friend.  His grandparents gave him what seemed like a particularly extravagant gift, a portable Sony Discman.  The only trouble was, at the time there wasn’t much of anything available to listen to on CD apart from classical music and, naturally, we all wanted Twisted Sister.  Beethoven?  No thanks!  I was still several years away from digesting, courtesy of Kubrick’s A Clockwork Orange, the sheer majesty of the Ninth Symphony.

And yet, despite these obstacles, the Compact Disc player stuck around, conducting a war of attrition against the LP and the cassette.  Prices fell incrementally, perceptions changed, and the advantages of the new medium slowly became apparent.  Arguably, though, the real boondoggle came in 1987 with the crucial release of—you guessed it—the Beatles on Compact Disc.  After that I wanted me a Compact Disc player.  Everyone did.  Content is king.

Witness how history repeats itself.  The November 2010 release of the coveted Beatles oeuvre on iTunes made things very clear.  Sorry, CDs, but the younger generation have spoken (texted?) and they’re just not that into you.

For my part, I used to have a collection of about 500 CDs.  I say “used to” because I’ve recently embarked on a long-term project to copy, in full quality, the entire collection to my computer and then give away the actual discs to charity shops.   There were several motivating factors, but it’s mainly a space-saving initiative.  When you live in a New York City studio apartment, every little bit counts!

Not every CD will be eliminated.  I’m keeping the ones from the big cheese artists (The Smiths, Floyd, Prince) but I’ll be disposing of ones from lesser—much lesser—lights (Right Said Fred, Jesus Jones, and, ouch… Lou Bega.)

My first drop-off at Housing Works took place immediately after Christmas.  Just out of curiosity, I decided to take a look at their CD collection and see what they had to offer.  I didn’t expect to find very much, but there was a pretty extensive selection.  I was so amused by some of the titles I found, in fact, that I ended up on a mini-window shopping spree—Breakfast at Tiffany’s style—in most of the charity shops located on 23rd Street.  Damn if the same titles didn’t keep turning up!

So, without further ado and in no particular order, here are The Top Ten Used CDs I found available in the charity shops on 23rd Street (eat your heart out, Letterman writers!)   And, by the way, just to be clear, there was nothing even remotely scientific about this.

I actually saw these guys a long time ago at an Irving Plaza show headlined by celebrated comedian/walking disaster Andy Dick.  I didn’t walk away convinced that I’d seen the next big thing, but I found them pretty entertaining and they certainly seemed to believe in the teenage dream, so good on them.  Nice mid-sixties flavored cover art, too.  Actually, I might have to pick up a copy.

I gather the nineties were a good time to be a girl singer-songwriter.  Or was it bad?  I suppose it could’ve gone either way because there was an incredible surfeit of them, to the point where it got a little confusing.  Alanis stood out because, well, she was nude in that video.  But the Lisa Loebs and Lauren Christys and, yes, Jewels, all seemed to merge into one.  I think I kinda remember the hit song from this album, but only because of the Howard Stern parody that included the lyric, “the key to a… hit song… is to put on a thong.” As always, it’s difficult to argue with Howard.

And you thought that Whitney Houston song from The Bodyguard got overplayed?  Holy shit!

No single record so perfectly encapsulates the insidious banality of the hair metal movement.  Sure, they looked badass.  But, deep down, they just wanted to be loved, and that’s why I was perfectly happy to stick with Pink Floyd and the Smiths.  The godawful monster hit single “More Than Words” made their soft-rock ambitions painfully clear.  This, friends, is why we so desperately needed Nirvana to show up when they did.

6.  Bonham – The Disregard of Timekeeping

Weird.  I can only imagine that the frequency with which this compilation appeared is due to the fact that, even in the mid-nineties, people of my generation were feeling nostalgic for the eighties.  Go figure.  To be fair, the eighties were chock full of catchy, disposable pop, so I guess it kind of makes sense.  Why this particular year though?  1984 was a good year, as was 1982.  Hmmm….

4.  The Cranberries – To the Faithful Departed

His story is now such an obvious analog for the dangers of success and excess that I don’t really want to pick on the guy.  He’s been through a lot.  Still, how could anyone have thought that this would be huge?  Blurgh.

I have no idea what this is.

In college, I spent more than a few inebriated nights lying awake and wondering, “What if Little Miss is wrong?  What THEN?” Fortunately, we never found out.  Or, perhaps we did and we didn’t even notice?  Hard to say and probably not important.  Anywho, these guys were immensely, ridiculously popular in the early nineties.

The ramifications of all this are still murky, but it’s obvious that we’re dealing with a number of different—and probably seismic—issues, including the dire need for the music industry to reinvent itself, the death of retail, and the increasingly attractive possibility of living in an all-streaming, all-the-time world.  Just last month, in fact, the mammoth Sony corporation announced that it would be shutting down a major CD-manufacturing plant in New Jersey. Sounds pretty definitive to me.

The future for the Compact Disc is obvious.  From here on it’s just a slow, humiliating descent into the shadowy cobwebs of obsolescence.  It’s cold comfort, but, at the very least, they’ll have a lot of company on the slagheap of history.  Anyone remember the MiniDisc?

I didn’t think so.

Still haven’t got it?  Okay, I didn’t want to do this, but I’m going to have to borrow/mangle a quote from the most esteemed source I know…

“The Compact Disc is no more! It has ceased to be! It’s expired and gone to meet its maker!  The CD has shuffled off its mortal coil, run down the curtain and joined the bleedin’ choir invisible!!!”

One response to “Kieran’s Korner In Memorium: A Eulogy For the Compact Disc (And the Worst It Had to Offer)”