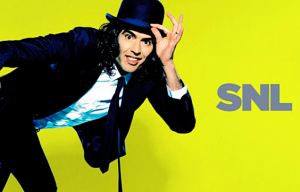 Well, we had little hope that the SNL would rebound from its disillusioning Dana Carvey episode last week.  For some reason, lately we’ve been giving the show the reverse of the benefit of the doubt, the doubt of the benefit if you will.  And when we casually started the episode late Saturday night, it seemed that our prognostications would be proven valid, that we were in for another ho-hum effort with a perfectly fine but completely ordinary host.  But, while Russell Brand would prove to possibly be the weakest part of the show, the episode turned around on the basis of two sketches, two pieces that will no doubt sit atop our best of the season list.

First, just as we were ready to call it quits after another dreadful “Surprise Giveaway” sketch (retire it already!  Before you ruin Kristen Wiig’s film career), the show presented once of its best film trailer parodies in some time.  A sketch so good, so pitch-perfect, that we immediately rewound it and watched it again (and then again in the morning (and later that night)).

The best comedy comes from starting serious, with a real, believable premise.  This is a great example of that.  Really, our only complaint is that it didn’t need that twist button at the end with Nasim Pedrad asking “What?”  To us, that’s another SNL tendency to push the joke a little too far, being too self-aware, and then by doing so somewhat puncturing the world set up by the parody.  It’s absolutely fine to include those quotes from critics noting the unintelligible speech, but, to us, that’s a separate device, one that doesn’t contradict the reality of the sketch.  But it got a big laugh, so what do we know?  And, maybe surprisingly, maybe unsurprisingly, Russell Brand seemed to present the least convincing British accent, pushing it a bit too far over-the-top (something we’ll see again later in the show).  But that’s nitpicking on what we thought was a remarkable, gorgeous piece of work.

So Don’ You Go Rounin’ Roun to Re Ro persuaded us to stay with the show until “Update,” and that turned out to be a great decision.  Let’s just call off the race for the 2010-2011 season MVP right now and hand the trophy to Stefon.  It’s dangerous to keep going back to the same character, and a crutch we’ve often criticized, but somehow they manage to make Stefon work every time, and somehow improve the sketch, revealing more and more about Stefon’s personality, peeling back the layers of the Stefon onion.  Initially, it was just a roll call of silly names and bizarre, fringe types of people.  But now it’s becoming more about this weird guy, who has won us over with his charm.  At this point, we’re eager to see them take Stefon out from behind the Update desk.  Initially, we would have labeled Stefon is a one-note character, but he’s gone ahead and changed our mind (great question raised by a friend: does Bill Hader see the script beforehand, or is he seeing these lines for the first time on the cue cards?  Because often it seems like he begins to break when he spies what’s next, as if he’s surprised by it.  Which, if that’s true, is pretty genius).

The rest of the show didn’t reach the level of brilliance of those two sketches, but there still were quite a few moments we enjoyed.  They made sure to play to Brand’s strengths, which meant writing sketches about British people, so it felt a little narrow and repetitive (and obvious), but many parts  worked.  Our gut reaction when this “‘A Spot of Tea” sketch started was “next!,” but it quickly won us over.  As much as we admire a sketch that plays it as real as possible this was an instance of something ridiculous being too much fun not to like.  However, once again, it was interesting that Brand’s regal accent seemed to be weak link.  with another particularly strong showing from Bill Hader.

And we liked this sketch about George Washington being brought to the present to once and for all settle Washington’s debate about what our forefathers would do about the nation’s current problems.  To be fair, there was a lot more they could, and should, have done with this sketch considering it had such a rich premise to work from, instead favoring slapstick violence over some more cerebral observations, and it felt a bit stunted.  But for a last sketch of the night sketch, it worked.  And, most importantly, it offered the first appearance of Jason Sudeikis since the cold open (which was pretty good too), which he obviously made the absolute most of.

Even this “Royal Taster” sketch, which we initially dismissed after having been somewhat deterred by Brand’s interminable (or so it felt) monologue, was an improvement over many of the post-monologue sketches this season (even if it a part of it felt cribbed from a classic The State sketch).  And, once again, Hader stood head and shoulders above the rest (even if it appears that Brand may have an inch on him).

So, on the whole, we liked the episode.  Maybe we went the opposite way this time, maybe we were too easy on it, because we felt guilty after not really giving it a chance off the bat.  To be fair, we didn’t care for this sketch at all, so it wasn’t all roses.  But after the previous week, which was emotionally draining and personally challenging, we welcomed a few light laughs, and we got them this week.  Not so much because of Brand, who didn’t add much besides inspiring the writers to pen a few English-tinged sketches, but because they had some fun.  And it was the kind of fun that was inclusive.

Two weeks off now and then SNL show returns with Miley Cyrus.  Burning question: does Miley confront her impersonator Vanessa Bayer on “The Miley Cyrus Show” or does she appear in that sketch as another underage pop-tart, say Selena Gomez.  Our money is on the latter.

Oh, and Russell Brand, we get it, you get to have sex with Katy Perry.  You don’t need to remind us.

WHO ARE THESE PEOPLE AND WHAT HAVE THEY DONE WITH THE CAST???

Filed under Across the pond, Analysis, Good Humor, Saturday Night Live, The State