‘The Office’: Truth or Consequences

As we’re a bit late to the party, just some (hopefully) quick thoughts on last week’s Office entry, “Shareholder Meeting.”

The theme for this season (and probably the entire series), as we have already talked about in great detail, has been the vacillation of Michael Scott from mildly idiotic but well-meaning and somewhat competent to completely oblivious, self-absorbed and wildly unqualified, and finding that the best episodes seem to be when Michael trends towards the former.  Indeed, in their review Vulture notes that, “as a general rule, the less Michael Scott is a Homer Simpson–esque boob, the better The Office becomes.”  In “Shareholder Meeting,” we get a glimpse of both Michaels, and I think this episode just missed the mark, not because Michael again veered of course (although, he sorta did), but because the show shied away from the opportunity to let things get even uglier.

As we remarked last week The Office has always been a balance between light, broad episodes and darker, more uncomfortable episodes that evoke the show’s UK forebearer.  The episode that typifies the latter category is season 4’s “The Deposition.” In our list of the top five least awesome Office episodes, we found that the majority of the countdown belong to the first half of show’s 4th season, which probably represents the weakest part of the series’ entire run.  The problem with these episodes, like “Survior Man” and “Branch Wars,” is that they are far too silly, and as the silliness aggregated it became harder to tolerate.  It was “The Deposition” that turned the season around, that gave us confidence in a resurgence as the show headed into the unfortunate and prolonged writers’ strike.  The episode is probably the most uncomfortable to watch as Michael is interrogated by the company he has devoted his life to, and is basically betrayed by the woman he loves.  It’s a kind of watch through your fingers moment as we see Michael squirm, first oblivious to the connotations of his answers, then confused by his transgression, and finally cognizant of Jan’s treachery.  Like with the seemingly unending silence between Jim and Pam on the booze cruise, this episode, and specifically its conclusion, again demonstrated how The Office can do drama as well at it does comedy, which means that it can do drama very, very well.  And episodes like “The Deposition” are critical to serve as the counterweight to the Scranton HQ antics that normally dominate the plot.

Which is all a long way of saying that it seemed like “Shareholder Meeting” could have and should have reached for the inconvenient truths of “The Deposition,” but instead it got near the sun but didn’t have the courage to get close enough to burn its wings (which, in this metaphor, would be a good thing).  In this episode we do have Michael being humiliated and used by Dunder Mifflin, as they carry him by limo to the shareholder meeting in NY where they intend to trot him out in front of the crowd, at best as a spokesmodel, at worst as the first line of defense (perhaps putting him on the front line because he’s expendable).  As we learned that Michael was not going to be feted like he thought, that he was just a pawn in a very poorly executed Dunder Mifflin chess game, it felt like the show would keep peeling back the layers of truth, until Michael completely saw the situation for what it was.  He did come to understand that DM sent him the limo to keep him in their pocket, but at the end, when Michael leaves early with Dwight, Andy and Oscar in tow, running back to the limo before the bigwigs could revoke the return trip, it’s not quite clear if he fully comprehends the weight of the situation, if he realizes how lucky he was to escape, and where this story is eventually headed.  Exalting over a stolen bottle of booze, perhaps it was just a carpe diem attitude, a “let’s enjoy this while we can” mentality, a brief respite from the awful truth of the situation.  But, as they sipped swiped liquor like high school kids from TV shows on their way to the prom, you got the feeling that Michael didn’t entirely get it.  In a season that has been full of frivolity, this was a moment that might have utilized a bout of stark reality (the closing shot of the ticker displaying the falling Dunder Mifflin stock value excluded, which was a lovely final touch). 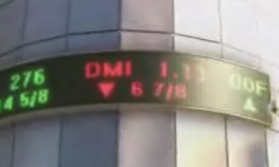 While avoiding the truth, the show also seemed to avoid the consequences of Michael’s actions.  Time and time again Michael has humiliated himself (although, usually unbeknownst to him), his friends (see: rehearsal dinner toast in “Niagara”) and his company (see: “Company Picnic”).  Yet, in regards to his blunders with Dunder Mifflin he’s always managed to escape unscathed (he quit the company only have his own start-up bought by DM), ostensibly saved by his branch’s inexplicable sales record and, no doubt, his record of loyalty (the Michael Paper Scott Paper Company not included).  However, this time, as he went off book and outed the DM brain trust for sending him a limo, and then promised the bloodthirsty crowd a 45 point plan that would restore the company to solvency in 45 days, one had to wonder if he had finally gone too far.  First he inadvertently proves that the heads of DM are greedy fat cats, and then, basking in the glow of the crowd, blindly guarantees a rescue operation without any actual ideas about how to save the company.  Clearly, these transgressions, especially in the presence of the CEO would prompt some kind of response greater than the loss of limo privileges.  Michael has skated by with David Wallace before, and even though, as Alan Sepinwall postulates in his review that Wallace is “clearly not remotely as smart as he the other characters want to think he is,” it would seem that Michael would finally get in trouble this time, at the very least because someone would need to take the fall (afterall, wasn’t that what he was there for all along?).  No one wants to see Michael get fired, but there have to be limits to his recklessness, and if he does play with fire he has to get burned.  If we, as an audience, are to believe in the severity of the DM financial crisis, then that degree of authenticity needs to stretch to other aspects of the show.  Now, we just saw the immediate aftermath of Michael’s accidental sabotage, and while it seems all he received was a tongue lashing, perhaps next week we’ll discover the true repercussions of his behavior.  However, for now, our last image of Michael is one of celebration. 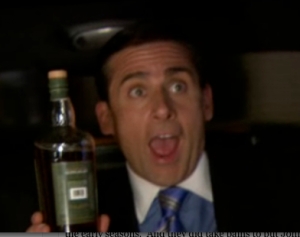 The b-story, Jim trying to assert his authority over the Scranton staff, was more successful at following up with appropriate consequences.  For weeks we’ve been watching Ryan’s descent into greater and greater douchebaggery, and it seemed that it was spiralling out of control.  Indeed, when dealing with Michael, Ryan sees no consequences to his actions as Michael’s man crush on him is well documented (a winner of the Dundy for “Best Looking”).  The only positive of result of Ryan’s devil-may-care attitude is that he openly questions Michael hyperbolic and ridiculous statements (as when Michael said he could write a book about business and Ryan, exasperated and almost daringly, emphatically tells Michael to “do it”).  However, since Jim returned from Stamford, and escalating when Ryan won the job with Dunder Mifflin corporate, the former temp has shown little, if any, respect for Jim.  That might have been okay when Jim was a salesman, but now that he’s a co-manager, he cannot be undermined like that.  As a former supervisor of peers, I know how hard it can be to gain respect from people whom are the same age as you and whom you consider friends.  The difference between Michael and Jim, and we’ll see how this all 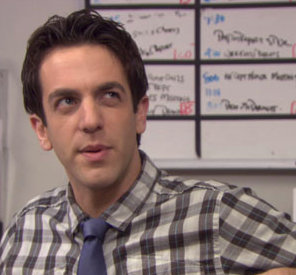 plays out, is that (at least for now) Jim wants to be a boss first and a friend second, and Michael, famously, believes in the opposite (and a close third, of course, is entertainer, an ambition that was only more obvious after this episode).  And as Ryan continued to ignore and mock Jim’s power, Jim could either let it go and keep his friends, or assert his authority and gain employees.  In the end, Jim assigns Ryan to his own personal office inside a dank supply closet.  It was good to see Jim gain the victory this time.  It would have been easy to have him try and demonstrate his power only to have it backfire, inspire a mutiny (like in “Survivor Man” when he tried to combine all the birthdays into one party).  He still might grow to regret his decision, but for now it was a welcome win.  You do the crime, you do the time.

– Would have liked to see Oscar step up and deliver his plan for DM’s recovery after Michael brought him in front of the board.  The greater truth might be that when faced with his superiors Oscar was too afraid to speak up, that his survival instinct kicked in and he declined to enumerate the criticisms that he had so easily relayed to Michael and Andy earlier.  However, not sure what he had to lose in offering some ideas.  He seems to be resigned to the fact that bankruptcy is unavoidable under the current direction, so if he’s going to lose his job he might as well go down fighting.  Then again, to have Oscar magically come in and save the company would have been a tough pill to swallow, especially so soon into this arc.

– Going to grant a pass to the Green Week-inspired cold opening featuring “Recyclops.” It was amusing, and a nice trip down memory lane, but again a little over the top, especially Recyclops’ berserk rampage.  After Dwight beat himself up in last week’s cold opening, this one also seemed a little repetitive.  As Jim has advanced to management his pranks on Dwight seem to have ceased, or at least become less frequent, so it seems that now Dwight has to humiliate himself instead.  But, as the writers were forced to put in something of “green” relevance this week, we won’t get too upset about this.

– As we ran down the history of Recyclops we got to see year by year glimpse of the reception desk, and the brief return of Ronni, Pam’s replacement who we saw in “Weight Loss.”  However, it seems that she was placed out-of-order, as in the montage she came after Ryan, but in the continuity of show Ryan replaced Ronni after he was rehired by Michael (following his termination at Dunder Mifflin Corporate).  Perhaps in year two of the Recyclops saga Ryan the temp was just filling in for Pam at the reception desk (although it seems that he has the shorter hair of Ryan the douchebag, not the more floppy style of the early seasons.  And they did take pains to put John Krasinksi in an appropriate season 1 Jim mop top wig, so it’s curious).  See the whole Recyclops epic here:

– Also, since we see Creed hanging around Ronni, are we to assume they had their own Jim and Pam-esque office romance?  Sure hope so!

So much for quick thoughts!  Well, off to consolidate all of our rolodex information into Outlook.

Filed under Dunder Mifflin, this is Pam, Good Humor, Must See TV

3 responses to “‘The Office’: Truth or Consequences”