The Edge is Really Serious About Being The Edge 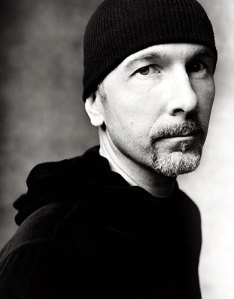 This past week’s Entertainment Weekly included a Q&A with U2’s The Edge about the new documentary It Might Get Loud, in which he appears with Jack Black and Jimmy Page. When asked if he has a favorite White Stripes song he responds,

“…I wrote this sketch of a song, which I was really excited about. I went over to my brother’s house and told him, ‘Dik, I gotta play you this new tune!’ After about 16 bars he says, ‘Edge, that is ‘Seven Nation Army.’ I said, ‘What? Get out of here. Is not!’ I went back and listened, and it wasn’t exactly, but it was way too close. I played it for Jack, and he was like, ‘Mmm, it’s a bit close, isn’t it?'”

Okay, so The Edge wrote a “Seven Nation Army” ripoff, no big deal.  But more importantly, The Edge makes his brother call him, “Edge?!”  You’d think between brothers “David” or “Dave” would be fine.  But I guess not.  Not only that, but The Edge gets to be The Edge while his brother remains “Dik.” Doesn’t seem fair.

I wonder what Bono’s brother Sheldon* calls his bro.

***And according to Wikipedia Bono’s family has been referring to him as his stage name since adolescence.  Well, there you have it.

Tagged as it might get loud, the edge, u2