Leaving Through the Backdoor

Backdoor pilots have always been a  common way to launch new television series. Sometimes they work, most of the time they don’t. Which was the case with The Farm, NBC’s failed attempt to spin-off The Office into a new Dwight-centric, cubicle-free series (they might have been better served spinning-off The Office’s faux-documentary style, as they did with Parks and Recreation to phenomenal results). In honor of The Farm’s brief existence,  airing as a regular Office episode last night, we thought we’d take a minute to acknowledge our favorite backdoor pilot, Top of the Heap, which aired during Married with Children’s fifth season and starred a young, pre-Joey Matt LeBlanc (and, of course, the immortal Joseph Bologna). However, unlike The Farm, Top of the Heap was actually picked up, but only for a very brief, six-episode season. A failure still, but a more modest one.

Groaning Pains: Matthew Perry Goes On to a Better Place; Or How We Learned About Drunk Driving 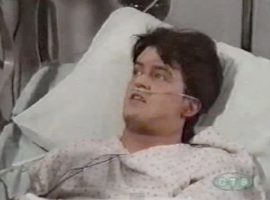 With the proper premiere of Go On this week and its promising ratings, it seemed like the appropriate time to revisit our Groaning Pains series, specifically Go On star Matthew Perry’s short stint as Carol’s ill-fated boyfriend, Sandy. In other words, it’s time to discuss how we learned about drunk driving (and that a guy could be named “Sandy”).

When Friends premiered back in 1994 we may have been the only eleven-year-old in the country who thought to himself “there’s the guy who was in the Married with Children backdoor pilot and there’s the guy who was Carol’s boyfriend on Growing Pains that died from drinking and driving.” The former is Matt LeBlanc, whose Married With Children character Vinnie Verducci – Joey Tribbiani’s spiritual predecessor – was spun off with his father Charlie  (the immortal Joseph Bolonga) into the very short-lived series Top of the Heap, and the latter is, of course, Matthew Perry. For years, Matthew Perry stuck in our mind because of his role on Growing Pains – 1) because his arc ended so tragically, and 2) because we never could quite wrap our heads around the fact he was named Sandy – and it would take a little while for us before we thought of Perry as Chandler Bing and not as Carol Seaver’s love lost, a cautionary tale.