‘Suvivor: Cagayan’ Premiere – A Funny Thing Happened on the Way to the Open Forum

Survivor is back! And, from the looks of it, Jeff Probst is in no mood. It’s been quite some time since we were offered an all-rookie season of Survivor, and after three great seasons back-to-back-to-back, it would not have been surprising to see the show go to the returning player-well once again (indeed, ever since the fireworks of Russell vs. Boston Rob: Round 1 in Heroes vs. Villains, it seemed like  all-newbie seasons might be few and far between). But, perhaps in an effort not to exhaust Survivor of its most precious Cochran and Reynolds and Aras natural resources, the show is going au naturale in its twenty-eighth(!) season.

Which isn’t to say that there are no unique wrinkles this time around. As the show has been teasing since the Blood vs. Water reunion, Survivor: Cagayanandonandon separates the players into the three tribes: Beauty, Brawn, and Brians (a group which, surprisingly, features not a single Brian). And Jeff gets things going right away, asking each tribe to quickly and essentially without deliberation pick a team leader, and then Jeff directs that specified leader to immediately identify his or her tribe’s weakest link. So, for the newly anointed team captains, this is (seemingly) a big opportunity to shed either the tribe’s weakest player or the group’s biggest threat. Sarah, on the Lloyd Braun tribe decides to single out  Trish, reasoning by her emaciated looks that she’s just finished up playing at least two Survivor games back-to-back and probably is just a tad fatigued from 78 straight days without proper nourishment. Over on the We’re Also Beautiful on the Inside Tribe, LL Cool LJ tabs former NFL Cheerleader Morgan, labeling her as “hot,” which makes her more dangerous than her “cute” tribemates. Dude’s got a good system. Watch out for that guy. Not-Brian leader of the Brians David wastes no time in selecting Garrett, the marble statue to his left. David clearly saw some muscles on Garrett that he didn’t know even existed, and deduced that he’s too serious of a threat to help the tribe win a challenge and must go. These three players, YOU ARE THE WEAKEST LINK, GOODBYE!

Of course, Jeff quickly explains that these three outcasts will not be eliminated from the game, but will instead get a head start on setting up camp (and, they soon find out, will have the option of securing another bag of rice for their tribe or receiving a clue to the already hidden Immunity Idol. Talk about a real Sophie’s Choice). Say goodbye to your tribe and get to the choppa!

THE GAME IS AFOOT.

[We explained in great (i.e. far too much) detail several seasons ago why we hate former MLBer and Survivor: Philippines competitor Jeff Kent, but let us take a few moments to convey why we feel similarly about David Samson, President of both the Brians and the Miami Marlins baseball club. The Marlins, while probably a lovely, reasonable fish, are the most duplicitous, reprehensible organization in major league baseball, a franchise that has twice dismantled their team after wining the World Series. As a diehard, committed, beaten-down time and time again Mets fan, we would have given so much for a World Series during that time, so it was particularly disheartening and devastating to see a team that treats its fans and players so callously win not one but two World Series since the Mets last climbed the hill in 1986. However, the biggest iniquity committed by the Marlins, and why they are truly repugnant, is that they bilked their fans and the people of Miami into funding a new baseball stadium, conning them into believing that the organization was committed to putting a winning team on that tax-payer funded-field, only to sell off high-price players like Jose Reyes, Josh Johnson, and Hanley Ramirez, among others, following a disappointing inaugural season in Marlins Park, essentially leaving a skeleton crew of not-yet-ready-rookies, just barely hanging on veterans, and fringe AAAA players, a level of talent not worthy of the billion dollar ballpark that was unveiled merely a year earlier (the fact that the stadium is an unsightly, gaudy monstrosity notwithstanding). The president of the Marlins during that time? You guessed it, David Samson. So, although we’re not Marlins fans, we still feel bad that they had the wool pulled over their eyes, and while we came to respect and maybe even grow fond of Jeff Kent as a Survivor player, the same will not happen for David Sampson. The guy is not just a jerk, but a morally corrupt jerk. And he’s not even named Brian!]

So David Sampson sucks. But you know also sucks? Everyone else on the Brians tribe. Even – and perhaps especially – nuclear engineer J’tia, who’s sorry attempt at designing a shelter is downright Rupertian. Apparently being a nuclear engineer somehow provides as much qualification to build a shelter as seeing The Lego Movie. Possibly less. Brians Tribe member Mama Kass certainly would agree (come to think of it, maybe J’Tia was the civil engineer behind Marlins Park). Garrett, having quickly found the Immunity Idol thanks to taking the clue, doesn’t seem to care about the shelter, but it’s not likely he would have otherwise.

While the Brians struggle to get their camp in order and David continues to stare at Garrett’s obliques while explaining that what he’s not wearing suit jacket, but rather a blazer worth more than your home, the Lloyd Braun‘s get off on a much better note, with real-life Ent Cliff Robinson immediately endearing himself to his tribemates with his trademark brand of being able reach higher than anyone else. Taking advantage of a stolen moment, and thinking she’s identified a kindred spirit, Sarah asks Tony if he too is a police officer. Tony, obviously a cop, denies the suggestion in a manner that makes it abundantly clear that he is a cop. “A cop? Who, me? Nah, nah, no way. Here’s a list of reasons why I couldn’t be a cop that only a cop would know.” While in seasons passed Phillip Sheppard (probably) lied about being a Former Federal Agent, Tony (and of course his name is Tony) inexplicably has chosen to hide the fact he’s a police officer, even though he was selected for the Lloyd Braun tribe in large part for that very reason. We really hope this guy sticks around a while. 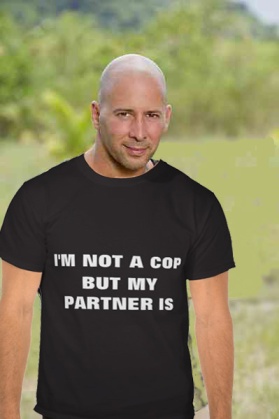 Also on the Lloyd Braun Tribe: our already favorite Survivor of all-time even if he never says another word or does anything of note, basketball enthusiast Woo!

And over on the Beauty Is Just A Label It’s So Unfair Tribe, things are going really well (yep, we’re still not above this).

After settling in – some tribes obviously better than others – it’s time for the first Immunity/Reward Challenge, where the Brians do nothing to convince anyone that they possess anything other than mental strength, and even that is called into question. And Probst, in his 28th season, calls the challenge like someone who isn’t afraid of losing his job, absolutely lambasting the Brians for their utter ineptitude. It would have been amusing, if it wasn’t so sad.

So, like their shelter, the Brians collapse and are the first tribe to attend Tribal Council. You might think that we were hoping David would stick around for a few weeks, just as a kind-of whipping boy, a penance for the wrong he wrought upon so many good baseball fans. But we really just want to see the guy go home. And, luckily, despite David’s renewed attempts to remove Garrett, justice is served.

So Goliath slayed David, and Goliath is feeling preeetty good about it.

However, Garrett can’t recline in the daisies for too long, because THE GAME IS STILL AFOOT (or two episodes back-to-back)!

And Tony is up to his total non-cop tricks, utilizing a little tactic he learned in the Police Academy movies and building a #spyshack. If there ever was going to be a Survivor spin-off, please let it star Tony (and maybe co-starring self-described “ultimate wing-man” Brice?). 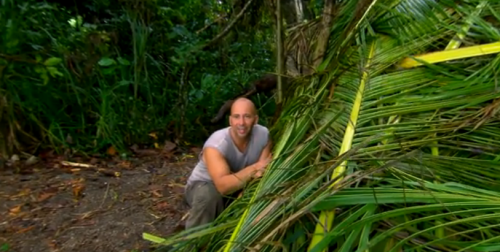 Back over on the we’re Beautiful on the Inside Too! Tribe, Morgan continues to use her assets to endear herself to her tribemates. Wearing “bowling socks?” Smart move. Maybe she really is a Brian after all (Jeremiah, maybe not so much)!

After failing as an architect, J’Tia looks to redeem herself by handling the puzzle portion in the next, all-important, Immunity/Reward Challenge. And, unfortunately for the Brian Tribe, J’Tia is pretty much Frank Lloyd Wright when compared to her puzzle-solving performance, or, rather, lack thereof. Once again, it’s a dismal effort from the Brians tribe (and a heroic one for Beauty LJ), and they’re off to their second Tribal Council in as many episodes.

Now Garrett is a professional poker player, and that might seem like a great advantage in a game where bluffing is vital, where playing your cards close to your vest is paramount (indeed, this is why Garrett has yet to reveal his occupation to his tribemates) However, during a high-stakes poker tournament all the action happens on the table, you are forced to look each other in the eye (or, in many cases, in the sunglasses). You have the ability to pick up on a person’s tell, to isolate them and apply pressure (and, according to Garrett, you are served chicken and vegetables by women, the very definition of hedonism and indulgence). But in the game of Survivor you can always take a walk to fetch water, or head into the forest to collect wood, or stroll down to the shore to cool off. That is well outside of Garrett’s comfort zone, his strengths, so it’s no surprise that he suggests/demands that the Brians have an open forum in which they will all agree to vote out J’Tia that night and then not leave each other’s sight until it’s time for Tribal Council. Essentially, he tries to hold them hostage at the poker table, because as long as none of the girls can sneak away to plot against him, he’s holding all the cards.

Unfortunately, Garrett makes like a Jack of Spades and turns one eye, allowing Mama Kass and Tasha to escape down to the beach. He pursues them, in hopes of squelching any uprising against his throne, and, in doing so, makes himself a Suicide King, leaving admitted “mental patient”J’Tia,  alone at camp. What happens next can best be summarized in song.

Yep, she pulled a Brandon Hantz and poured out the rice right onto the fire, and not because she was going to surprise the Brians with a risotto. Little did she know that while she was sabotaging her tribe – and her chances for staying in the game – Tasha and Mama Kass were making plans to oust Garrett. Well, no way that’ll happen now.

J’Tia!
The Brians Tribe saved J’Tia,
And somehow that “brain”
Is still in the game.
J’Tia!

And Garrett, much to his immense surprise, was beaten by a pair of deuces on the river or something. Even with an Immunity Idol up his sleeve.

Which brings us, finally, to our first A-B-C of Survivor: Cagayanandonandon:

After the Brians public forum Garrett was seen munching down on some kind of weird, crunchy, radioactive pineapple, and if he only remained focused on staying at camp and masticating, then J’Tia wouldn’t have had the opportunity to destroy all the rice. That might not have saved Garrett from elimination, but at least he might have eaten some rice before Jeff snuffed his torch and asked him to leave the poker table immediately. 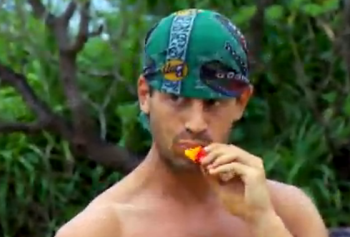 TIME TO CASH OUT, BITCH.

One response to “‘Suvivor: Cagayan’ Premiere – A Funny Thing Happened on the Way to the Open Forum”