Mayors, and politicians in general, usually possess the stereotype of being buttoned up, polished, careful with their words and actions. They’re not usually schlubby Jews with thick Noo Yawk accents and the kind of appearance that more resembles the Uncle at your Bar Matzvah who drinks too much Kiddush wine, commandeers the microphone and tells hackneyed jokes than the leader of the most influential city in the world. But former New York City Mayor Ed Koch, who died early this morning, defied those stereotypes, and many others. Indeed, had you presented a four-year-old me with a photo of our Uncle Morty side-by-side with one of Koch we would have been hard-pressed to tell the difference, and that, perhaps, speaks to his appeal and to his legacy.

There are two real cornerstones that shaped our youth and who we are today: The Mets and the Muppets. And Koch had a history with both of them. Before we every really knew Ed Koch as the outspoken Mayor of New York City, we knew him as a Mets fan, an old guy in a Mets hat who seemed to be of some import but we weren’t really certain what. Our first memory of the late Mayor is probably his brief appearance in the 1986 Mets music video “Let’s Go Mets Go,” popping up next to NYC luminaries such as Robert Klein, Howard Stern, Twisted Sister and Gene Shalit, seeming more like a crazy, die-hard fan than a political heavyweight. But Koch proved you could be both simultaneously, and few reveled in the Mets World Series victory more than Koch. You can accuse some politicians of feigning allegiance to their local teams, especially in times of triumph, but you can’t say that about Koch and the ’86 Mets.

Our other early memory of Koch – and something of a rite of passage for NYC Mayors – was his work with the Muppets, offering a cameo in The Muppets Take Manhattan. Certainly, a Muppet film taking place in the country’s largest city would require an appearance from its leader. But that much, a rote cameo, was somewhat perfunctory. What was special about this particular cameo was that Koch felt right with the Muppets, that his off-kilter brand of governing was somehow complimentary to the bizarre, left-of-center sensibility of the Muppets. They were, in a way, a natural match, with Koch even appearing in “The Great Muppet Look-Alike Contest,” a feature in a 1983 issue of Muppet Magazine, paired up with Gonzo naturally. And he was right at home sparring with Gonzo again in Muppets Take Manhattan.

We’re too young to have really understand Koch’s impact as Mayor of New York City. We think he generally did a good job, but that might be because we like him, because he remained a visible, outspoken presence in NY life. We’re not even familiar with his hosting turn on SNL, the third piece of the triptych that helped define our personality along with Mets and the Muppets. But we know that he was a fan of and a part of two things that we love, that are a part of our very makeup. And he’s also an integral part of another strand of our DNA, New York City. We’ve come to love this city the way that Koch did for so many decades. He was a quintessential New Yorker, a wise-cracking, tough-talking, bald-headed Jew who became Mayor.

Only in New York.

Filed under Checks & Balances, In Memoriam, Intersection of the venn diagram of things that I love, Local Flavor, Matt Christopher Books

Jim Carrey, ‘SNL’: No One Does a Thicke! 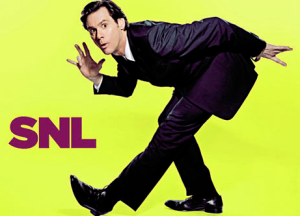 Well, we weren’t devastated.  Maybe it was because we were still ecstatic from the Jets victory, and that residual giddiness made us a little more lenient, a little looser (the beers couldn’t have hurt either).  Whatever it was, we were in a good mood, and Jim Carrey’s return to SNL didn’t ruin it.  It wasn’t a landmark episode, or a groundbreaking night, nor did they seem that they were fully back from vacation.  But, given our lofty, unrealistic, expectations, it was satisfying.  And (unfortunately), that’s enough.

And let’s, for a change, start at the top.  We often completely ignore the cold open when reviewing SNL, because it’s usually one of the weakest, least memorable parts of the show, certainly in non-election years.  We can’t pinpoint when it started exactly, but perhaps it’s been since the great Bush-Gore battle of 2000 that the cold open has almost felt obligated to be political sketch.  Often times that’s made for great, funny television (Amy Poehler as Hillary Clinton, Tina Fey as Sarah Palin, occasionally Jason Sudeikis as Joe Biden), but more often than not we’re treated to a mildly amusing address from by Fred Armisen as President Obama.  It’s become predictable and somewhat boring.  So what a surprise it was for the show to begin and discover Armisen not as Obama but as NYC Mayor Michael Bloomberg.