Must Flee TV: Managing Expectations – An Uneven Season of ‘The Office’ Comes to the Close

This week we’re looking back on the just completed/completing seasons of NBC’s Thursday night comedies.  Today we check in the senior member of the team, ‘The Office.’ 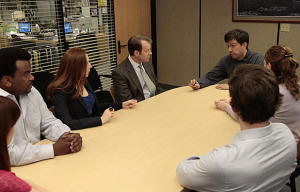 For quite some time we were religious with our Office recaps, but then two things happened 1) we were working a paid job more than full-time and 2) the show became, well, inessential.  We hoped to check-in during Steve Carell’s final season, but analyses was few and far between.  But even though we weren’t providing regular reviews, the series was still required viewing.  We might not follow-up the next morning with our thoughts, but we were still going out of our way to watch it Thursday night, as much out of habit as desire.  But this season, with Carell’s Michael Scott off to Colorado, the show became the least appealing, least critical member of the lineup.  Wait til Friday to watch Community?  We’d rather not.  Skip an episode of Parks  and Rec?  No way.  But go a week without watching the latest The Office?  Sure.  View an episode of Robert California’s Dunder Mifflin out-of-order?  Fine.  We just didn’t care that much anymore.

But a funny thing happened at the end of The Office’s eighth season.  We were actually invested.  We almost felt things, things that just nearly came close to approximating the real emotions that the show’s best seasons elicited.  For the first time all year, the series seemed to find its voice.

END_OF_DOCUMENT_TOKEN_TO_BE_REPLACED

Filed under Analysis, Back to the Past, Dunder Mifflin, this is Pam, Good Humor, Must Flee TV, Must See TV

Who’s Ripping Us Off Now?

With the new fall TV season almost upon us (did you see the “new” promo for NBC’s Wednesday & Thursday night comedies?), we thought we’d offer our first The Office related post in quite sometime.  But this one is less about them and more about us.

It came to our attention shortly after the conclusion of last season that NY Mag‘s Fug Girls (of their “The Cut” blog.  Yes, we do occasionally read (and watch shows) about fashion),

had offered a side-by-side comparison of the employees of Dunder Mifflin’s changing styles during their seven seasons in front of the “documentary” cameras.  It was engaging, well-researched, and totally spot-on  It was also VERY familiar, as we had (twice!) previously posted our own visual essay on the stark physical transformations experienced by the Office cast.   Sure, The Fug Girls presented their findings in attractive slide-show fashion, but we find the single page model much easier and efficient (and we’re not about forcing you into

clicking through a dozen panels just to drive up our page views).  The truth is, we both did a great job distilling the pygmalion like evolution of these characters, and each post has its merits.  So, you know what, we’ll just go ahead let you decide.

Ours: Who Are These People?

Theirs: The Fug Girls Compare The Office Drones’ Style Sense, Then & Now

Filed under Dunder Mifflin, this is Pam, Fashion Show at Lunch, Rip-off

‘The Office’: Who Are These People???

With a new The Office tonight, we wanted to repost, by itself, the Office then-and-now comparisons we included in last week’s recap. We felt it deserved its own moment in the sun.

The transformation of Dwight [in last week’s episode] reminded us of a troubling trend within the show itself.  While this episode showed Dwight being made over into a glasses-less, monochromatic tie-free aristocrat, The Office has to some degree been making over Dwight and its other characters over the course of its run.  Characters should grow and change and evolve, but it should always serve the story.  However, if you look at the physical appearances of the actors, they look more glamorous and polished now than they did at the start of the series, and not necessarily because the characters have improved their style.  It’s a concerning phenomenon, and we hope it doesn’t point to the actors themselves, the stars of the shows, objecting to the dour, depressing style that defined the early seasons of the show and its progenitor.  Behold, a side-by-side comparison:

Like we said, characters change, that’s a given.  Their looks, their hairstyle, their clothes, their personality all change.   We want that.  We don’t want static characters.  That’s lesson #1.  But, at the same time, it would be disappointing if the appearance of these characters is due in part to the actors’ vanity.  Are we seeing Jim Halpert or John Krasinski?  The UK original was known for its gritty look, an anti-network sheen, bordering on depressing.  And the first two seasons of the American version adhered to this (albeit in a less severe form), allowing for somewhat schlubby characters and grubby visuals (as much as network TV allows).  But over time that’s changed, and the show glistens now in a way it didn’t before.  And in some respects the storylines and tone have changed as well, gussied up and simplified.  Now the show doesn’t need to return to its original look, throw out the new wardrobe and ban make-up.  But it needs to remember where it came from.  And where it originally was going.

Filed under Dunder Mifflin, this is Pam, Fashion Show at Lunch, Flashback!, Makes You Think 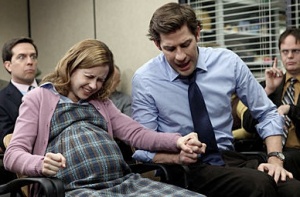 Back in October The Office invited us to Pam and Jim’s wedding, an hour-long special event that had been hyped on NBC and in our hearts, and against unlikely odds that episode actually mostly succeeded.  It wasn’t a runaway success, but considering the expectations and the level of difficulty, it was generally a victory.  That episode was really the first part of a Pam/Jim seminal event season, with the bookend to their wedding being the birth of their first child.  However, since the wedding The Office has kind of skid off the tracks.  So then with last night’s episode, another hour-long affair, I was hoping that this would be the moment that they right the ship.

Unfortunately, that didn’t happen.  And whereas the wedding was a modest achievement, this felt like an unsettling disappointment.  What should have been a special, moving episode, and a return to form, turned out to be a case study of the show’s recent flaws.  Everything that has been frustrating as of late was front and center in “The Delivery.”

END_OF_DOCUMENT_TOKEN_TO_BE_REPLACED

Filed under Analysis, Dunder Mifflin, this is Pam, Must See TV

Teeter Tots: Up and Down with Mr. Scott the Benefactor

At the risk of getting very repetitive we’ll quickly revisit our season long question:  Which Michael Scott did we see in the latest Office installment, “Scott’s Tots?”  Well-meaning but confused and ill-prepared Michael or malicious, self-absorbed, cripplingly myopic Michael?  Well, as usual, and  probably as it should be, we were served some of both.  But, as we’ll see, we at least ended with the more preferable of the two.

I didn’t mind this episode, but it also didn’t seem especially funny.  Whereas I was in a social environment when I initially viewed “Mafia” from earlier this season, and even laughed heartily at it, I knew very quickly that episode wasn’t that humorous, at least not that good.  On other hand, I watched “Scott’s Tots” alone at 2 in the morning which, I admit, could have been a detriment (I did, however, enjoy some leftover birthday ice cream cake, so, despite the hour, I still managed to fulfill my Office watching pre-requisite of either ice cream or NY pizza (and when I say NY Pizza I don’t mean “NY Pizza,” the moniker that every pizza place outside of NY throws onto its marquee in hopes of tricking the consumer into thinking their product is comparable to the thin, crispy, cheesy, heavenly Big Apple standard, and not what it really is, an inferior copy.  Rule of thumb: if some pizza joint beyond the tri-state area bills their product as “NY Pizza,” you’re probably going to be disappointed.  Also, unless they serve slices, it’s not NY Pizza.  And now back to our regularly scheduled blogging));  perhaps I wouldn’t feel so ambivalent about it had I watched before midnight with a crowd.  Still, my intuition says that it would have been the same.  Not particularly hilarious, but, actually, a nice little episode, and the kind of more authentic offering that has been sorely needed of late.

END_OF_DOCUMENT_TOKEN_TO_BE_REPLACED

Filed under Analysis, Dunder Mifflin, this is Pam, Good Humor, Must See TV

One last note on yesterday’s discussion about Michael Scott and the inverse relationship between his inanity to the quality of The Office (and then we’ll leave the show alone until next week).  Just came across a post from Time TV columnist James Poniewozik, who essentially argued the same thing in his round-up of the best comedies currently on air.  However, we disagreed about which Michael showed up in last night’s episode.  Poneiwoznik asserts that “Double Date”s main problem was that it fed us the “too crazy” Michael.  While I agree that it was just a “decent” episode, I don’t think it was because of an over-the-line Michael.  Indeed, he straddled the line, but he ultimately came down on the side of tolerable.  Instead what I think made this just a decent episode is that, as Alan Sepinwall notes, “the episode really didn’t know how to end.”  I wonder if there was a big debate about whether Pam should actually hit Michael.  Oscar belittles Kevin for betting on Pam, remarking that there is no way she can lose.  But, as we saw, by (eventually) slapping him she did lose.  They both lost.  Perhaps it would have been better for Pam to just walk away, but  I guess that would be the old Pam.  And while the Michael-Helene romance was never going to last, it did feel a bit tossed off.  I only wish the Michael-Jan affair could have ended just as quick.

Similarly, and to a greater degree, the B story with Dwight and Andy constantly trying to out-polite each other turned out to be a dead-end.  It was amusing, if a bit too silly, but while it seemed to be leading up to a reveal of some evil Dwight plan, it just escalated to nowhere.  This was far more of a let down than the Pam/Michael showdown.

Filed under Dunder Mifflin, this is Pam, Other people's stuff