Muppet Monday: Our Long-Awaited Thoughts on the Impending Arrival of ‘The Muppets:’ Or Why We’re Dreading the Thing We Wanted More Than Anything Else

In two days The Muppets will return to theaters after more than a decade away from the big screen.  It seems like just yesterday that we were salivating over the whispers of a Muppet resurrection orchestrated by Jason Segel (yes, that Jason Segel).  After spending years on the brink of obsolescence – thanks to bad business deals, changing tastes, the boom of CGI, and general Hollywood bureaucracy – it began to seem like the Muppets would never be given the opportunity to recapture the glory they once possessed, that they would forever be relegated to an aging, evermore antiquated attraction at Disneyland, and truly exist only on DVD and in the hearts and memories of people over 25.  We yearned for their return, and while we never imagined their savior would be a geek in shining armor like Segel, we were thrilled when the rumors began to circulate that someone who grew up on the Muppets, someone who loved and cherished them as much as we did, was going to resuscitate them.  Not some out of touch, graying puppeteers, or even the Henson family, but someone with a fresh, relevant perspective whose primary hope was to honor the spirit and style of Jim Henson.  We could not have been more excited.

And now, with The Muppets about to unspool at theaters across the country, what we feel is not excitement, but trepidation.  Why? Because of this: 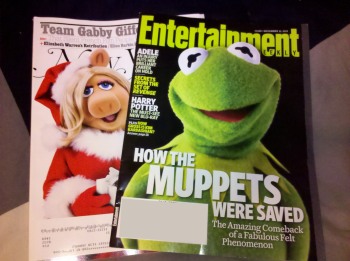 Certainly you’re saying to yourself “Um…why would you bothered or alarmed by this?  Shouldn’t you be over the moon that the Muppets are on the cover of not one but two pretty big magazines?  That they’ve catapulted back to the forefront of the pop culture consciousness?”  And, in a vacuum, you’d be right.  We’d love nothing more than the Muppets to steal back a share of the zeitgeist from the Lightning McQueens, and the Harry Potters, and the Bellas, and the Biebers.  But our overwhelming notion these last few months is that it’s too much too soon.  Let’s not overhype this; let’s just be happy to have a chance at redemption.  Let’s not give the backlash machine – bloggers, critics, Facebook statuses – the chance to pile on barbs and disapproval even before the film comes out.  If, when it’s released on Wednesday, The Muppets is excellent and becomes a hit, then by all means let’s celebrate it.  Let’s make Kermit Time magazine’s Man of the Year, let’s have Fozzie Bear replace Regis, let’s indeed have the Muppets host the Oscars (or at least co-host with the ever increasingly Muppet Billy Crystal).  But, until then, let’s reserve judgement, contain our enthusiasm, and not count any magazine covers before their hatched.

But we’d be lying if we said there wasn’t anymore to this.  Indeed, our hesitation goes beyond the fear of overhyping.  No, it’s deeper than that.  It’s our considerable dread that this might be a case of “be careful what you wish for.”  Because what if it’s not good?  Then what?  They’re not going to get too many more shots at this.  In fact, this could be their last main event.  If this fails, then the Muppets might be permanently assigned to made-for-TV movies and Disneyland commercials and, if they’re lucky, a Macy’s Thanksgiving Day Parade balloon. They’ll live on, but their best and biggest days will forever be behind them.  In that respect, if The Muppets falters, well, then, that very well may be the death of “The Muppets.”

The good news is that the early returns have been overwhelmingly positive, and our fears might have been for naught, wholly unnecessary fretting.  Then again, we can’t seem to get past the fact that Frank Oz – the voice of Ms. Piggy and Fozzie Bear, and Jim Henson’s closest collaborator – refused to participate in the film, and has distanced himself from it.  If he finds Segel’s vision inappropriate, his tone incongruous, then how could the film possibly pay tribute to Henson?  Could Segel be more in tune with Henson’s spirit than Henson’s right-hand (no pun intended) man?  Or could this perhaps be a case of an older, jaded, out-of-touch and maybe even resentful puppeteer presenting opposition out of spite, bitter that he was not tasked with ushering the Muppets out of obscurity?  That could very well be true, that for Oz it was all or nothing.  Either he would carry the Muppet torch by himself or he’d stay entirely in the dark, no matter how brightly Segel’s creation shone.

We’ll find out for sure soon.  And with the Muppets numerous appearances in the last week, we’re still on the fence, oscillating between siding with Oz and feeling confident in Segel’s approach.  While Oz has apparently decried Fozzie’s accessory of fart shoes in the new movie, Entertainment Weekly‘s feature article on the film astutely points out the Muppets affection for whoopee cushions (approx 02:58), so it would seem that Oz is somewhat off-base, ascribing to revisionist history.  Then again, while we enjoyed this segment on last weekend’s “Weekend Update,” we couldn’t help feel that this version of Kermit, joining SNL‘s Seth Meyer’s, was too caustic, too – dare we say it? – snarky.  Would the Kermit that was an extension of Jim Henson’s arm ever make a crack about kids being fat in order to set up a sausage-Miss Piggy joke?  We don’t think so, and we can’t help but find that dissonance from the warm, gentle Kermit we know so well somewhat disturbing.  Listen, we’re not looking for Sesame Street here.  We’re not looking for vanilla, innocuous, inoffensive, neutered entertainment.  That’s not the Muppets.  But neither is cynicism, neither is malice.

BUT perhaps that instance is the exception (although, the resentful attitude offered by not just Kermit but also Miss Piggy, Fozzie, Gonzo and Rowlf in Segel’s monologue was also a bit off-putting), as just two nights before Kermit and Piggy joined Jimmy Fallon, Martin Short and Michael Stipe for a game of Password that was about as fun, silly, earnest and Muppets as it gets.  So there is hope.

And if the Muppets are about anything, it’s hope right?  Isn’t that what the Rainbow Connection was all about?  The Lovers, the Dreamers, and Us.

Filed under Be careful what you wish for, Bert-n-Ernie, Flashback!, Freak Out Control, Muppet Mondays, Muppets, Saturday Night Live, The Big Screen